​​Irpin resident: I’d like it if this had never started 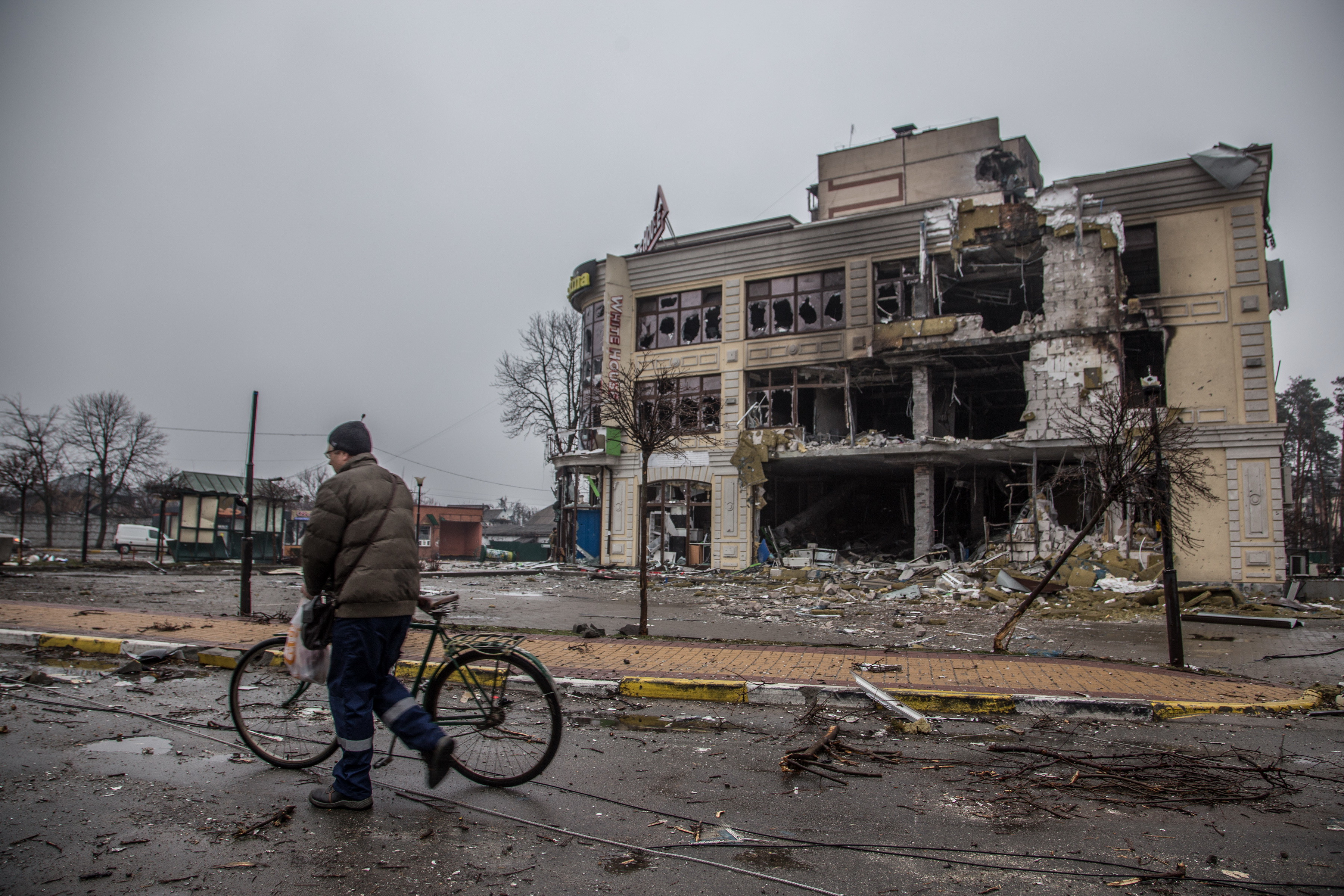 ​​Irpin resident: I’d like it if this had never started

The evacuation of war-torn Irpin in the suburbs of Kyiv is ongoing. Three thousand people left on March 8 alone.

A snow storm lashes the first people walking over the river crossing. It is slippery and harder to walk on the wooden planks than usual. Elderly people, a large proportion of those leaving the city, take small steps to get to the other side of the river. They are at times paralyzed by fear, creating a line behind them.

This was the case with an old woman who every now and then squealed with fear. A policeman held her hands and led her over the boards. Those who were unable to walk were carried over on the officers’ backs or moved on stretchers. “One, two, three, hop!” — said the policeman before he took one of the pensioners. On Women’s day, March 8, A police officer gave his best wishes to a woman who quickly negotiated the crossing.

She smiled and thanked him without slowing down. Another admitted that she was afraid, to which officers responded that she was now safe. Some walked completely without luggage, others had a single suitcase, bag or backpack, and there were also those who walked across with animals. Dogs, as frightened as humans, walked reluctantly on the narrow planks.

Another evacuation from Irpin began at 10 am. The city of 70,000 residents is located just beyond the borders of Kyiv. During the early days of the Russian invasion that began on  February 24, Ukrainian troops blew up the bridge in order to make it more difficult for Russian troops to attack the capital. Crossing the ruined bridge has now become the only escape route. The city — as mayor Oleksandr Markushyn said on March 7 — is 30% occupied by Russian troops.

Minibuses waited for evacuees not far from the bridge. A round fired from Russian-controlled territory fell in this area on March 6. It killed a family of four: a husband, wife and their two children. Their suitcase is still on the ground. “Children” and “people” are written on the minibuses. They take inhabitants of Irpin to Kyiv, where they can then take buses to the train station.

Sixty-nine-year old Valentyn, his seventy year old wife Nadiya, and thirty two year old son Ilya got out of a minibus. They were drinking tea distributed by volunteers. Although the evacuation had already been ongoing for several days, they decided to leave only on March 8. They hoped the situation would calm down, but it only got worse. During the first days of fighting, they went down to the basement of their apartment building. However, they quickly fell ill  because of the cold and had to go back to their apartment to get back on their feet.

Meanwhile fighting around Irpin intensified, with rifles now being utilized in addition to cannons. Artillery wreaked havoc on the surrounding buildings. Finally, Russians appeared two streets away. Perhaps Valentyn’s family would have stayed in Irpin longer if their gas had not been cut off. They don’t know if it was simply shut down in the city or if gas pipelines were damaged during the fighting.

“We still had food, but no way to prepare it,” says Nadiya. “Before the gas was cut off, tap water stopped too.”

“There was no internet or cell phone signal,” adds Ilya.

“It is completely impossible to live without gas. Yesterday I fried six kilos of meat. I left everything for the neighbors. We had food because we had stocked up. For example, buckwheat in kilogram bags. But how will you prepare it?” Nadiya continues.

They stopped receiving information for three days. They did not know that an evacuation was taking place that day. They just happened upon it. They gave their food to the neighbors who are staying in Irpin for the time being. The family listened. It was quiet. There was no shelling. They managed to bring small backpacks into which they had to stuff their most valuable belongings. They moved quickly.

According to Walentyn, it is above all people who are not able to reach the crossing on their own that have not left Irpin. Most often these are people of advanced age. Inhabitants of Irpin must typically travel several kilometers to reach the blown up bridge. “There are no more cars. Some left, others abandoned theirs,” he says.

The family had no idea where they would go. They will stay in Kyiv for now but they do not rule out setting off for someplace further away. Part of the family lives in Krakow, so maybe there.

I ask Valentin if he hopes that the war will end soon. He replies: “Mostly, I’d like it if this had never started.”