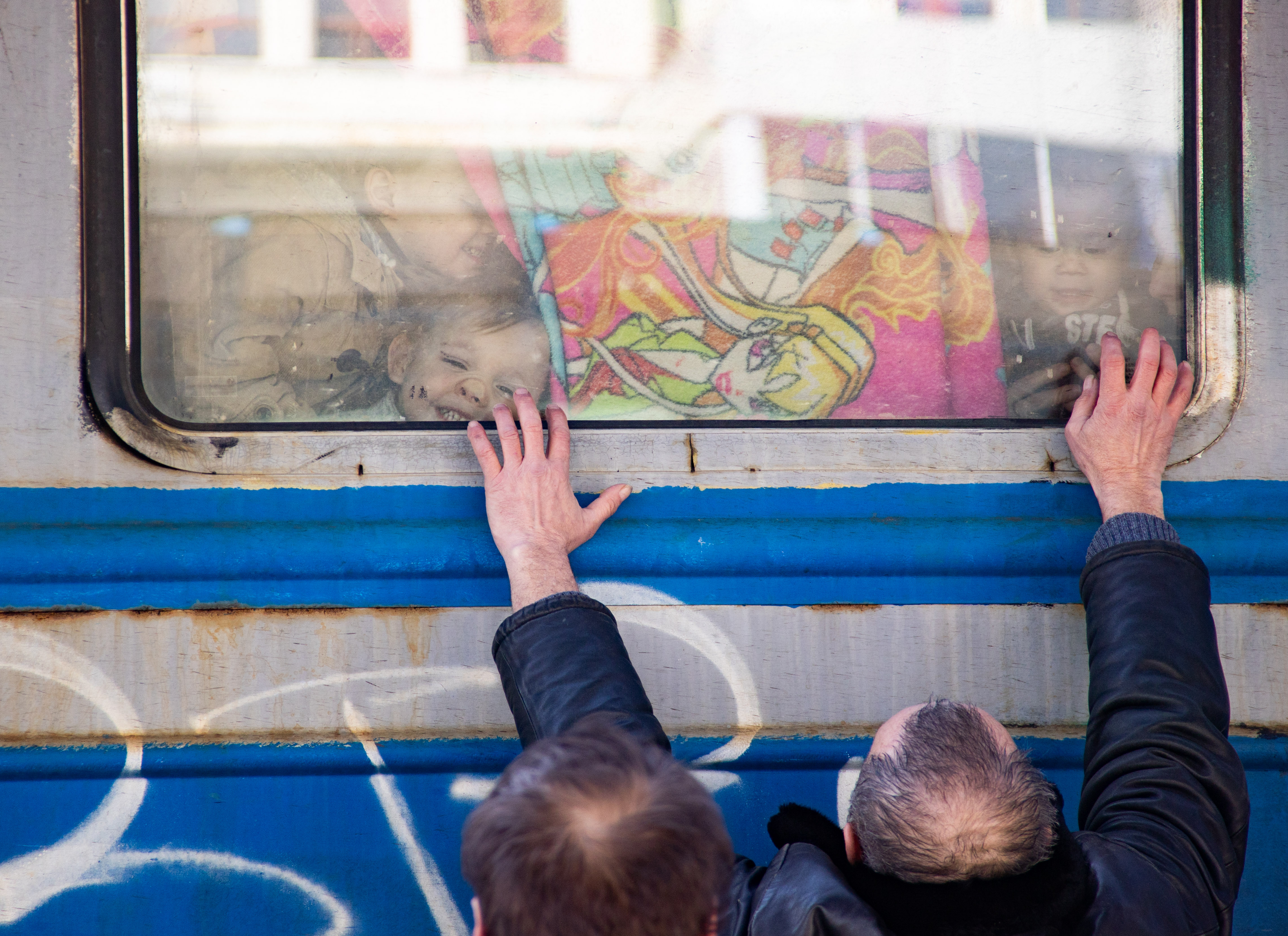 The situation in the Donbas is worsening. The authorities are appealing to the inhabitants to leave for safer regions of Ukraine.

Over a thousand people wait for evacuation trains at the station in Kramatorsk. Among them, women, children and the elderly. Men of draft age only come to escort their families, help them with their luggage and depart after giving them a hug. Families stand in line. They patiently wait for their turn, despite their emotions.

Svyatoslav Vakarchuk, one of the most famous pop music performers in Ukraine and frontman of the band Okean Elzy, approaches those who are leaving. He travels to various Ukrainian cities, bringing humanitarian aid and lifting the spirits of those who find themselves in a difficult situation. There is commotion when Vakarchuk appears in a crowd, as if everyone has temporarily forgotten that they are leaving their homes, perhaps forever.

“I’m glad to see you!” says one of those departing.

“I am also happy,” replies Vakarchuk.

In a moment they are posing together while her friend takes a photo.

“Why don’t you sing?” a woman in line asks dolefully.

“We will come to your house,” someone jokes.

“Everyone can come. I can leave my mother’s phone number,” says Vakarchuk.

The authorities urge: leave the city

Although the authorities of the Donetsk region have long been calling for inhabitants to leave Kramatorsk, it is only now that more people from this city and its vicinity have decided to leave their homes.

According to the General Staff of Ukraine, Russian troops withdrew from the Kyiv, Chernihiv and Sumy oblasts to focus on capturing Kharkiv and the entirety of the Donbas.

It was in the Donbas, as the Donetsk and Luhansk oblasts are commonly known, that the 2014 war between Ukraine, and Russia and its puppet republics began. As of February 24, 2022, at least 13,000 people had died here. Kramatorsk was one of the first cities to be seized by separatists supported by Russian soldiers. The offensive that started in this region on February 24 may now be decided. Russian troops are trying to cut off and occupy the Donbas.

Lviv is waiting for you

Vakarchuk enters the crowded train station and is greeted by applause. He stands on a chair so that he can be seen better. He persuades people to leave and assures those who want to go to Lviv that the city is waiting for them with open arms. The singer grew up and spent a significant part of his life in this West Ukrainian city.

“The people there are very friendly, they all love you very much and are worried. That is why you will go there and feel at home,” he says to the assemblage. He asks them not to worry if they fail to board the first train. They will make it on the next one because, as he assures, the evacuation will continue.

“The war will end, the Ukrainian army will win…” Vakarchuk says, but people interrupt him with a wave of applause. “…it’ll do it so that you can return to your homes.

When the day comes, the war will end

After ending the speech with the slogan, “Glory to Ukraine – Glory to Heroes!” Vakarchuk says:

“My guitar is far away in the car, so I’ll just sing.”

“When the war ends!” screams another, hoping to convince the singer to sing “Embrace”, which has become very popular again since February.

“You want that one?”

Vakarchuk on the chair sings:

When the day comes

The war will end

There I lost myself

I looked down to the bottom

Embrace me, embrace less, embrace me

So gently and don’t let go

May your spring come soon

People sing along with Vakarchuk during the chorus, some of their eyes filling with tears, refraining from crying.

People move towards the wagons after Vakarchuk’s performance. They try to find a seat on the rapidly filling train. Those who remain on the platform wait hopefully for the next one. The star’s visit momentarily made their departure—often into the unknown, where they have no contacts, family or friends—more pleasant . Most of the inhabitants of Kramatorsk and the surrounding towns have still not dared to take this step. They hope that by some miracle the war will bypass their homes after all.

That night, the tracks near Kramatorsk were damaged as a result of attacks. The evacuation was temporarily suspended.