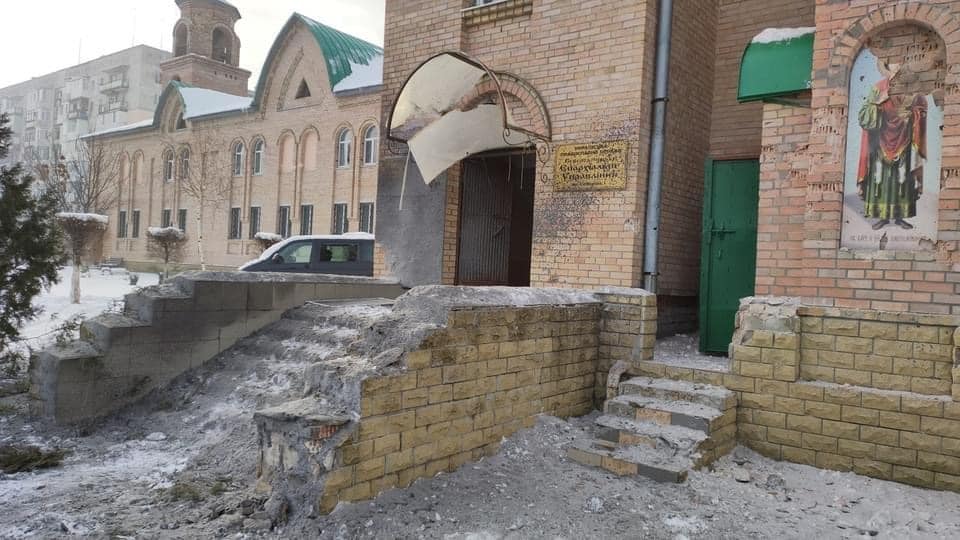 The Russians are preparing for a major offensive in the Donbas. Missiles and rockets fall on front-line towns every day.

Shot-up and burnt-out buildings, broken windows, rubble scattered all over, the thunder of cannons and the whistle of missiles have already become part of the landscape of Severodonetsk, the temporary capital of the Luhansk oblast.

Until recently, over 100,000 people lived in the city. Now less than a fifth of them remain. One encounters people in the streets sporadically, because most of those who remain are hiding in cellars. Some buildings have the words “People” written on them.

Serhiy, 65, and seven of his neighbors, men and women with whom he is hiding in the basement of their house, did not want to do this. They believe that bringing attention to themselves can only be dangerous. “It’ll cause a rocket to fly in,” adds 72-year-old Yuri.

Their basement consists of several rooms and a long corridor that leads to basements under other staircases. Sometimes a faint glow reaches them from the basements so neighbors suspect someone is living there too — but they’ve never checked.

A missile had breached the roof of their house, and the shockwave blew out the window panes. Another projectile had hit one of the nearby buildings in such a way that it tore the walls and the roof off of a corner apartment. There was a fire, but no one came to put it out, so much of it burned down. The residents now have nowhere to return to.

Severodonetsk, like other cities in the Luhansk region, has found itself under heavy fire. It slowly turns to rubble. The Russians, standing not far from gates, are preparing for a great offensive on Donbas, i.e. the parts of the Donetsk and Luhansk oblasts controlled by Ukraine. The inhabitants of Severodonetsk are convinced that the worst is yet to come.

Give them flowers for what?

In the basement, in addition to eight people, there are also two dogs, a cat and a parrot.

People and animals are reluctant to go outside. They sit underground, rarely seeing the sun. The temperature here is around 11 degrees Celsius. The sounds of explosions even reach underground.

When one of them reverberates, a woman dwelling in the basement says only: “Oh, it has already flown over to us somewhere.”

They have electricity here, so they aren’t sitting in complete darkness. They can also prepare hot meals on the electric stove. Shops are closed, but they have their own supplies. In addition, volunteers have brought humanitarian aid twice. One of the neighbors will occasionally go to the city center to get drinking water.

Serhiy has completely lost track of time. He asks a neighbor for the hour. He further inquires whether that indicates day or the night. The whole situation makes him angry. Soon after February 24, the day the Russian offensive began, Severodonetsk became a battleground. He is suffering incomparably more than eight years before, when war had broken out in Donbas.

“Putin is coming here. Supposedly to set me free. So why is he destroying everything? He can kill me, destroy my apartment and ruin my life,” says Serhiy. “What do I need him for here with such liberation? He thought he would be greeted with flowers, but no one does.”

“Give him flowers for what? For all this?” A neighbor asks rhetorically.

Serhiy had a business engaged in, among other things, transporting people. He had five buses, but all of them were destroyed by one barrage.

Still, he wants to stay in the city. He asserts that he is not young enough to throw everything away and start over.

“Even if I was 50 years old, I would spit at all of this and go to Poland or to another country in the European Union. I would try to get a foothold there somehow,” he admits.

Another fear that motivates him and his neighbors to stay is the burned block near their house. It is like a warning. Because if something hits their house while they remain there, at least they will be able to try to extinguish it so that it does not all burn down.

“The most important thing is to live through the war and for the house to remain standing, as for the rest we’ll see,” says Serhiy. “Everything will be alright. Knock on wood.”

He knocks on the unpainted wood table top.

Not far from Serhiy’s cellar, a married couple, 57-year-old Larysa and 60-year-old Viktor, walk down the street. They pass the burnt apartment building and stare at it attentively. They walk slowly, ignoring the roar of artillery.

“We’re used to it. At the beginning, when there was a bang, we immediately ran to hide, and now we hear that it was a distant shot and it flew somewhere far away,” says Larysa.

This is how the majority of the inhabitants of Severodonetsk respond. Some of them sit on the benches in front of their block of flats, pensive. Others talk or just sit. They don’t even twitch or avert their gaze — as if they were sculptures of iron.

Viktor and Larysa say that this is the first time in a while that they have gone out onto the street. They do not want to do it often, because shelling is conducted from at least three directions and it is difficult to tell exactly where fire will fly in from.

The destruction has been most severe in the eastern and southern parts of the city, but missiles and rockets also fall on the western edge. The Russians are not selective — they hit houses, shops, markets, hospitals, schools and gas stations.

As per the Ukrainian authorities in the oblast, practically the entire infrastructure of the city has been destroyed here. There are no safe places in Severodonetsk.

You lie in wait for something to fall on your head

Larysa and Viktor emerged from shelter because they read on the Internet that a shell fell near the house where Larysa’s mother lived. The couple went to see what had happened and if the house was okay. As luck would have it, they didn’t find any damage. They were now on their way home.

If it is reasonably quiet, Viktor and Larysa spend time in their corner apartment on the third floor. There is only one story above them. When they saw the burned down apartment building, they understood what could happen to their home after a single strike.

Only when the shelling intensifies does the couple descend into the basement.

“During the day it is quiet until dinner…” adds Viktor.

“…but not always…” Larysa interjects.

“… then we lie down, sleep the night. You just fall asleep, and then something wallops and we jump out of bed.”

“We hear a shot and wait for it to fall on our head.”

Larysa and Viktor do not leave the house on a daily basis, even for humanitarian aid. They are afraid because several times already the distribution points have been shot at, with no regard for the people standing there. In April alone, the Russians did it twice, injuring at least five people.

Make myself at home again

It was sometime in the second half of March that Olena, 47, went for help. Suddenly there was a strike not far from her. The shockwave threw her to the ground and shrapnel from the shell pierced a hole through her leg.

She was dazed. Unable to walk, she crawled around calling for help. She was lucky that a man was passing by who called an ambulance. It came quickly. The shard hadn’t damaged the bone.

Olena has been in hospital for three weeks now, she has fresh bandages on her leg. She is alone in the city, with no family. She is an only child, and her father and mother both died years ago. Olena, as well as all the other patients on this floor, are looked after by one nurse and two orderlies. On the most difficult days, they struggle to cope with all the wounded patients. The rest of the staff left, fearing that Severodonetsk might be occupied by the Russians.

At least one hospital building has been hit so far. The shell got stuck in the roof. An entire floor is out of commission. The building where Olena is located has six floors and rises above the horizon. The sound of fighting constantly reaches the ears of the people staying here, who have come to terms with the fact that they can be shelled at any moment.

For Olena, these are still better conditions than at home.

“It’s a little quieter in the ward and our girls, the orderlies and the nurse, calm us down,” admits Olena.

However, the medical staff constantly asks the patients to go to safer parts of Ukraine. Olena didn’t want to hear anything about evacuating until a shell almost killed her. Now she is waiting to be able to stand on her feet. Then she will go to see if her house is intact, and after that she will leave.

Where? She has no idea. And although she has not left Severodonetsk yet, she is already thinking about how she will live in it again.

“Our city is beautiful. I would like to come back here and make myself at home in it again,” she admits.

For now, it is difficult to think about good times. The battle for Donbas is about to enter a new, even more terrible phase.