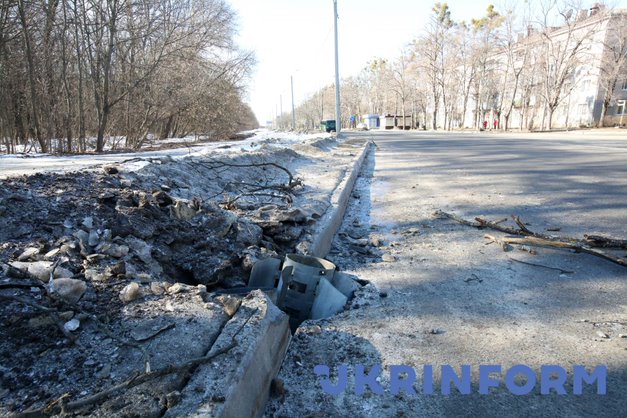 At five in the morning, I was awakened by bangs. The sound was unmistakable. I knew it had begun.

Tetiana, a middle-aged woman, engages me in conversation on the metro. This is the second hour that she has spent trying to get to Gagarin prospect in southern Kharkiv.

“There is no space in the marshrutkas [minibus taxis]. They’re all full. People with bags, dogs,” she says.

“Yesterday my friends with whom I have been staying returned their tickets to Lviv. They thought that nothing would happen for now; how long could they stay there and what would they do. In the evening we sat down to play our favorite board game. We were joking that it might be our last chance to play it. After midnight I watched a speech by the President of Ukraine, Volodymyr Zelenskyy, in which he addressed the Russians because—as he said—it is they who can stop the aggression.”

At five in the morning I was awakened by bangs. The sound was unmistakable . I knew it had begun. Tetiana on the subway had the same feeling. In 2014, a war that had lasted for eight years began in Slovyansk, where she lived, as a result of which at least 13,000 people have died. I jumped out of bed. The room my friends were sleeping in had windows facing the other side of the street. You couldn’t hear anything.

“It has started!” I shouted, immediately rousing them from slumber.

“Are you serious?” My friend replied incredulously.

At five o’clock in the morning, Kyiv time, explosions swept through many Ukrainian cities after Russian President Vladimir Putin announced a special operation in the Donbas. The State Border Service of Ukraine announced that the Ukrainian border was attacked in multiple oblasts: Luhansk, Sumy, Kharkiv, Chernihiv and Zhytomyr, as well as Crimea.

Though the atmosphere is tense, there is no sense of panic in the city. Soon after the echoes of clashes fell silent, some people were packing cars, moving their families out. The queues in front of ATMs incessantly grew longer. More and more people arrived at the metro stations with luggage (all train tickets immediately sold out in the morning)—bags, suitcases and backpacks. The difference was that almost everyone had a phone to their ear. They say, “Swieta is hysterical. Her husband is in the military,” “Maybe you can get some bread if there is any left,” “I don’t understand how they built this border wall if tanks are passing through.”

At one of the stations, a woman stands with a child and talks on the phone with someone. The voice on the phone must have asked her if she was leaving.

“Where to? All of Kharkiv will not leave, they will not kill everyone,” she says.

I am going back to my friends’ apartment. Like many today, they don’t know what to do—to leave or wait. All plans and hopes have crumbled to dust in one day.