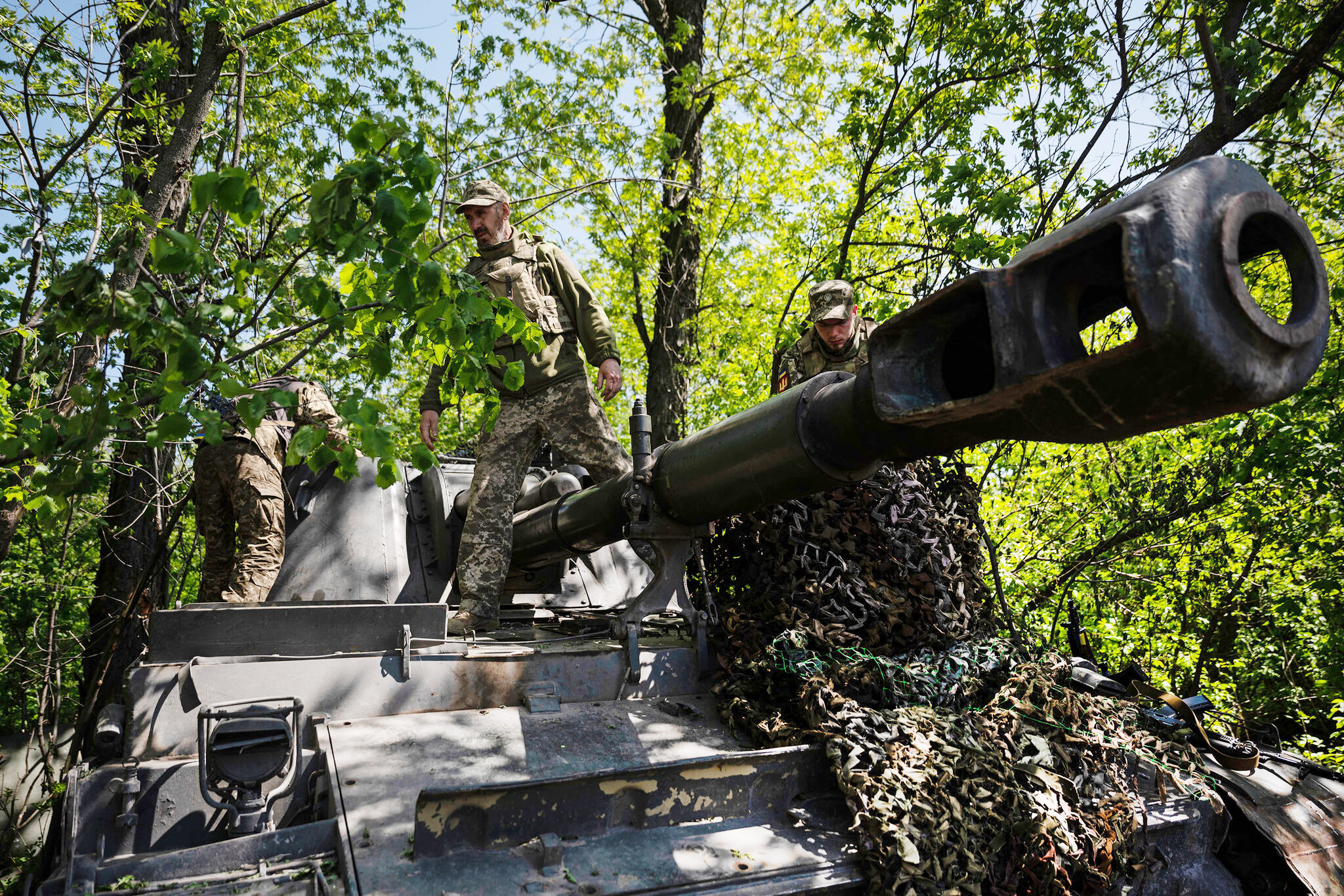 The Russian army is trying to cut off Donbas from the rest of Ukraine. Somewhere east of Kharkiv, on a now pivotal stretch of the front, Ukrainian troops are fighting to frustrate this plan.

There are no extensive, deep and winding trenches here, which are associated with war fronts. You can only see pits carved into the ground, covered with branches and hay, scattered over the territory sheltered by trees. It is there that soldiers can find a moment of respite, as well as shelter in case of danger. And it is incessant: artillery shells whistle overhead every so often.

“It flew over us,” says the 21-year-old soldier Serhiy after one such particularly loud whistling sound.

Serhiy admits that when it is really hot, they have already learned how to jump into the cavity at great speed. There they wait out the shelling, and then immediately go to their positions so as not to be surprised by a Russian diversionary-reconnaissance group. It can happen that, under the cover of artillery, such strike groups try to approach Ukrainian positions in order to surprise attack and break through.

Serhiy and Andriy are separated from the Russian army only by gentle hills and anti-tank mines deployed by Ukrainians.

“Their positions are over there. A tank sat there until yesterday,” indicates Andrij. “Every day they try to break through. They mainly use artillery and helicopters. They don’t send infantry because they won’t make it.

Here, on the northern section of the front—the one that today stretches hundreds of kilometers from the vicinity of Kharkiv in the north through Izyum, Rubizhne and Popasna in the east, to the steppe plains of the Zaporizhzhia and Mikolayiv Oblasts in the south—the Ukrainian army not only defends itself, but also counterattacks. It is trying to recapture the territories occupied by Russian troops in the first days and weeks of the invasion launched on February 24.

The key element of this stage of the conflict is Donbas: the same region in the eastern part of the country where Russia unleashed this war in the spring of 2014, creating two puppet quasi-states under its control. In turn, one of the key places deciding the result of the current battle for Donbas is where Serhiy and Andriy are fighting.

Although the Russian army has been pushed away from Kharkiv, it still controls a large part of the Kharkiv region. Because of this, the Russians can easily supply their troops, who are trying to attack the Donbas from the direction of the city of Izium (in the south-eastern part of the Kharkiv Oblast), already occupied by them. If the Russians succeed, they may cut off Donbas from the rest of Ukraine’s territories, and thus surround the Ukrainian grouping fighting there, estimated at tens of thousands of soldiers.

If, on the other hand, Ukrainian forces manage to push the Russians even further east of Kharkiv, then they may flank the Russian grouping attacking from the Izium region. If the Ukrainians succeeded, then the Russians themselves could be encircled.

At war, but close to home

At the beginning of the invasion, the Ukrainian 93rd Independent Mechanized Brigade “Kholodnyi Yar”, in which Andriy and Serhiy serve, resisted the Russian army in the Sumy Oblast. Then it was transferred here to the neighboring Kharkiv region.

The 93rd Brigade is one of the most experienced units in the Ukrainian army. It took part in key battles in the Donbas in 2014-15, such as those for Ilovaisk, the Donetsk airport and Debaltseve. Now too, from the first hours of the full-scale Russian offensive, “Kholodnyi Yar” constantly takes part in the fighting.

Serhiy has additional motivation to fight. The front line runs several dozen kilometers from his hometown. After what happened in Mariupol, Bucha and many other places, Serhiy realizes that barbarity can strike anyone. The number of civilian casualties and the scale of war crimes is still impossible to estimate.

His mother stayed at home and is currently making camouflage nets. She wants to somehow support her sons—because it is not only Serhiy; his younger brother too serves in the zone of military operations. When the opportunity arises, Serhiy talks to his mother on the phone. She assures him that she is not worried, that nothing is the matter. But sometimes she can’t take it and starts crying.

“I’m at war and close to home at the same time. That’s why I have to make a stand here and protect it,” says Serhiy.

Conditions at the positions are spartan. It is cool in the foxholes and there is not much space. The dugouts are quite shallow. They had deeper trenches in the Sumy Oblast, where they could hide properly and move freely. Here that is lacking—when a projectile is incoming, they must simply hit the dirt or jump into the nearest foxhole.

Serhiy does not complain about the monotony of war, the waiting and the long days.

“You come back from the post, you have a place to sleep and something to eat. We prepare food on the fire. If it wasn’t for the bulletproof vest and rifle it would be like a picnic here,” he tries to joke.

Avoid getting caught in the pincers

The lack of field fortifications is due to the fact that the soldiers took up these positions recently, and also due to the dynamics of this stage of the war.

Right up to February 24, clashes in Donbas took place in more or less the same positions that both sides had held since the beginning of 2015. They consistently strengthened them, knowing them like the inside of their own pocket. Trench warfare, usually of low intensity (which does not mean no casualties)—this is what the conflict in Donbas has looked like in recent years. Now the 93rd Brigade is fighting under different conditions.

23-year-old Oleksandr, despite his young age, is the commander of this hidden position on the edge of the forest. It is also demarcated by numerous holes hidden among the trees. Oleksandr has already been in the service for four years. However, he admits that the experience he has acquired in recent years is significantly different from what he has had to face after February 24.

“Before that it was trench warfare but now there are mobile actions. We are constantly on the move. It is rare for us to sit in one place for long. We used to spend eight to nine months in one position, moving only slightly. And now, in the last two months, we have already changed positions several dozen times,” explains Oleksandr.

In many places the frontline shifts almost daily, so there is no opportunity to strengthen it either. The scale of military operations and the arsenal used are also incomparable. The Russians now make extensive use of aviation, drones and long-range missiles. There are also massed artillery attacks. That is why infantry units rarely go into direct combat. They spend most of their time hiding, waiting and defending against enemy attacks.

“If the enemy breaks through, they’ll take us in a pincer.” However, I doubt they will succeed. We are doing everything so that this does not happen,” says Oleksandr.

Everyone was in a good mood that day at Oleksandr’s position. They sat around a wooden table and analyzed a successful tactical action: the people of his platoon had just managed to knock out a Russian infantry fighting vehicle (BMP); they hit it with a guided anti-tank missile. It was still on fire.

The platoon leader steered the drone over the site where the BMP was burning to confirm and record that it had indeed been destroyed. According to Ukrainian law, the destruction of such an enemy vehicle is subject to a financial award of almost 43,000 hryvnia (almost $1,500). The soldiers assure, however, that it is not money that motivates them.

“This is the best job in the world because we defend our land. What could be better? First we damaged a Kamaz truck, now we destroyed the BMP. Little by little, we push them out of here,” says Oleksandr.

But the Russians also hunt Ukrainian military equipment. Due to the large number of Russian drones that help guide artillery fire, the crews of Ukrainian self-propelled guns have a very difficult task. Like the infantry, the Gvozdika howitzer is hidden under the trees. The Gvozdiki must move efficiently into firing position, shoot quickly and then look for cover again.

“The Russians use a lot of artillery, and above all a lot of unmanned aerial vehicles. We see and hear some of them, so you can get away in advance, hide or move. But some are not perceptible — admits Ivan, commander of the Gvozdika howitzer. “In spite of everything, we outwit them, we dodge them and drive to new redoubts, from where we strike the enemy.

Look at my darling

When we are heading for artillery positions, damaged Russian military equipment appears by the road from time to time. Like, for example, a tank standing on a dirt road with the letters “Z” painted on its armor. Or rather – what was once a tank. The hull is devoid of a turret, which, due to the explosion, flew somewhere far away.

“This is all the work of our boys,” says Ivan.

“Yes, that’s us,” confirms one of the self-propelled gun crew. “But we get it too. Look at my darling.

He points to an iron machine, the thick armor of which is covered with fragments; the tank was damaged as a result of shelling. 21-year-old Danyło, the commander of the knocked out gun, explains that it happened during an artillery duel. The shell fell a few meters from them, and the shrapnel did some damage.

“Our crew is still working on it, but the self-propelled gun can now be used,” says Danyło.

After Bucha I was torn from the inside

This time it occurred without losses. But earlier, while they were fighting in the Sumy region, one of their comrades died. First, he was wounded during shelling. The rest of the crew wanted to save him, but before they could get to him, more shells fell. The soldier could not be saved. The self-propelled gun also suffered serious damage then, but was quickly repaired.

“Losses do not demoralize us, they only add to our anger,” says Oleksandr, commander of the second self-propelled gun.

Oleksandr has a two-and-a-half-year-old son. He hasn’t seen him for a long time. Sometimes, when they go to nearby villages, he sees children there. Though war is near, seeing them makes him glad.

“When I saw what they did in Bucha, it was as if I was being torn from the inside. They have no mercy, nor will there be any for them. Knight’s honor has ceased to apply,” says Oleksandr.

On the basis of conversations with soldiers from his brigade, Ivan claims that most of them today have the same motivation: they are fighting to prevent the Russians from occupying new territories, to prevent them from reaching their families, their relatives and loved ones.

“The enemy has invaded our land and we must drive him away,” says Ivan.

The fate of Donbas is not a foregone conclusion. The Russians are attacking from different directions and trying to break the Ukrainian defense in many places, hoping to hit a weak point.

The war of maneuver continues.