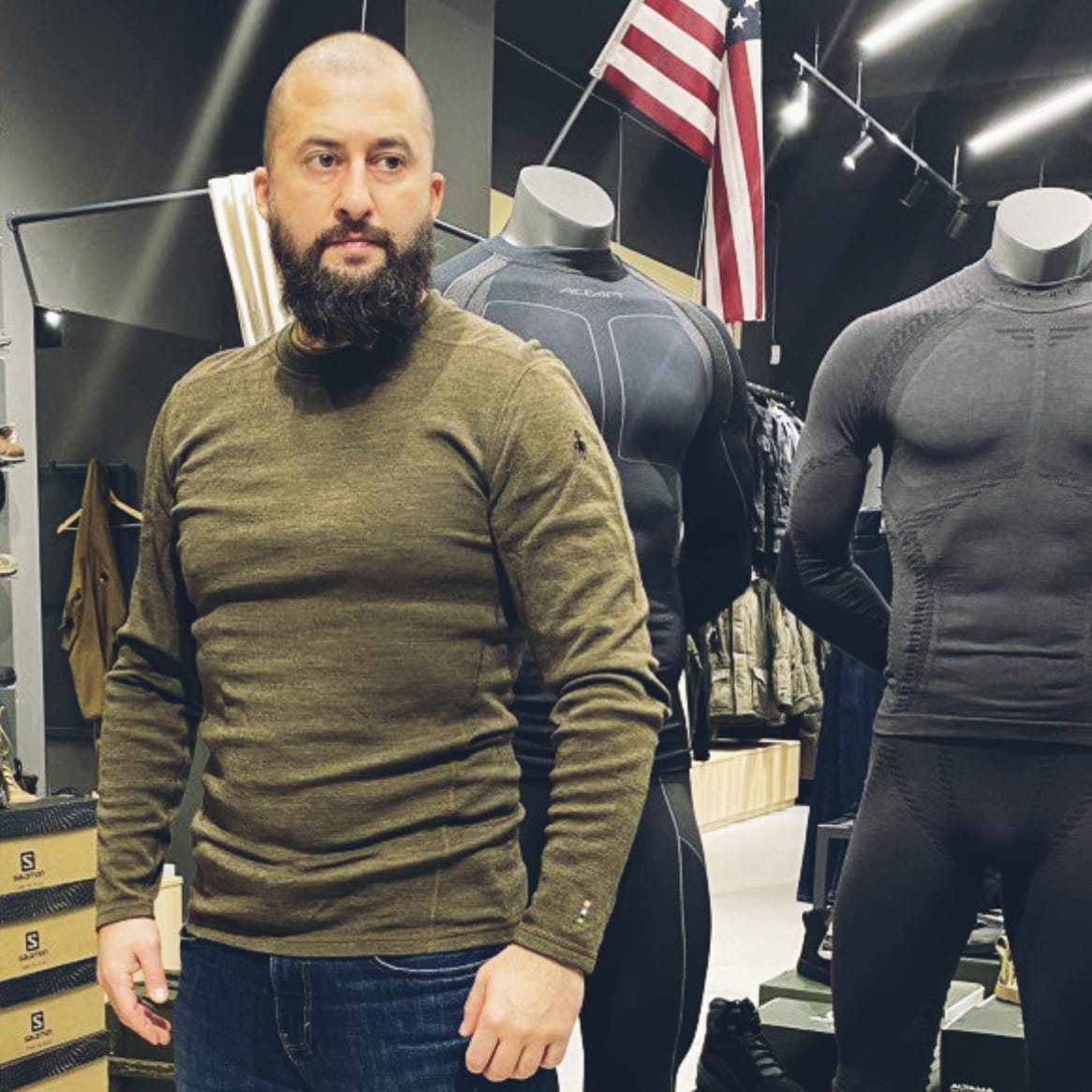 The capital’s military store has been under siege since the threat of another Russian attack began to loom over Ukraine.

It’s hard to squeeze between the hangers and shelves of the store in the late afternoon. Customers and curious people browse winter jackets (one was recently bought by the Minister of Defense, and earlier also by the Minister of the Interior), thermal underwear, shoes, helmets and food rations. They ask for bulletproof vests, ballistic plates and tactical first aid kits, but these disappear almost as soon as they arrive in the warehouse.

“The crowds are like those in a supermarket before Christmas,” jokes the 41-year-old Volodymyr Rudenko, co-owner of the Abrams military store in Kyiv. “Every national crisis is immediately felt in the store.”

The relatively small shop has been under siege of consumers since the threat of another invasion from Russia reached its zenith two weeks ago. Employees—some of them veterans of the war in Donbass—work with those interested in military equipment. Abrams is more of a luxury store because it houses the world’s leading brands that attract the more discerning customers. Rudenko says that in addition to the usual customers, high-ranking military who have been readying for war for eight years, a lot of civilians have now appeared. Some people literally equip themselves from head to toe.

“We can’t keep up with the orders. We import most of our items from abroad, mainly from the United States,” says Rudenko. “As much as we’d like to, we can’t speed this up.”

There are complications at every step—the falling price of the hryvnia against the dollar, logistical difficulties caused by the pandemic and problems at customs. As a result, delivery time has increased from two weeks to one and a half months.

Once only veterans, now also women. Who wants to buy a helmet today?

The store has been operating for over a decade. Rudenko and his business partner began to import equipment for airsoft, a team game where participants use replicas of weapons that shoot plastic pellets. Initially, people slapped their heads and asked Rudenko what people are supposed to do with these expensive helmets that no one was going to buy. Two years after the opening of Abrams, protests began in Kyiv’s Maidan. It would happen that one day the officers of the Berkut special militia unit, known for its brutality, would come to the store, and on the next day the protestors. They primarily bought woolen socks to endure the winter days and nights. Rudenko was afraid that the two groups would run into each other and fight in the store.

In 2014, a war broke out in eastern Ukraine between Ukrainian forces and pro-Russian separatists and Russia, as a result of which over 13,000 people died. At that time, groups of boys accompanied by sponsors (including deputies of the city council or parliament) would come to the store and buy everything they needed. Or alternately, the families of people who joined volunteer battalions would come to buy equipment for their relatives. Eight years ago, the Ukrainian army had virtually no equipment—there was a lack of uniforms, shoes and even food. Rarely was someone aware of what they really needed.

“Back then, nobody asked about the protection class. They just wanted a vest, a helmet and they ran off,” says Rudenko.

Over the years, however, customers have figured it out. The military people who come to the store no longer want just anything. They ask about specific brands, NATO-standard first aid kits, expiry dates on medicine. They show up regularly to re-equip themselves—replacing  torn gloves or lost ballistic glasses—not to buy everything for the first time.

There are also more women frequenting the store compared to previous years. They used to come mainly to buy a gift for a boyfriend, but now they want military clothes and equipment for their own use. That is why women’s items have begun to appear in Abrams. Sometimes couples come and stock up together.

In February, however, it was not soldiers, but civilians who started to buy everything out. Rudenko talks about over a hundred-liter military bags; they were selling poorly before, but when everyone started talking about “go bags” to pack essentials during conflict, they disappeared in a flash.

“I don’t always know if people know how to use the equipment they buy. Will they learn? I have no idea,” says Rudenko.

Another trend he has noticed among his customers is the need for neutral colors. He guesses, these are preparations for blending in during potential clashes in the cities, and for the enemy to have a more difficult time spotting targets.

We end the conversation when customers again filter into the store. I then set off for Kharkiv to see how the city, 40 km from the border where Russian troops have amassed, prepares for a possible confrontation.