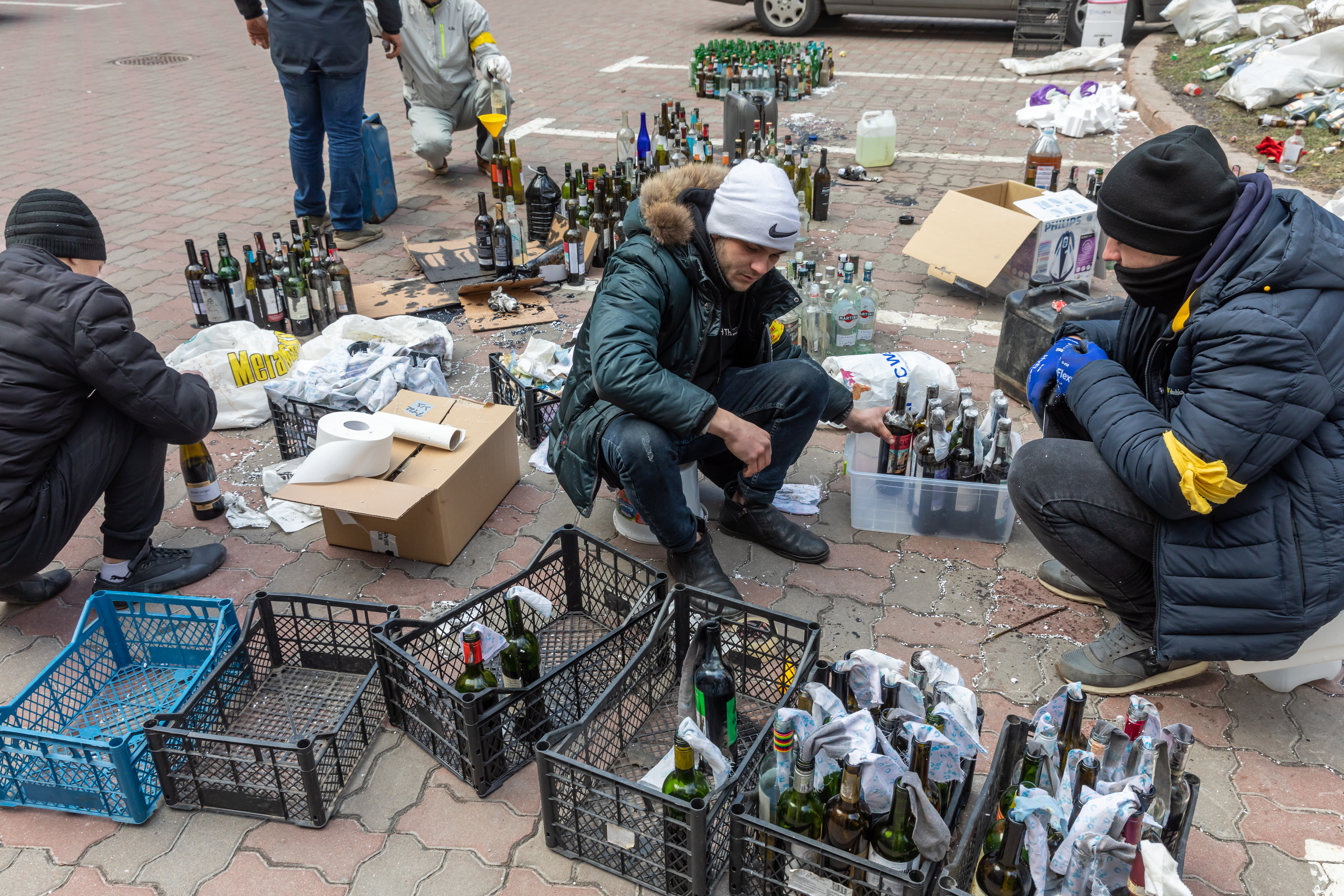 PAWEŁ PIENIĄŻEK FROM KYIV | The Ukrainian capital prepares for a Russian attack. Everyone helps to the best of their abilities. Some go fight, others take care of supplies, build barricades and fill bottles with gasoline.

Thirty-six-year-old sculptor Volodymyr Zurawel sits outside welding pieces of metal. In Kyiv, his monuments decorate the Kyiv-Zhuliany airport, Poshtova square, Muromets Park and other landmarks. Now he creates anti-tank hedgehogs that are planted all over the capital. The city has been littered with barricades in recent days. They are made of sandbags, concrete blocks, trucks and railroad cars. Hedgehogs stand in front of some of them too. Zurawel is capable of producing six to ten pieces a day. He would like to make five hundred to thwart the plans of the Russian troops.

“This is modern art,” jokes Zurawel. “They say hedgehogs successfully stop tanks. Like everyone, I’m attempting to make even a small contribution to stopping this insanity.”

In Kyiv and all over Ukraine, residents are organizing on their own and helping to the best of their abilities. Some stand at checkpoints, pick up weapons and go fight. Others organize the delivery of food and necessities for the civilian and military population, and support the defense of the city as it prepares for a potential attack from Russia.

Fire in a bottle

Passing through a door in a nearby building, I pass through a series of rooms crammed with Molotov cocktails— primitive incendiary bottle grenades filled with two-thirds gasoline and one-third engine oil. A strip of fabric that serves as a fuse is inserted into them. The Ministry of Defense of Ukraine regularly sends instructions via Twitter  on where to throw Molotov cocktails. In the case of a tank, the most vulnerable places are the air vents and optics. “Destroy! Burn! Cast the enemy out of your home, your country!” — wrote the Ministry of Defense of Ukraine.

Thirty-year-old Tetiana Lozowa sits amidst gasoline vapors, boxes full of explosive cocktails, and cuts fabric into fuses. She was born in Khabarovsk in southeastern Russia, but moved to Ukraine with her mother at the age of 12. They were running from Tetiana’s father, who abused them. She is a physiotherapist under normal circumstances but now she does other things — she delivers medicine to the hospital, finds accommodation in other oblasts for people leaving Kyiv, and prepares Molotov cocktails. She feels tied to Ukraine.

“I can’t just sit at home, can’t eat, sleep, or think about anything else. On Friday, my friends, volunteers, died near Kyiv. Who can do nothing after something like that?” — she asks rhetorically.