Kyiv: concert for closing the skies 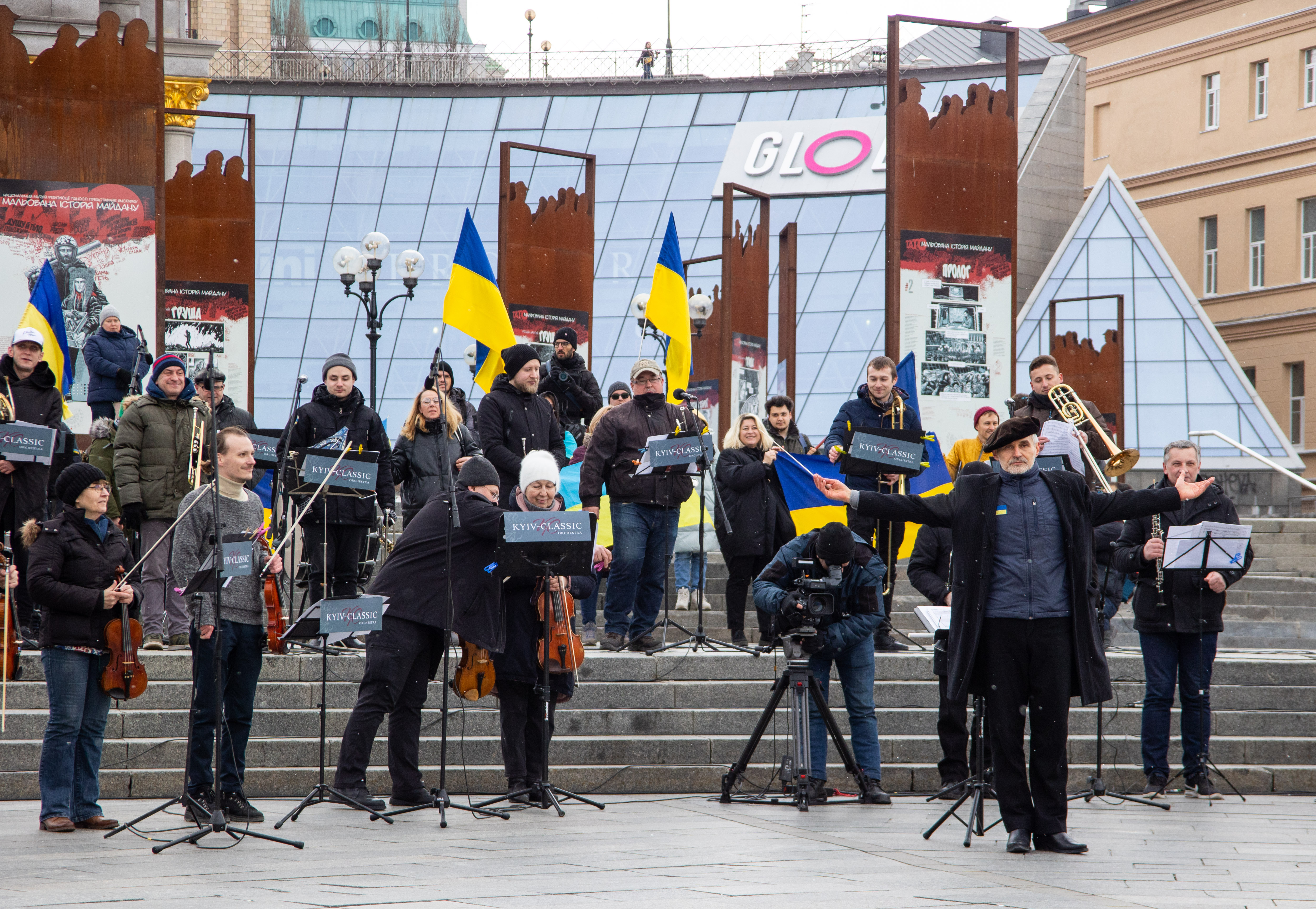 Kyiv: concert for closing the skies

The authorities, led by President Volodymyr Zelenskyy, are constantly appealing to NATO countries to introduce a no-fly zone over Ukraine.

The Kyiv-Classic Symphony Orchestra started its concert at Independence Square in Kyiv with the national anthem of Ukraine. There were up to seventy performers in the orchestra until the outbreak of war but about a third played that day. Conductor Herman Makarenko explained that those absent were either serving in the regular army and territorial defense, or had to evacuate their families to a safe place. The concert was a call to close the skies over Ukraine. It is in the air that Russia has the greatest advantage.

The authorities, led by President Volodymyr Zelenskyy, are constantly appealing to NATO countries to introduce a no-fly zone over Ukraine. It is symbolic that the concert began shortly after the sirens wailed in Kyiv to warn of a possible air raid or missile attack and that the Ukrainian air defenses tried to shoot down targets flying over the city.

Olena, 64, was among the few people still in Kyiv who dared to come to the central square of the city. She lives close by and when she saw on TV that there was going to be a concert, she decided not to miss the opportunity.

“My family didn’t want to let me leave the house because of the sirens, but I said I’d go anyway. It’s such a soulful outburst that it’s hard to imagine,” said Olena, tears filling the corners of her eyes. “Apart from bringing thermoses to the boys from the territorial defense and supporting them, there is nothing else I can do. So I wanted to come here to show my support.”

In addition to the Ukrainian anthem, the orchestra played excerpts from well-known Ukrainian works, as well as Beethoven’s 9th Symphony.

Olena would very much like the concert’s message to reach the world. Although she doesn’t doubt that Ukraine will win the war, the number of casualties will depend on the decision regarding a no-fly zone. It is the bombs dropped from Russian planes that are wreaking havoc. Soon after the concert ended, Russian bombs devastated a maternity hospital in besieged Mariupol, in the eastern part of the country. At least 17 people were injured, including staff and women who were about to give birth. The Russians also dropped a bomb on Zhytomyr in central Ukraine that evening. It destroyed a house and injured at least one person, while the rest were in shelters.

Olena lives near the metro but does not spend her nights there. She did that the first night, froze and caught a cold. She decided that she and her family would stay in her apartment, only they would sleep in the hall so that the load-bearing wall would protect them.

“There are constant alarms at night, the sirens roar. If they closed the skies, people would be calmer,” she says.

She cannot understand why Vladimir Putin launched the attack on Ukraine on February 24. She doesn’t know what they are guilty of. After all, they didn’t do anything wrong. They just want to live as they please.

“I believe that our country will flourish and that everything will be fine, but I do not know what price we will pay for it,” she said.

As we finish talking, the sirens again howl loudly. Olena winces slightly and starts walking in the direction of home.