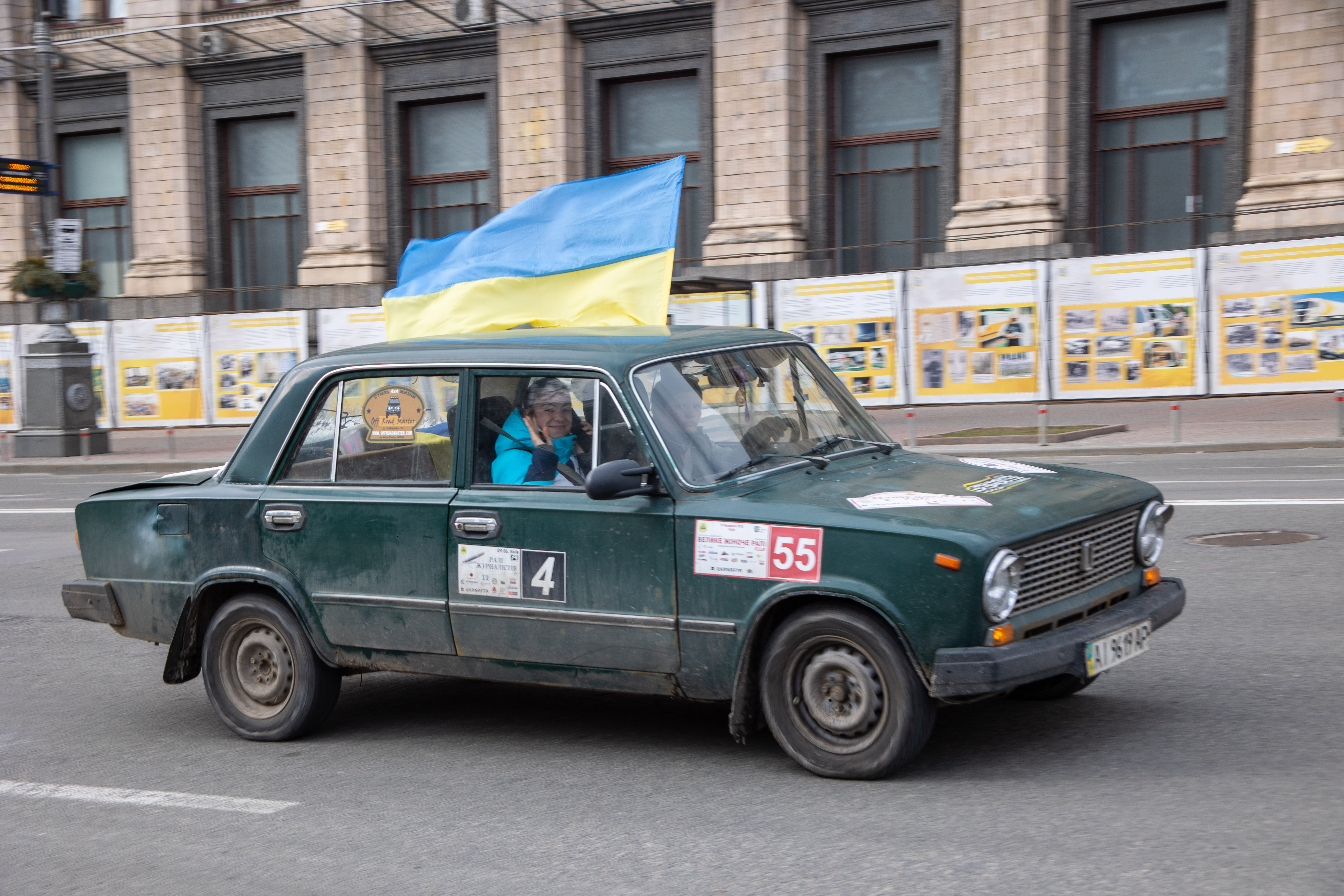 After weeks of uncertainty, the inhabitants of the Ukrainian capital are slowly coming out onto the streets. They are seeking the life that the Russian offensive tried to destroy.

The 31st of March. One of the first warm days in Kyiv this year. For more than a month, the threat of a Russian attack has been hanging over the 3-million-strong capital of Ukraine. But the situation around the city has calmed down a bit in recent days. The Russian offensive seems to have lost momentum.

More people and cars have appeared on the streets of Kyiv. In a square in the neighborhood of Podil, a man does pull-ups on the bar of an outdoor gym, and children play in the playground. Natalia, 60, and Larysa, 55, sit quietly on one of the benches. This sight was unthinkable in the first days of the invasion, when the entire city froze.

“This fills my soul with delight. There are people around, even children playing,” says Natalia. “You can already feel Spring, so I have hope that it will only get better.”

The first days of chaos

Things are calmer, but not completely calm. In the evening and during the night of March 30-31, artillery boomed almost without pause. The battles have not ceased, they have just moved away from the capital. That is why Larysa, after a month in the countryside of Vinnytsia oblast, returned to her home in Kyiv. However, on the night of March 30-31 she woke up regularly because the sounds of the clashes were so loud.

Natalia did not leave Kyiv even for a moment. For the first few days she lived in a metro station. She took two bags, a folding stool, and a mattress to sleep on. Although the situation was extremely chaotic in the first days of the Russian attack, Natalia went outside from time to time. She couldn’t stand it in there. She returned home because the chill of the shelter bothered her.

“The siren started to howl, I prayed silently and told myself that I’d make it. There was nobody around. Sometimes I saw someone from a distance, there were no cars,” she recalls.

Since then, traffic has increased in the streets, although of course this cannot be compared to the situation before February 24.

Nighttime is the worst

Natalia has gotten used to the fact that evenings and nights are the hardest, so she doesn’t go to bed until two in the morning to wait it out. She sits with her phone and reads the news until she falls asleep from exhaustion. Then she usually wakes up in the morning when the artillery starts pounding again. During the day, she can’t doze off.

“I also sleep four hours at a time,” says Larysa. “Somehow, I don’t want to sleep for longer.”

The relative calm in Kyiv coincided with reports that the Ukrainian army is gradually regaining control in the north-western suburbs of the capital and assurances by the Russians that they are limiting the offensive towards Kyiv and Chernihiv.

It’s good to get back to work

More and more restaurants and cafes are also opening up in Kyiv. Some of them are serving non-alcoholic Prosecco and alcoholic drinks from under the counter (although prohibition was in force until March 31). Patrons  can even play chess or table tennis. Some of them only concern themselves with business, but others operate to support aid work.

“We only make enough from customer orders to pay the rent,” says 29-year-old Oleh.

He is the chef at the popular cafe Charms, open for over a week. Every day, Oleh and the rest of the team prepare several hundred meals for soldiers and members of the National Guard. When I visited Charms, they were packing chicken wings, potatoes and pickles for soldiers.

“The wings were given to us by KFC, the potatoes and barrel of pickles were brought to us by volunteers,” says Oleh. “People bring whatever they have.”

He orders everything through chats in one of the messengers. Users announce what they need or what they have to donate. Everything is free.

Currently, there are only a few items on the menu for cafe guests to choose from, such as syrniki (pancakes) from farmer’s cheese and chicken meatballs. Oleh announced that avocado toast would also be available the following day. Although it is difficult to find vegetables and fruits — which he complains about — for some reason there are crates full of avocados in many stores.

In the first weeks, Oleh served in the territorial defense, but there were already too many people in this military formation so he was soon sent home. He decided that he would come in handy in a different way and would do what he did best — he would cook. He was hungry for work. How long can you sit at home?

A bit of peace

He is followed by 28-year-old Kyrylo, co-owner of the Homie barber shop in the center of Kyiv.

“I don’t know if it can be compared, but the situation reminds me of the first weeks of covid. First, panic, not understanding what was happening, denial, and then everything started working within the new reality,” he says. “People know there might be an offensive or something will fly in, but they prefer to act. It’s easier than just sitting at home and reading the news.”

Homie opened a little earlier than Charms. There were eight barbers before, six of them left and two remain. Hairdressing services are in high demand and the staff of Homie are booked several days ahead. Normally they charge 600 Hryvnia for a haircut (around $20), but now everyone pays what they can. Some give nothing, others pay a share, the full rate or higher. Lots of customers come in uniform.

“They defend our country and are happy that they can feel as if in everyday life. They sit down in the chair and have their hair cut,” says Kyrylo.

He is happy because he feels that he is doing something useful and recalls what life was like in peacetime.