“I will lay down in front of a tank, I won’t let it pass.” Correspondence from Ukraine 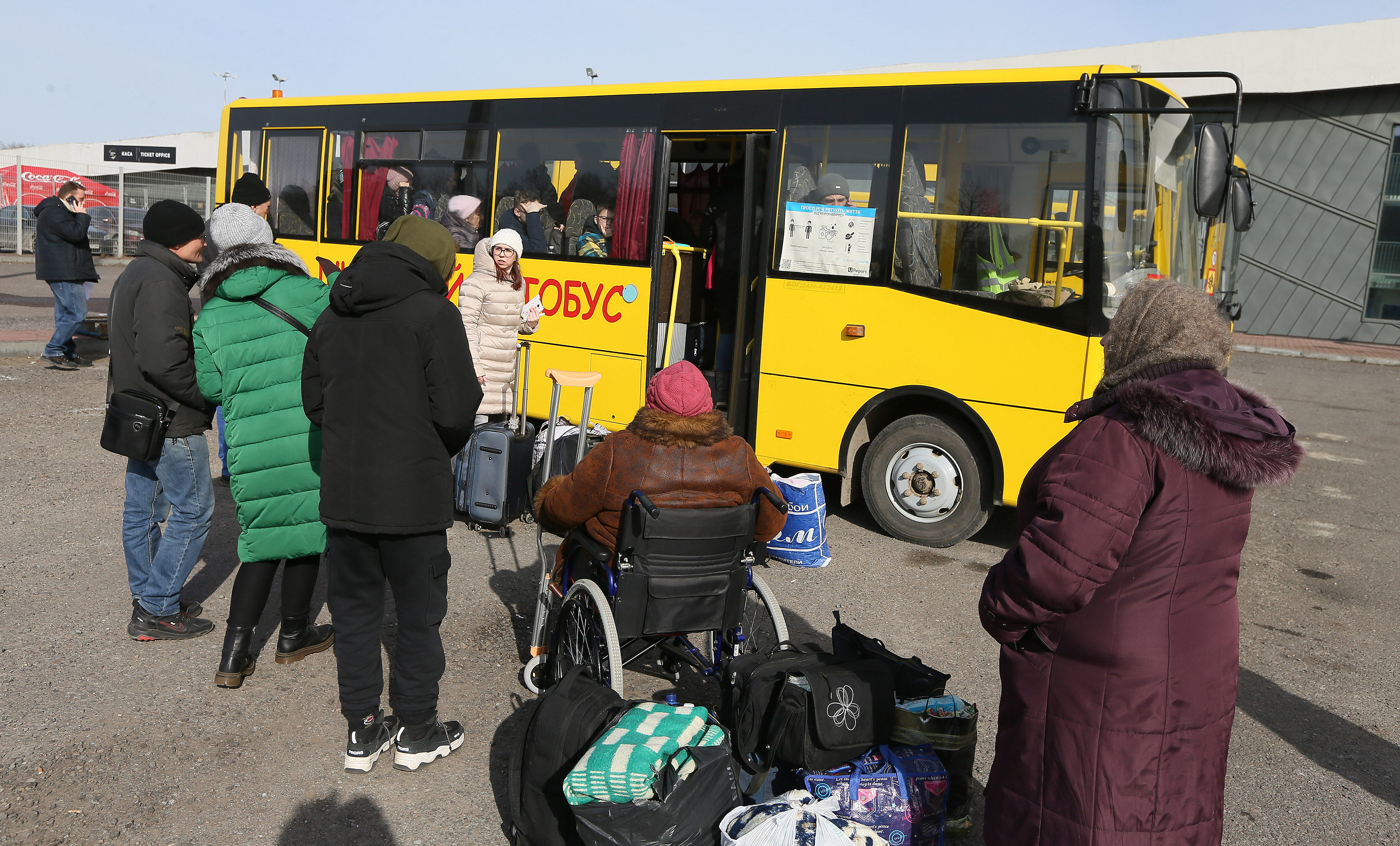 “I will lay down in front of a tank, I won’t let it pass.” Correspondence from Ukraine

As a result of the Russian invasion, more localities in Ukraine are under fire, and the number of civilian casualties is growing rapidly.

Around 4 PM, something made an awful bang. Sixty-one-year-old Anatoly and his wife Svitlana leapt to their feet. The electricity went off immediately. Anatoly went outside and saw that the wall of his house was pockmarked by shrapnel;so was the car. There was no need to carry out a long inspection to find out that the car was now only good for scrap. Branches lay on the ground. The shell had crashed against a walnut tree.

Their neighbor Ihor was lucky—the payload narrowly missed directly hitting the front of his house. But the men don’t think about leaving. Anatoly has been living in Kalynivka since birth and is not going to change that.

A few hours later rumbling was again heard in the village. This time the rocket exploded into pieces in the air and damaged several houses near Anatoly’s property. One of them had a hole in the roof that was about a meter in diameter. Pieces of shrapnel lacerated an older woman who was getting ready, along with her husband, to go down to the basement. She lost a lot of blood, but they managed to get her to a hospital. A day later, doctors still hadn’t been able to get all of the pieces of metal out of her.

After Anatoly, Svitalana, Ihor and I conversed for a few minutes, we heard Grad missile system batteries firing. It was the Ukrainian artillery, but a response could come soon. Anatoly, Svitlana and Ihor hurry to their cellars to hide.

The chairman on alert

Forty-six-year-old Vadim Bulkot can talk about luck. Shrapnel destroyed his fence, got lodged in a wall of his house, smashed a window and flew into his wife’s office. Bulkot had taken her and their son to western Ukraine, so the room was empty.

“These are residential buildings, there are no military facilities here,” he says.

After the shelling, the authorities of the Kalynivka hromada (the equivalent of a municipality) of the Brovary raion recommended that the remaining inhabitants of all six towns should leave as soon as possible. Kalynivka itself is a village inhabited by almost 4,000 people and located 24 kilometers north-east of central Kyiv. Virtually all of the municipal staff left the village and only one deputy and chairman of the entire hromada, Bulkot, remained. Why doesn’t he leave?

“And who would I be if I left these people?” He answers the question with a question.

Bulkot tries to look after everyone like he did until the outbreak of the war. It’s a small place, so everyone knows each other. The only thing that has changed is that Bulkot is wearing a bulletproof vest under his jacket.

Kalynivka in the line of fire

Until now, people left Kalynivka on their own, but after the shelling of several towns belonging to the Kalynivka hromada, this process gained momentum. In addition, the Ukrainian army destroyed a column of Russian tanks nearby. From there, the Russians hurried to take up further positions near Kyiv. Ever since the Kremlin launched its invasion of Ukraine, capturing the capital has remained one of the offensive’s key goals. Thus Russian troops incrementally approach Kalynivka and the surrounding towns.

On March 10, the hromada authorities organized buses to transport women, children and the elderly to the station in Brovary. From there, they could go to Kyiv and look for transport to safer parts of Ukraine.

“The situation is getting worse, we are in the line of fire,” says Bulkot. “When it calms down, they can come home right away.”

The first bus left at ten. There were only seven people on board. Demand for the two o’clock bus was much higher. Women of all ages and children with meager luggage took their places. Soon there were no more seats, and another vehicle arrived for passengers.

“Take care! Write!” A woman says through tears, likely to her mother.

“Okay,” the other replies softly.

Bulkot is teary-eyed. He turns away from me and the bus.

I know when it is our side pounding

A group of people, including two children, is standing by a filling vehicle. They’ve spent most of their time in a basement lately. It is cramped, with pipes taking up the majority of the space. But it is warm, there is electricity, and they’ve brought water there. Among those watching the evacuation is 68-year-old Liudmila Bondareva.

“Yesterday was terrible. It thundered, rockets flew over us, plaster was raining down,” she says.

Her voice breaks and tears run down her cheeks. Bondareva points to a mother holding a baby in her arms.

“An infant lives with us. The child turned five months old on March first. How can we take this?” she asks rhetorically and weeps.

Bondareva curses Presidents Vladimir Putin and Alexander Lukashenko, and ordinary Russians. She apologizes for her emotions, which she is unable to contain. She cannot forgive them for raising their hands against her Kalynivka and the country. Meanwhile the sound of artillery reverberates.

“I know when our side is pounding. When something is flying this way, whistling, it’s a completely different sound.” I don’t hide in the basement then.

She leads me to her home. She walks through a small kitchen and a narrow corridor to show me her room. She brags about her parrot and jokes that it is her partisan. She shows me religious icons that she has been embroidering for seven years — she has covered practically all the free space on the walls with them. She had all of them blessed at the local church.

Bondareva has been a soloist in the local folk choir for three decades.

“Oh where haven’t we been! We have traveled to Estonia, Latvia, Murmansk, all of Belarus,” says Bondareva.

She shows me a picture with the group. There are at least thirty women dressed in colorful national costumes. According to Bondareva, a significant part of the choir left. However, she does not intend to leave Kalynivka, because she was born here.

“I’ll take the icon, lie down in front of a tank, I won’t let it pass. This is my land and native village. I love it,” says Bondareva.

Soon after we leave her home, two buses under police escort leave toward the town of Brovary, some three-and-a-half kilometers from the village. Evacuees will safely depart for Kyiv from there.

Waiting for the wounded

Forty-three-year-old Serhiy left the village of Zalissya (approximately 7 km north of Kalynivka) with his wife, 14-year-old daughter and 4-year-old son using independently organized transport. The town was taken over by the Russians, who entrenched themselves there. Serhiy and his wife decided that they should go to a quieter place.

They set off in the car towards Kyiv, with Russian positions to their rear. They heard a shot, possibly in the air. Serhiy slowed down slightly, but after a moment stepped on the gas, wanting to leave as quickly as possible. The Russian soldiers then started shooting at their car. Bullets pierced the body of the car. They then must have struck with something stronger because there was a whoosh of shrapnel. Serhiy and his family drove to the hospital in Browary on flat tires.

On a hospital bench, Serhiy sat with a bandage on his head and his arm wrapped so that it looked like a white and red mace. Two of his fingers were torn off during the attack. His daughter was badly wounded and has a broken bone in her arm. The wife and son emerged without a scratch. Though the four-year-old still looked traumatized by what had happened.

Eighteen injured civilians, mostly with bullet or shrapnel wounds, had been brought to the hospital in Browary in just two days. Some with shattered bones and limbs for amputation. Six people died.

As of February 24, the UN has been able to determine that at least 549 civilians have been killed and 957 injured. Most likely, however, the numbers are much higher. Doctors, although exhausted, have no doubts that the really hard work still lies ahead.