Donbas: I’m leaving because I want to live 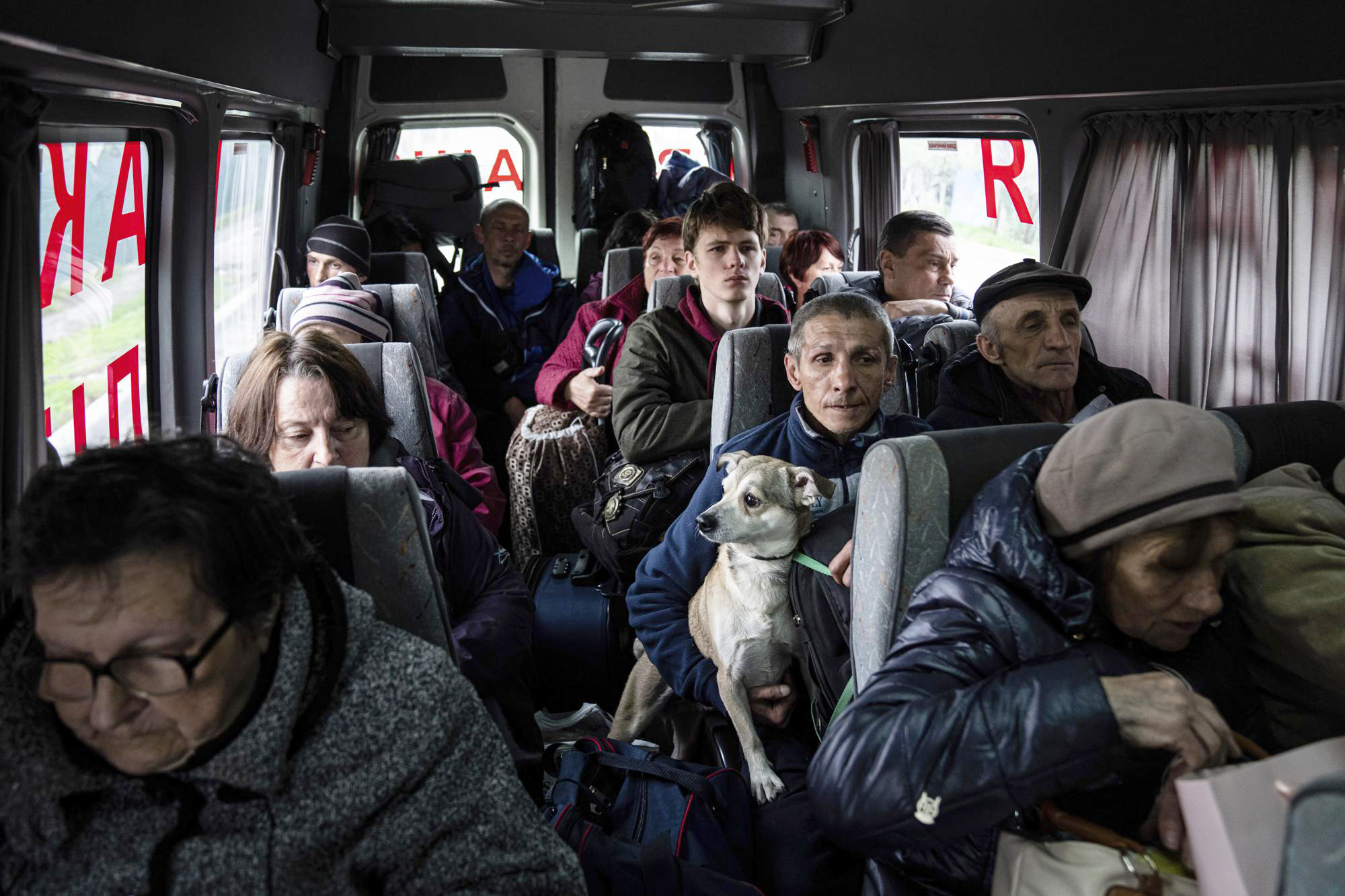 Donbas: I’m leaving because I want to live

Lyman has become another city that the war has reached. Some residents are deciding to leave at the last minute.

There are thirteen people standing by the corrugated steel supermarket hall. All of them have decided on the first day of May to leave Lyman, population 22,000, in Donetsk Oblast. On the road near the store lay branches cut by shrapnel. Two shots are heard, one whistle merging with the other, and successive blasts. Loud enough to feel as if they were tearing you from the inside. They must have fallen somewhere close. Some people throw themselves to the ground.

“Why did you fall?” An elderly man asks, laughing.

He only bent down slightly. He was leaning against the thin wall of the supermarket, pretending nothing had happened, but his face was unconvincing.

“You have already lived out your life, sir, but we want to live a little longer,” says another man, lying on the ground.

He looks younger by two or three decades.

“We hope they will get us out of here today,” he adds.

He hardly finished these words when the sequence is known again: shot, whistle, blast. This time louder, thus closer. These thirteen hope that an evacuation bus will come for them and take them out of this city, into which the war has crept suddenly. The Russian army is attacking from the east and trying to surround Lyman, where up to 10,000 residents still remain.

With each shell falling closer, more people fall to the ground. However, not everyone can. An older woman is standing on crutches, fear painted on her face.

“They’re shooting civilians. What are we suffering for? Tell me. I haven’t come out of the basement in a week. I’m shaking,” she says, and begins to cry in the process.

Despite the calls from the authorities to leave Lyman as soon as possible, many people did not want to hear it. They did not believe that their city could become a target. On the day when the thirteen decided to leave, the most intense shelling of Lyman since 2014 took place.

When the artillery duels finally fade, police collect people from the city. A minibus with police officers speeds through the dense forest. A dozen or so meters from the supermarket there is a shell crater and dirt is scattered around. Frightened people board the bus.

“Quickly, while they’re not firing,” one of the policemen urges people.

Finally, the bus departs to a safe location a few kilometers away. Only police commander Ihor Uhnivenko remains. At the supermarket wall, he waits for his subordinates with whom he is to travel into the city to pick up the wounded. Every now and then a shell whistles over the store. Uhnivenko admits that this is the worst day.

Other policemen go to places near Lyman, where the fighting is even more fierce. They transport those who remain, mostly the elderly and the wounded.

The next day, a Russian rocket fell on the bridge connecting Lyman with the rest of the Donetsk oblast. You can leave the city and the surrounding villages only through an old and damaged river crossing, which is also under threat of attack by the Russian army. Heavy fighting for Lyman is taking place and the advancing troops are trying to cut Ukrainian soldiers off from the hinterland.

Only on the third day of regular shelling, and after leaving the city became almost impossible, have more people decided to leave Lyman. The policemen arrived with a bus and minibuses accompanied by an ambulance. About fifty people were waiting outside of the supermarket, accompanied by sporadic booms of artillery.

According to the data of the regional authorities, at least nine people died and seven were injured in Lyman and nearby towns during those three days. According to Uhnivenka, as of February 24, no less than 20 people have died in the city. According to data from the governor of the Donetsk oblast, Pavel Kyrylenko, at least 345 people have been killed and 1,019 injured in the region since February 24, when Russia launched its full-scale invasion. These estimates do not include the victims in Volnovakha and Mariupol, as it is currently impossible to determine their exact number.

Just on the other side of the river in Rajhorodok, the evacuees could catch their breath, although emotions still prevailed. You could still hear artillery, but now only in the distance. Seventy-year-old Volodymyr has only bags and a dachshund, Nika, which his granddaughter left him.

“I stayed alone in the apartment with the dog, the whole family left,” he says. “I wanted to wait it out until the end, but I did not know that they would be shooting like that. We ran down into the basement as soon as they started pounding.

Volodymyr stops himself from crying.

“We were waiting for the bus and — sorry for the word — they were right fucking overhead. Whistling, then an explosion. My nerves couldn’t stand it. I don’t want anything else but to be where they aren’t shooting. I want to survive.”

He knows that he is going to Dnipro in the neighboring Dnipropetrovsk Oblast, but beyond that he does not know what to do.

You always want to come back home

Also among those waiting is the seventy-two-year-old Kateryna, who left Lyman with her daughter. Until the very end, she did not believe that the war could reach the city.

“I was born in such a time that I knew war only from history, but it got us,” says Kateryna.

“Has history come home?” I ask her.

Kateryna is going to visit her grandson in Rivne, western Ukraine. The last time she was there was in the 80’s; she doesn’t know what to expect. However, she is sure that it will not be as beautiful as it is in her town.

“We live among forests. There were times when people from Donetsk came to us and would only drive in before they were almost jumping out of the car window because they wanted to breathe our fresh air,” says Kateryna.

Today the beautiful forests full of animals, mushrooms and neighboring tourist resorts are shrouded in fire and smoke that spreads through the surrounding towns. Falling shells and rockets set off fires, so the beauty of Lyman may soon be lost for years. As the head of the Donetsk Regional Department of Forestry and Hunting, Viktor Storozhenko, told Free Radio, 3,700 hectares, or as much as 20 percent of the forests of Lyman, were on fire.

“We can only hope that it all ends well.” I think that God will get us out of it, even by having to pull us by our ears,” says Kateryna.

Though she has just left, she can’t wait to get back to her apartment.

“It is said that the walls of a home heal, while the foreign remains foreign. That’s why you always want to come back. You worked for it. In addition, I am of such an age that I cannot imagine any other home,” she admits.

She adds: the most important thing is to survive, and then we’ll see.