We Will Be Lucky if Biden Actually Becomes the President-Elect 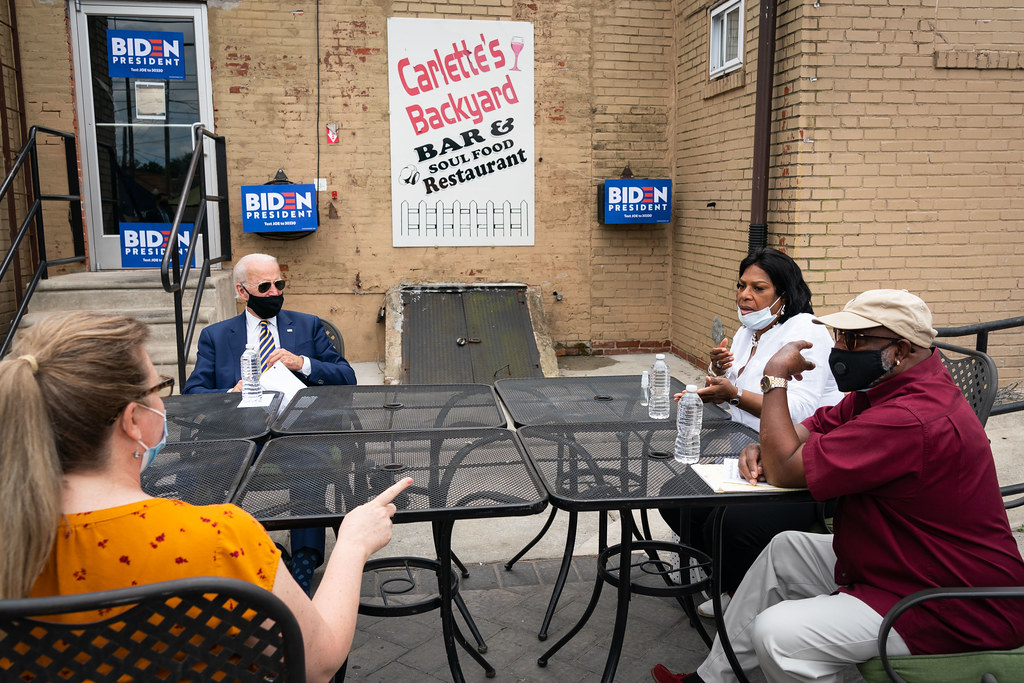 We Will Be Lucky if Biden Actually Becomes the President-Elect

But this election is not over, and even the best case scenario is pretty dismal I have never thought this would be easy. I always knew that this was not a normal election, and that it would be deeply contentious during and after “Election Day.”

The day before Election Day, i.e., two days ago, I published a piece articulating what I have been saying for some time to friends, colleagues, students, my dog, and anyone who would listen: “Trump Will Pose as the Defender of Democracy Against a ‘Democrat Coup,’ and We Must Be Prepared.” I was hardly alone in noting that the election would be close; that Trump and the Republican National Committee had long ago started laying the foundation for the claim that “the radical left is making plans to overthrow the election” and “the Democrat party” is planning a “coup;” and that Trump would use every legal, rhetorical, and political means at his disposal to hold onto power.

I watched as some of my friends, smart people with more political savvy than I, predicted a Biden/Democratic landslide, at least in the popular vote, and a clear Electoral College victory even if it was close. I understand why. All of the polls suggested as much, and most pundits agreed. In addition, there is a hopefulness about “reason” to which I surely relate.  To put this in the form of a question: “after the last four years, and after 250,000 COVID-19 deaths, how the fuck could that many people actually vote for this guy again?” And there was also simply the psychological need for a kind of optimism: for the need to believe in a light, a bright light and not a glimmer, at the end of this awful tunnel.

For around fifteen minutes yesterday, I allowed myself to go there. I thought to myself “what if I’ve been wrong all along, and what if my seminar on ‘Democracy on the Ballot’ turns out to flop, and this is simply a straightforward election with no contention and street politics and danger?” It was a scary thought, especially since my syllabus is open for the next four weeks, during which I’ve been planning to share current material on the unfolding crisis. What if there is no crisis? An academically disturbing thought. But also a heartening one.

It lasted around fifteen minutes.

For it was pretty clear that this election was very close; that there was no “blue wave” in the Senate and House races; and that if Biden were to win it would be by razor-thin margins, enabled by late-reported mail ballots that Trump and his team would denounce and contest.

And then of course Trump did exactly what Axios reported he would do days ago, which he denied, though his denial was an obvious lie: he started tweeting that he had won, and that Democrats were trying to steal the election, and then went on TV, late, to more publicly declare his victory. Exactly as expected.

My savvy friends and many pundits, including the Lincoln Project guys, are still predicting that Biden will pull out a narrow Electoral College victory, perhaps even without the need to win Pennsylvania. May they be right.

Of course, even if they are right, everything that a great many serious political analysts have been saying remains true: it is very possible for the “right” results to be contested, over time and in many ways, so that Trump fights hard to retain power and perhaps succeeds. “The vote count” is all about which votes and who counts.

As Barton Gellman observed in “The Election That Could Break America,” there are many points of vulnerability during the “interregnum” between now and Inauguration Day on January 20, 2021. Gellman’s key point is that the complexities and ambiguities of the arcane and archaic U.S. electoral system will furnish Trump with real legal advantages:

. . . The worst case . . . is not that Trump rejects the election outcome. The worst case is that he uses his power to prevent a decisive outcome against him. If Trump sheds all restraint, and if his Republican allies play the parts he assigns them, he could obstruct the emergence of a legally unambiguous victory for Biden in the Electoral College and then in Congress. He could prevent the formation of consensus about whether there is any outcome at all. He could seize on that uncertainty to hold on to power.

A version of this is the situation we now face. It is possible that things might be resolved relatively soon—though anyone who counts out the possibility of ongoing Trump power-grabbing is a fool.

But it is clear that this scenario—only a few days ago considered a “worst case” scenario—is now a best case scenario. If we all do what is necessary and effective to make every vote count, and if we are lucky, then eventually a Biden election and Electoral College victory will be validated, on December 14 in the College and on January 6 in Congress. If we are lucky.

But the election results thus far must cause us to consider that there is a scenario worse than the scenario where Biden wins, Trump refuses to accept the outcome, and then eventually is forced to relent.

It is that Trump wins.

But there is another way he can win: by actually getting more votes, when the votes are counted, in Pennsylvania, or Arizona, or Georgia, or even Michigan. This is not impossible, just as it is not impossible for Trump to claim this regardless of whether it is true.

As I am writing this, Biden has received around 70 million votes and Trump 67 million votes—roughly the margin in 2016. This is not the kind of popular vote margin that most Democrats were expecting. And it is too early for me to stop worrying.

I retain hope that Biden can pull it out. Democratic strategists and MSNBC sympathizers are now saying that the Biden campaign never expected to win Florida or North Carolina or even Georgia, and that the Biden strategy always centered on recapturing the upper Midwest “blue wall” that Clinton lost by a few thousand votes in 2016. Having paid careful attention to the campaign, I do not think these claims are entirely sincere (but when are campaign spokespersons sincere?). At the very least, there was great hopefulness about Democratic presidential and even Senate victories in Southern “swing states.” But it is surely true that the most realistic expectation of the campaign was winning the “blue wall.” And this looks like it is happening and might even politically prevail. Might.

And so if we are lucky, eventually Biden will be declared the President elect. And the very worst case scenario—a Trump victory—will not come to pass.

But let’s be honest about two things.

One is that this best case scenario is hardly guaranteed, and much legal and political work will be necessary to make it happen.

The other is that this scenario is still pretty bad.

For there was no “blue wave” analogous to 2018 in Congressional elections. And it seems likely that the Democrats will not regain the Senate.

More importantly: whether or not Trump winds up actually “winning,” Trumpism is alive and well.

It has been validated by the Senate victories of Mitch McConnell, Lindsey Graham, Cindy Hyde-Smith, Joni Ernst, and especially the malevolent Tom Cotton. And it has been validated by the fact that over 67 million people voted for Trump. This is four million more votes than Trump received in 2016. Almost seventy million people voted for a racist, xenophobic death cult in the year in which over 250,000 fellow citizens died of a pandemic that Trump lied about, in which the economy tanked and public education was disrupted, and many millions of lives have been placed in serious jeopardy. When given the choice between the man who said he wanted to preserve and expand the centrist Affordable Care Act and the man who said he wanted to kill the Act with no alternative, they chose the guy who wanted to destroy their health security. When given the choice between a Democratic platform that spoke about repairing democracy and outlined a substantial policy agenda, and a Republican non-platform that simply stated “we support Donald Trump’s vision of American Greatness,” they chose the latter. When given the choice between a ticket and a party that represented a broad vision of a multiracial democracy, and a ticket and party that celebrated police brutality and Confederate symbols and the Proud Boys and QAnon, they chose the racist party.

Yes, Trump rose to power by cultivating some pretty toxic soil. And he has further poisoned it, and cultivated some really noxious and even deadly weeds on it.

Our best-case scenario is one where there likely remains divided government and Republican legislative and judicial obstructionism and a continuing reservoir of racism and resentment that can easily power Republican gains in 2022 and 2024.

American public life has been proven profoundly poisoned, in a truly sick version of “asymmetrical polarization.”

All of these things remain before us, public policy challenges that will lack a strong and organized public to address them.

The hopes for a “New New Deal” seem very dim.

We will be lucky to escape without another four years of “The Art of the Deal,” i.e., malevolent bullshit.

That would be nice.

But no one who cares about democracy can take heart from the place in which we now find ourselves.

Is there a light at the end of this very dark tunnel?