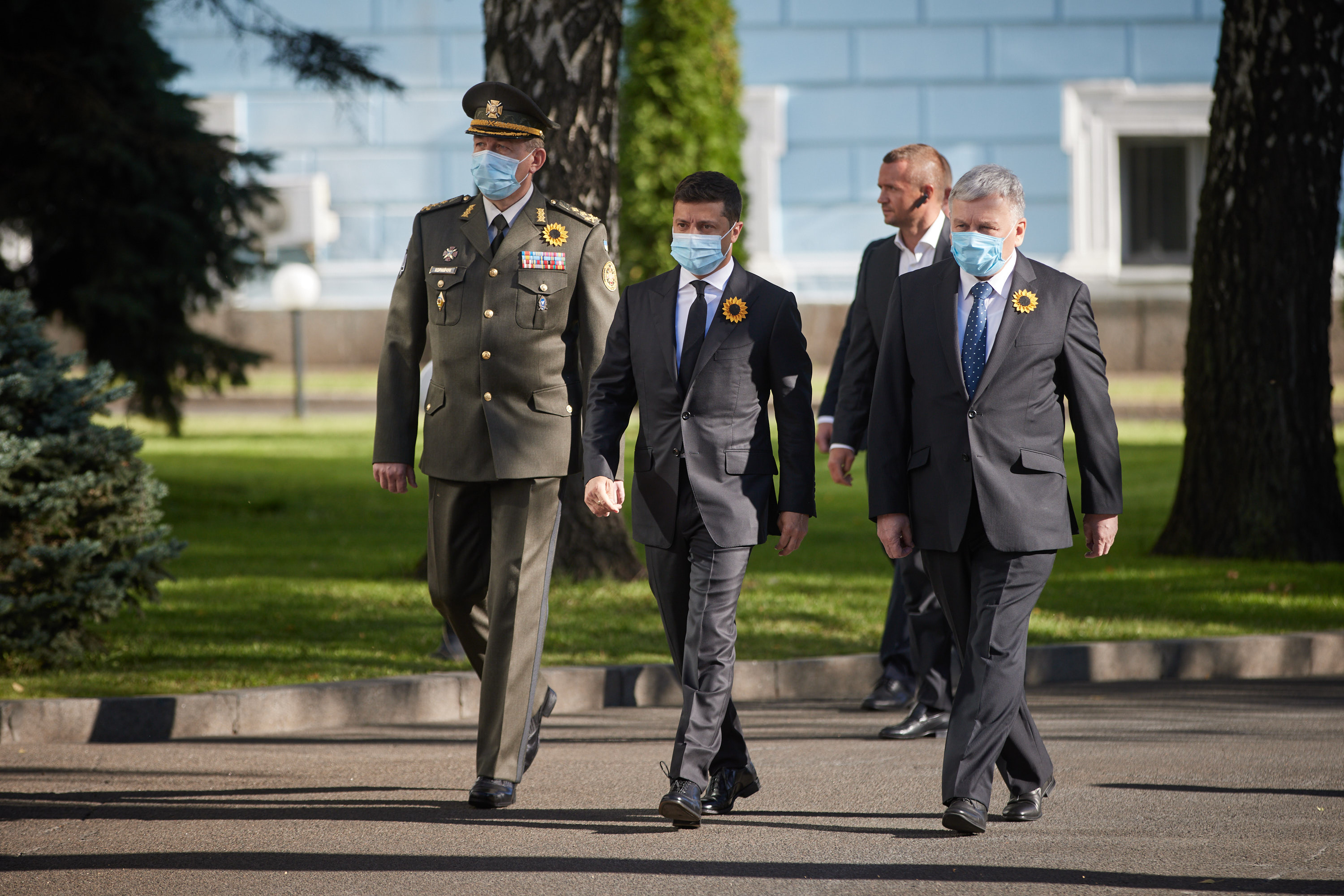 Volodymyr Zelenskyy is a 44-year-old man who until a few years ago was a professional actor and comedian.

In 2019 he was catapulted to the Presidency of Ukraine, in an election in which he stood against corruption and ran as the leader of a party, “Servant of the People,” named after the television series in which he had starred.

An unlikely politician, and an even less likely statesman, he is now a hero, for Ukrainians and for all citizens, of Europe and the world—including Russia—who stand for freedom and liberal democracy. An AP story writes of his “unlikely journey from comedy to wartime leader,” noting that “With courage, good humor, and grace under fire that has rallied his people and impressed his Western counterparts,” he has bravely remained in Kyiv even though he has a target on his back. Loudly resisting Putin, he has defiantly declared that he will not leave his people: “our army is here, our civil society is here, we are all here, defending our independence, our state, and we will continue to do so.”

It is hard to imagine a political leader performing more bravely, articulately, and admirably. And doing so in the face of Putin’s bombs, Putin’s tanks, and Putin’s threats, especially the ominous threat to take down and punish the “Nazis” who comprise the current government of Ukraine, i.e., the threat of execution.

Zelenskyy, perhaps not incidentally, is an “actor” by profession.

But he is also an actor by circumstance, a political actor, in the sense celebrated by the political theorist Hannah Arendt, for whom politics is above all marked by the ways in which individuals step forward, enter the “space of appearances,” and allow themselves to be defined not be what or even who they “are” but by what they do. Her words on this topic read like a perfect gloss on what we are now seeing Zelenskyy do:

“The hero the story discloses needs no heroic qualities; the word ‘hero’ originally, that is in Homer, was no more than a name given each free man who participated in the Trojan enterprise, and about whom a story could be told. The connotation of courage, which we now feel to be an indispensable quality of the hero, is in fact already present in the willingness to act and speak at all, to insert one’s self into the world and begin a story of one’s own. And this courage is not necessarily or even primarily related to a willingness to suffer the consequences; courage and even boldness are already present in leaving one’s private hiding place and showing who one is, in disclosing and exposing oneself.”

Is there a better description of Zelenskyy, who is displaying both political and physical courage, refusing to hide or to flee, disclosing and exposing himself in the face of mortal danger?

Having jumped out into public life and assumed responsibility for the governance of the Ukrainian state in 2019, he is now rising to the ultimate political challenge, placing his life at risk so that he can speak, and fight, in defiance of Putin’s brutality.

Last Wednesday night, as the Russian invasion began, I drew the comparison to the Soviet invasion of Hungary in 1956. It’s an obvious comparison, for in both cases the invasion was a form of Russian imperialism justified as a “fraternal intervention” designed to bring the “stray” republic, supposedly “deluded” in its freedom, back within the “warm” embrace of the Russian state. “Peacekeeping” through artillery assault and aerial bombing. As in 1956, and again in Czechoslovakia in 1968, in Ukraine today democratic possibilities are being extinguished—the press is talking about the “decapitation” of the government—by a brutal authoritarian regime whose leader claims to Know what is right and to speak for History.

And as in Hungary in 1956, and Czechoslovakia in 1968, political leaders willing to speak truth to Russian power are placing their very lives at risk.

The ultimate fate of Volodmyr Zelinskyy—man, citizen, and President of the Ukrainian republic—remains to be seen. What is clear is that he will act, heroically, as long as he is able. How long that is, and what he proves able to do, is yet to be determined—which means we can all still play some role in this outcome.

A number of friends have observed that Zelinskyy, in his courageous words and deeds, reminds them of Imre Nagy. Nagy, the leader of the reform Communist government of Hungary in 1956 who was deposed by the massive Soviet military attack on Budapest known as “Operation Whirlwind,” was days later captured and arrested by Soviet forces and, within months convicted of treason in a show trial and secretly executed.

There is no reason to imagine that a similar fate might not befall Zelinskyy should he wind up in the hands of Putin.

But Nagy is not the only precursor of Zelenskyy. There is also the model of Istvan Bibo, the Minister of State in Nagy’s government who refused to leave his post at the Hungarian Parliament building, staying by himself there for three days, during which time he wrote and made public a powerful Declaration sometimes known as “For Freedom and Truth.”

Bibo, long a distinguished public intellectual and political figure, calmly but forcefully refuted Soviet charges that the Nagy government was in league with the CIA. Insisting that the government was not “following an anti-Soviet policy,” and not “marred by fascistic and anti-Semitic excesses,” he denounced the pretext of the Soviet military intervention as a “cynical” and dangerous lie. He then issued a public appeal:

“I hereby call on the Hungarian people not to regard the invading army and the puppet government it might set up as a legitimate authority and to deploy the weapon of passive resistance against it—save the public supplies and utilities of Budapest. I am not in a position to command armed resistance; I joined the Cabinet a day ago, I have not received any information on the military situation, and it would be irresponsible of me to dispose of the dear blood of Hungarian youths. Hungary has paid with enough lives to show its insistence on freedom and justice to the world. It is now the turn of the great powers of the world to show the authority of the principles laid down in the UN Charter and the power of the freedom-loving people of the world.”

Alas, Bibo’s brave words had little immediate effect. The Hungarian uprising was brutally suppressed. After the passage of a few months during which he remained surprisingly unmolested by the authorities, Bibo was arrested in early 1957, and sentenced to life imprisonment in 1958, convicted of “leadership of arrangements intended to overthrow the state order of the people’s democracy.” He was released from prison five years later, and spent the remainder of his life toiling in obscurity as a librarian before passing away in 1979.

While Bibo avoided the fate of Nagy, their common political effort to defend Hungarian autonomy and reform was effectively extinguished—until 1989, when after the fall of Communism both figures were honored posthumously for their patriotism. Bibo himself came to be regarded by some as “the greatest Hungarian democracy fighter,” and Central European University has created an Istvan Bibo Free University,  housed in its Democracy Institute.

There is a somewhat hopeful lesson even here, for in a sense the efforts of Nagy and Bibo, while suppressed, were ultimately vindicated by “history.”

But “history” is a tricky business, riven with uncertainty and indeterminacy, and never to be trusted. There was no guarantee that this vindication would ever come about in Hungary, and there is surely no guarantee that Ukrainian democracy will be successfully defended and restored.

But there is also no guarantee that it will be defeated.

For the battle for Ukraine has only just begun, Volodmyr Zelinskyy stands defiant as President of Ukraine, in command of an army supplemented by civil defense, and in possession of the admiration and support of scores of millions of citizens across the world, and the very careful support of NATO, and of the U.S.

The current crisis is fraught with human, political and military danger, to the people of Ukraine and to everyone in the region, and the world, who feels understandably threatened by the possibility of an escalation and even a nuclear confrontation.

There are no simple “solutions,” and there is no way to reliably predict the outcome.

But this much is clear: it is imperative that those citizens everywhere who care about freedom, democracy, and the vulnerability of Ukrainians in the face of a massive Russian onslaught must do everything in their power–our power— to support Ukrainian independence and democracy and to oppose Putin’s invasion.

This means acts of solidarity and philanthropic support for Ukrainians whether they are hunkering down or fleeing the country.

It means acts of solidarity and support for the many Russians who are protesting Putin’s war and resisting his authoritarianism–for these protests will play an important role in the outcome.

It means that NATO, and the U.S., must stand strong, supplying the Ukrainian army with weaponry; imposing the strongest possible sanctions regime on Putin and the group that keeps him in power; and making clear–via public statements, private diplomacy, and troop deployments–that the borders of NATO countries are inviolable.

We must do what we can to support Ukrainians as they develop and deploy their own means of political empowerment and coercive force.

This requires our own forms of political empowerment and our own support for coercive force.

The defense of Ukraine is a monumental political challenge.

And as we contemplate this challenge, and engage it as best we can, we can do no better than to watch and to listen to Volodmyr Zelinskyy, an inspiration, a rallying point, and the hero we now need.

Originally published at Democracy In Dark Times on February 26, 2022