The NGO Sector in Slovakia as a Subject of Conspirators 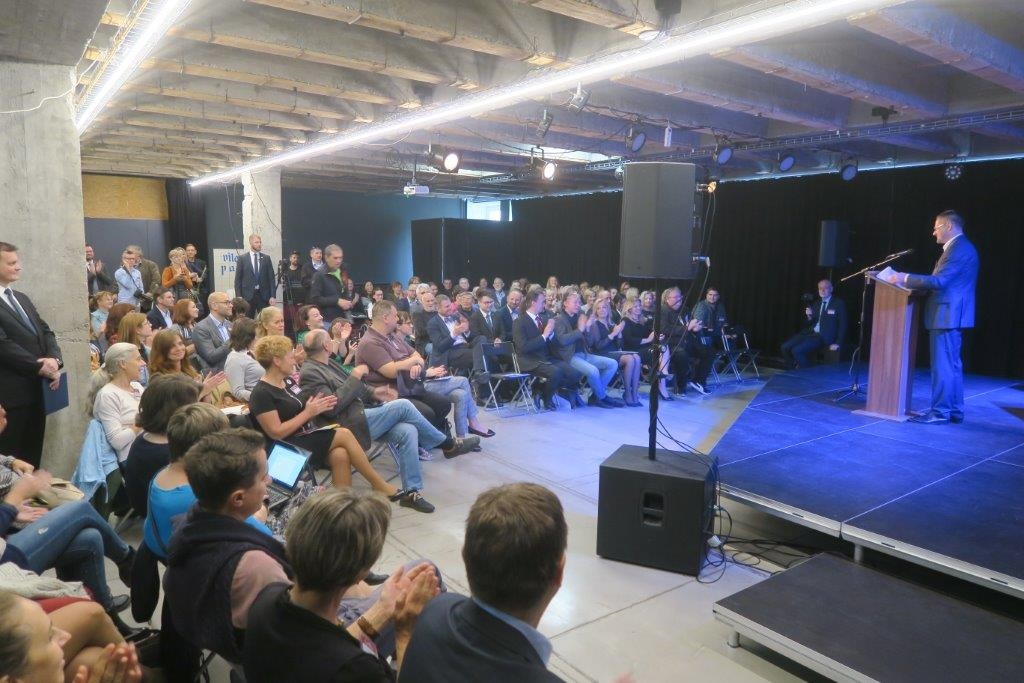 The NGO Sector in Slovakia as a Subject of Conspirators

Photo: from the opening of the October 2019 Orbis Civitates conference (200+ participants – no such gathering of NGOs was organized since 2013). On behalf of the organizer (Open Society Foundation) the author is welcoming the President of Slovakia Zuzana Čaputová and Minister of Interior Denisa Sakova, sitting in the front row (right side in the photo). Photo credit: Open Society Foundation Bratislava.

Overnight, on Monday, February 26th, 2018, Slovakia became a very different country. The news of the brutal murder of a young investigative journalist and his fiancée in their village house at the outskitrts of the capital shattered all illusions about corruption in the country being remote and harmless. The deaths of Jan Kuciak and Martina Kušnírová shook the nation into realization that the country’s stability was legitimized on empty promises.

A new dawn? Not really…

The tragedy sparked the largest public protests since the Velvet Revolution of 1989. Organized by a new generation of activists, the peaceful weekly rallies “For Decent Slovakia” had catalysed a series of rapid political changes that almost put Slovakia on a pedestal of leading liberal democracies in Europe. The reshuffle of the Government took only a month. Municipal elections in November 2018 stripped the coalition parties of their mayors in all major cities and left just one of eight regional governors standing for their colors. Next came the victory of Zuzana Čaputová, who became the first female president of Slovakia in March of 2019. And the progressives represented by two new parties, PS and SPOLU, won the elections for the European Parliament in May, taking four out of 14 seats assigned to the country.

After the police investigation of the murders revealed corruption at the highest levels of the government, linking politicians to the mafia, the start of President Čaputová’s term in June was a triumphant moment. It seemed as if we could get rid of the wrongdoers, have an open and inclusive society, and have the rule of law all at once.

However, the parliamentary elections in February of 2020 turned out to be a mixed blessing. On one hand, the rule of the Smer party of 12 years was finally over and fears over the further rise of neo-nazis did not materialize, but, on the other hand, the former President Kiska’s party barely made it into the Parliament and the progressives very narrowly missed out. The current four-member coalition thus includes an anti-corruption crusader of a prime minister, who uses his private Facebook account the same way Donald Trump manages his Twitter, a soap opera of a businessman with his “family values” spread across his nine partners and ten children, a minister of economy whose liberalism is palpable only in business affairs, and finally, an acting chairwoman of the president’s party, whose boss had vanished from the public eye under the cover of the Covid-19 lockdown.

Cuvée of civil society and politics

This elaborate introduction is necessary because the understanding of the conspiracy around the non-governmental organizations (NGOs) in Slovakia is impossible without a brief summary of Slovak politics, as the current political parties have blended in with the civil society movements and subjects. The representatives of the new parties widely claim that they are not “politicians” but rather the executioners of the people’s will. They seem to have usurped a great deal of the public space previously occupied by the civil society actors. So when the NGOs raise their concerns, they are easily silenced for being “too political.”

Three out of four coalition parties have broad public support, but their party membership and structures are a political joke. These parties are more like autocratic movements united around their leaders than parties answerable to their constituents. While the NGOs focus on particular issues, seeking to resolve the need of the constituencies they want to attend to, these parties rally around their leaders and move from one topic to another in accordance with the whims and fancies of either the leader or their support base.

Neither pinnacle of progressivism nor dictatorship

Slovakia today is not that different from other Western countries that have been turning away from the values of open society and liberal democracy for some time. Fear of the unknown global events, such as climate change, financial crisis, migration and now the Covid-19 pandemic, have been too much to deal with, even for the more worldly and urbanized societies. Chain emails and social media have made conspiracy theories run wild, while the voices of reason are immediately regarded with suspicion. The fact that blending of the mainstream media and disinformation outlets is assisted not only by the technology, but also by the politicians, who fail to distinguish between the two, makes things even worse.

Like President Trump in the United States, a fair share of politicians in Slovakia stoke conspiracies. They often view NGOs, and those in the advocacy line of work in particular, as enemies. Government watchdogs and advocacy organizations that stand in the way of power are viewed as foes. While those who quietly tend to the children, elderly and the sick are supported and praised, the standing of an NGO can suddenly change once it decides to disagree with a policy or action of the ruling coalition. The worst treatment is reserved for the NGOs funded from ”abroad,” especially those from the United States and the EU. This is in part due to the great success of a pro-Russian narrative of the “spoiled West” that is supposedly undermining the “traditional values”  through its “Gayrope” funds. Unfortunately, the conservative politicians are eager to actively promote these conspiracies.

This simplified, dichotomous way of looking at NGOs is not different from how social work was viewed in the communist era; active citizens were only allowed or encouraged to do public good under the watchful eye of the National Front, an umbrella platform of the Communist Party for various civil society organizations. Today, we see that history repeating itself as name-calling, shaming, and harassing NGOs, and threats to shut down their operations or cut their funding have become commonplace every time an NGO challenges those in power.

A society resting political power that congeals politics, business interests, the judiciary and friendly NGOs into a single pole is like a chair resting on just one leg. Such a society is bound to be unstable. I hope that people of Slovakia will eventually see the benefits of a chair that relies on four separate legs, representing political power, business interests, the justice system, and civil society. And I still believe that we can construct a more comfortable and secure seat, regardless of what our neighbors choose to do.

Jan Orlovsky is the head of Open Society Foundation (OSF) Slovakia since 2015, starting his career as a foreign service officer of Slovakia weeks before the split of Czechoslovakia in January of 1993, and joining the Foundation after a brief stint in politics and a decade in the private sector.