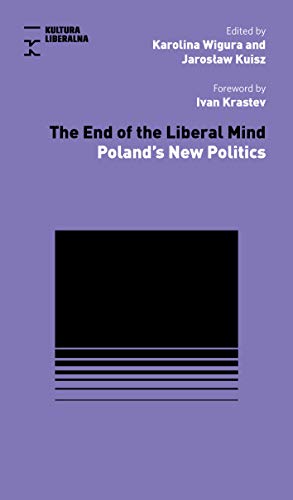 but It Missed the Elephant in the Room

Book Cover: The End of the Liberal Mind

There is something telling about naming a book The End of the Liberal Mind, when you have to wait till the very end to find the slightest of hints what liberalism is supposed to mean. Is it a philosophical idea? A political concept? An economic system? An emotion? The danger of looking solely at illiberalism when trying to understand liberalism is that if liberalism itself is deemed so obvious as to not deserve an explanation, it might indeed be dead. But is it? It depends on the definition. Thus, since the volume’s authors fail to explain what they mean by liberalism, I offer a working definition presented recently by Adam Bodnar, Poland’s Ombudsman who has been instrumental in the fight for people’s rights and freedoms, especially since 2015 when PiS (Law and Justice) party came to power. And so, according to Bodnar, a liberal democracy is a system which guarantees that people‘s rights and freedoms are respected. However, in his opinion Poland is turning into a state of creeping “competitive authoritarianism,” in which the protection of people’s rights and freedoms becomes difficult if not impossible. (To illustrate this, the widely-contested, PiS-party-staffed Constitutional Tribunal ruled that Bodnar will have to leave the office by the end of July 2021, leaving the post of the Ombudsman most likely unfilled). In this sense, Poland’s current PiS-led government is rejecting liberal foundations, i.e. the rights and freedoms of individuals, to strengthen its own agency. It is a discussion about a system of political governance and the growing imbalance of powers within it, which is the focus of the volume. What it misses entirely, however, is the lifeblood of liberalism, or any political system for that matter, namely the people; more precisely in this particular case: citizens. Civic participation in Poland is not only older than its post-1989 democratic system. It is also both a theoretical concept as well as a social, cultural and political practice that has been researched for years by numerous sociologists in Poland, including one of the field’s greats, Jerzy Szacki. Therefore, I was very much surprised to discover that none of the authors of The End of the Liberal Mind found civic activism a topic worth discussing in a volume on liberalism. It is particularly shocking in light of the fact that since late 2015 thousands of civic protests have been held in towns and villages all over Poland, whether under the banner of KOD (Committee for the Defense of Democracy), Wolne Sądy (Free Courts), or Strajk Kobiet (Women’s Strike). Yet you will not find any discussion about them in the essays. What’s more, unless you closely follow Polish politics, you might not even notice that PiS is supported by a minority of Poles, although the party, together with its shaky coalition partners, does have a majority of the seats in the parliament, and continues to be the most popular party. The devil (or hope) is in the details, but nuance is not always a friend of public intellectuals in the Polish media landscape—I have been studying this topic especially in the context of political elections.

Nonetheless, this does not mean the book is not worth reading, as it certainly shows a particular zeitgeist. The End of the Liberal Mind serves as a perfect example of how Polish opinion writers tend to look at contemporary Poland—in colorful broad strokes that at times miss the necessary details. For example, take Rafał Matyja’s essay on the history of the PO-PiS party duopoly and the recent decade’s struggle for power in Poland’s party system. While a compelling read, in his piece Matyja, a conservative writer and academic, all but equates the machinations of the Civic Platform-led government with those being committed since 2015 by Law and Justice. The author only barely notices the current government’s deliberate undermining of the separation of powers, to say nothing of the rule of law, which Bodnar describes as “competitive authoritarianism.” If the infringement of people’s rights is not worth mentioning, then where should one look for liberal values worth fighting for in a representative democracy? Fortunately, the book offers some more contextualized insights as well. Stefan Sękowski, a member of Nowa Konfederacja (New Confederation), a right-wing think tank, offers a refreshing example of intellectual honesty in his take on the “change for good” (“dobra zmiana”) that PiS failed to deliver. Sękowski’s essay is filled with disappointment over what has become of the promises made by PiS. For followers of political think tanks in Poland it comes as no surprise, since in the recent years some of the most sober criticism of the populist right-wing government has been coming from the disenchanted intellectuals on the right. In contrast, intellectuals and analysts in the center of the political spectrum have been mostly focused on chasing their own tail. Nonetheless, I disagree with Sękowski when he describes Jarosław Kaczyński, the leader of PiS, as a “hyper-democrat”—his brand of democracy is rather of the plebiscitary (and backseat) leader kind. It should be added that this counterargument is also made later in the book by Tomasz Sawczuk in his contemporary archeology of Kaczyński’s political views. Nonetheless, it is hard to ignore that Sawczuk, a member of Kultura Liberalna (Liberal Culture), bends over backwards for example when he explicitly clears the leader of PiS of homophobia, as if the proclamation of “LGBT free zones” in numerous towns and villages all over Poland and the openly homophobic rants made by Andrzej Duda during the presidential campaign in 2020 (also omitted in the book)—unlike everything else in the party’s activities—were beyond Kaczyński’s influence. Still, it is worth reading these two pieces together because they come to the same conclusions, but in relation to the opposite sides of Poland’s political scene: Sękowski writes about Kaczyński’s strategy of strictly targeted charity instead of introducing systemic change as a way of maintaining power (hence the initial popularity of the Family 500+ program, which provides financial aid to families with children). Sawczuk makes the same remark, but he points his finger at “conservative liberals and economic libertarians.” According to the horseshoe theory, the political far-left and far-right closely resemble each other; if you are searching how it works in practice, this serves as a perfect illustration.

Maciej Gdula offers the flip side of Sękowski’s coin. An academic and an MP of the left-liberal Wiosna (Spring) party, Gdula discusses the fundamental change in the functioning of politics since the spread of the internet, although I believe what he really means is social media. Indeed, the political narratives—as Gdula calls them—are drowned in petty Twitter shitstorms between politicians and other users. Yet one should not forget that political mud fights became commonplace in traditional media talking-heads shows, especially on television, long before the emergence of social media platforms, and the many-to-many nasty brawls they enabled. At the same time, contrary to Gdula’s argument, it is hard to ignore that PiS’s and president Duda’s election campaign slogan, (“good change”) can be easily considered a prime example of “narrative” described in the essay. Furthermore, PiS party’s politicians are widely known to receive strictly enforced daily briefings on what topics to discuss (or spin) with journalists—another clear illustration of not only having an official “narrative”, but sticking to it, too. In sum, following Gdula’s train of thought I have to disagree with his interpretation: in my opinion the fact that PiS has been so successful in the political sphere shows the party’s ability to control both social-media fights (with the use of bots and trolls when needed) as well as the bigger narrative. In addition, in the context of narratives Gdula writes about an important report he published in 2017, which was widely discussed in Polish media. I mention its full title because it is important: Good Change in Miastko. Neo-authoritarianism in Polish Politics from the Perspective of a Small Town (translation mine). While the findings of the report were undeniably thought-provoking, the public debate quickly turned to treating the results of the interviews conducted in the small town as representative for Poland as a whole. Few cared to notice the error. As a result, Good Change in Miastko sparked a number of opinion pieces in different media outlets, but they often blurred the insights forgetting that most of the eligible voters did not vote for PiS—although they did for Andrzej Duda, twice.

Finally, it should be stressed that Sawczuk is the only author in the volume who makes any attempt at confronting the “L” word, which in and of itself deserves praise. He asks a basic question: “Aren’t we subject to too much authority?” Sadly, although Sawczuk follows the other authors in pointing out the many ways in which the PiS-led government is illiberal, he leaves his own question without comment. The sociologist’s Paweł Śpiewak’s remark from 2010, quoted by Sawczuk, thus strikes as particularly biting: liberals in Poland are simply not interested in exploring what political liberty means in practice. Is Sawczuk being self-critical? It is hard not to notice that, a decade later, The End of the Liberal Mind demonstrates that the aversion endures.

This leads me to what I find the biggest shortcoming of the book: the authors do little service to understanding liberalism if they only focus on what it is not. How are we to know whether the “liberal mind” has run its course if we don’t bother explaining what it was—or perhaps still is—in the first place? Nevertheless, Sawczuk’s intriguing proposal of a “pragmatic liberalism” offers a glimmer of hope, at least for the future. The burning question is what does “pragmatic liberalism” mean in reality? How much authority is not too little, not too much, but just right for this version of liberalism, and for the people with their rights and freedoms, to succeed in Poland? Taking the elephant in the room into consideration may prove helpful. What is this elephant, you ask? Civic engagement.

The piece is part of the Democracy Seminar Thinking About The Crisis of Liberal Democracy Through a Polish Lens: A Symposium on The End of the Liberal Mind: Poland’s New Politics.