The Expressive Antidote to the Trumpist Virus 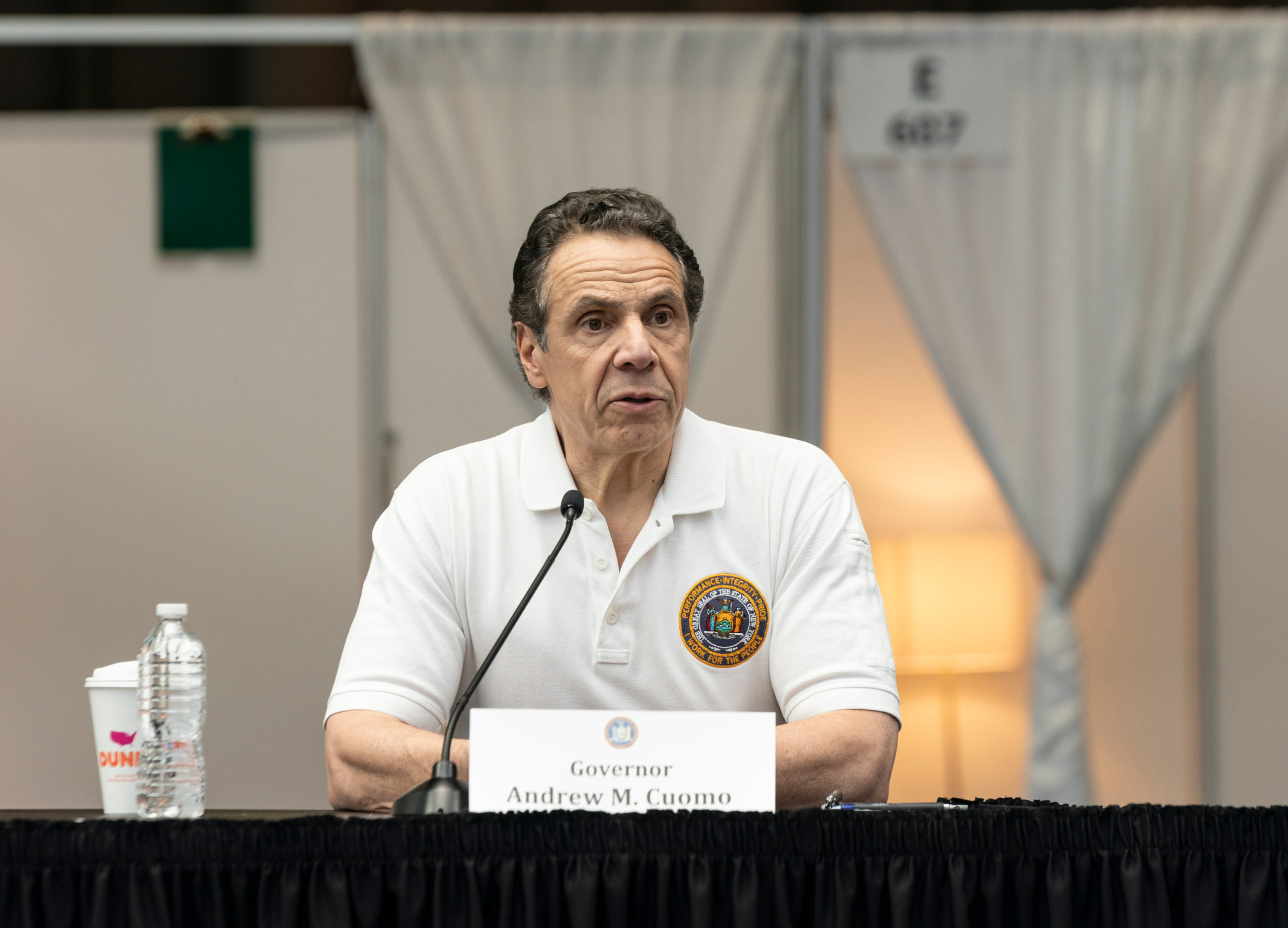 The Expressive Antidote to the Trumpist Virus

How Erving Goffman helps us understand the hidden power of Biden, Sanders, and the Democratic governors In order to defend and extend democracy in America in the time of the pandemic, the Democrats must develop a way to harness their considerable expressive powers. They must creatively present themselves and their policies in opposition to Donald J. Trump and Trumpism, including his excruciating slow and chaotic response to the pandemic. An overlooked expressive dimension of politics is, I believe, a key to defeating the madness of the President of the United States and the Party that blindly supports him.

We can appreciate this by drawing upon the insights of the pioneering ethnographer of social interaction, Erving Goffman. There is irony in this. Goffman is not usually considered a political thinker, nor did he think of himself as such, but his creative examination of the details of social interaction, in my judgment, illuminates an important dimension of political life that is now particularly significant.

All social interaction, Erving Goffman explains, has an expressive as well as an instrumental dimension. The expressive dimension is important as we work together not only to get things done, but also “to define the social situation.” We attend a lecture or a sermon, for example, to be enlightened or spiritually moved, but in order for these purposes to be realized, we have to demonstrate to ourselves and others that we are in situations where such enlightenment and spiritual movement happens. We confirm our identities to ourselves and others, as we contribute to the definition of what happens in lecture halls and houses of worship. We show we are paying attention. We respond to irony and dramatic turns of phrase, and striking conclusions, not only in our minds but also in the gestures we share with each other. These gestures sustain our understanding of what surrounds us and how we should act. These small things can have very large political consequences, as I explored in my book, The Politics of Small Things.

I’m thinking about Goffman and the expressive dimension of politics as I am social distancing, along with 90% of my fellow Americans. In the late mornings, here in New York, I often take a look at my governor’s daily press conferences. I don’t have a crush on Andrew Cuomo, but I am deeply moved by the way he has handled the crisis and expressed himself in words and deeds. I note that Cuomo’s admirers include progressives, such as Katrina vanden Heuvel, who are quite critical of many of his so-called neo-liberal policies, and also include many New Yorkers, including me, who are fully aware that Cuomo is not a nice guy, infamous for his backroom dealings, political feuds, and vindictiveness.

I also have watched the President’s daily briefings. The contrast between Cuomo and Trump is astonishing.

Consider Trump’s press conferences. His tone in his appearances bewilders. He oscillates, often in mid-sentence, between minimizing the disaster and taking it seriously, to the point of exaggeration. He celebrates the great job he is doing, as he vilifies those who question his assertions. He surrounds himself with experts in his conferences, but often doesn’t take them seriously. Incredibly, they stand shoulder to shoulder — no social distancing for him — as he mixes fact with fiction (think of his promotion of the unproven hydroxychloroquine). His high self-regard and intolerance for criticism prevail. He is animated when he celebrates himself and attacks those who don’t sufficiently defer to him, deflates when others take the stage and don’t praise him, grimaces when the experts he depends on present inconvenient truths, and stiffens as he tries to express empathy. He pompously attacks “nasty” reporters (mostly women) when they innocently ask serious questions.

Cuomo’s press conferences are striking contrasts. He humbly accepts responsibility for the present dismal state of affairs, as he reveals a mastery of the details of the crisis, and when he doesn’t know them, he defers to experts. He knows the numbers and effectively reveals that he feels the pain they represent. He celebrates the heroes of the moment, putting their bodies on the line: the nurses, doctors and hospital staff, the postal workers, transit workers, and others in essential services, including his brother, and shows genuine concern for the most vulnerable, such as his mother. He is passionate about defending the well-being of New Yorkers, as he reveals dispassionately that he knows that he and we may not be doing enough.

Cuomo is not alone in presenting a stark contrast to Trump. Other Democratic Governors, such as Jay Inslee of Washington State, Gavin Newson of California, and Gretchen Whitmer of Michigan are also distinguishing themselves. They have different policy priorities than Trump. They exhibit a different reliance on expert knowledge, a different reliance on the truth. And, they also all express themselves differently than Trump, appearing, in the flesh, as thinking and caring human beings.

Goffman distinguishes between expressions given and expressions given off. Both Trump and Cuomo want to give an impression of being in control, working to assert their authority by appearing as authoritative. They both want to “give” a good impression. But the impressions they are “giving off” differ radically. Trump gives off his self-centeredness, his lack of empathy, and his mood swings. Cuomo gives off his concern for those who are suffering, for essential workers and for the vulnerable, and he clearly shows how he leans on the experts who surround him, who know more than he does. The impressions his expressions give off explain his extraordinary national approval rating, which he shares with Democratic and Republican Governors who have taken the threat of the virus seriously. He and they have acted decisively, often in conflict with the Trump administration. These Governors not only pursue serious public policy in the face of an extraordinary threat; they express their seriousness. Look at  Inslee, Newson, and Whitmer, and see what I mean.

They are generating political power through their expressions. They are personally gaining great popularity, as they able to convince their constituents to act together in solidarity against the plague. I believe that they are helping their constituents and the broader American public to face the intolerable turn of events in their lives. This explains, I believe, why it is that people far to the left and to the right of Governor Cuomo are imagining him as an ideal President of the United States.

There are a variety of reasons why Cuomo’s candidacy is not only unlikely but undesirable, in my judgment. But I think his popularity suggests something much more practical: the need to harness in a concerted way the expressive power the Democrats are generating to present clear democratic alternatives to Trump’s inadequate response to COVID 19, showing that the Democrats can act on the alternatives in the coming years to sustain a more reasonable and just post-pandemic America.

I’m imagining the following ways for Democrats to reveal who we are, as well as what we would like to do together:

The policy alternatives are important. But just as important is to reveal expressively the people who would be enacting the alternatives, and how they can civilly act together with mutual respect in a concerted and reasonable way.

There are different additional ways to stage what I have in mind. But given Trump’s slow response to the pandemic and his inability to properly lead the nation as we face the profound challenges that COVID 19 present, some such marshaling of expressive action is imperative. Trump and his enablers have exposed the bodies of Americans to deadly danger and weakened American economic well-being, as they have been infecting the democratic body politic ever since his election.  We desperately need an antidote to the virus of Trumpism. Emphasizing the expressive dimension of the Democratic alternative is surely an important part of the cure we need.

Jeffrey C. Goldfarb is Michael E. Gellert Professor of Sociology at The New School for Social Research and Publisher of Public Seminar.