Rebirth of a Nation? 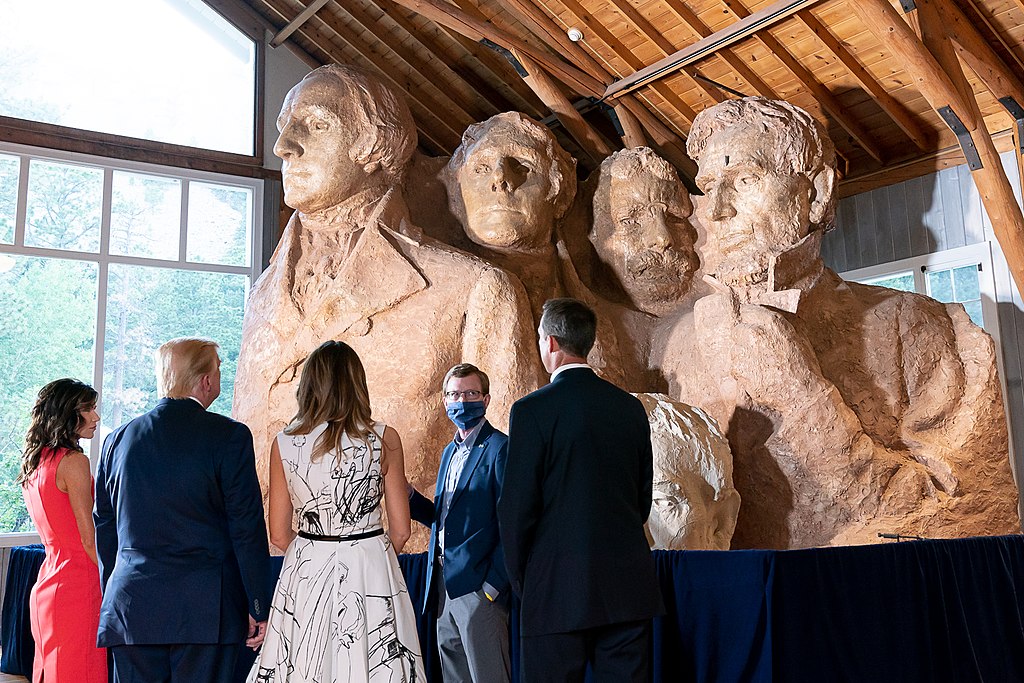 Rebirth of a Nation?

There is a dangerous method to Trump’s racist madness

Donald Trump is doubling down on his racism and xenophobia. This is widely acknowledged, and condemned, by many commentators. It is viewed, correctly in my judgment, as both a resort to the rhetoric with which Trump is most comfortable, racist and xenophobe that he is, and as a campaign strategy. Trump’s approach may seem bound to fail. It is empty in the face of deadly crises that demand real action, and it is divisive, and plays to a right-wing base that is probably too narrow to ensure an electoral victory in November. Even such an incisive analyst of racism as the New York Times’s Jamelle Bouie seems to think this: “Maybe This Isn’t Such a Good Time to Prosecute a Culture War.” Bouie argues that “Trump has gone to the well one time too many.” He may be right. I hope he is. But I fear he is underestimating the power of Trump’s toxic brew.

On the face of it, Trump is simply appealing to the most reactionary, cruel, and racist sentiments, defending Confederate statues and flags, denouncing Black Lives Matters protestors as “vandals” and “thugs,” and presenting himself as the only thing that stands between order and chaos.

But at a deeper level, Trump is doing that and more, appealing to a sense of peoplehood—essentially white peoplehood—that is much broader and thus more dangerous.

One sign of this “more” is an episode reported by the Washington Post on July 4: “Militias flocked to Gettysburg to foil a supposed Antifa flag burning, an apparent hoax created on social media.” The episode is pure Trumpism: fueled by disinformation ginned up on social media, determined to defend the flag from that most evil source of terror in the Trumpist imaginary, “Antifa.” But its racism is capacious, not narrow. The explicit enemy here is not “Blacks” but “Antifa,” an ideologically rather than a racially defined “threat.” The precious symbol being defended is not the Confederate flag, but the U.S. flag, the “Stars and Stripes.” And the location of this artificially constructed site of “American Greatness” is Gettysburg, mythically considered as “hallowed ground” ever since Lincoln’s famous Address, precisely because the blood spilled there was spilled by both sides of the Civil War. Indeed, perhaps the most vivid photo included in the article features two men standing side by side, one holding a U.S. flag, the other wearing a tee-shirt with the Confederate flag emblazoned on the front. United together in “defense” of “American greatness.”  Together.

The second sign of the dangerous breadth of Trump’s appeal: Trump’s very controversial Independence Day performance at the foot of Mount Rushmore. Yes, the enormous, kitschy edifice is a symbol of White Supremacy and the Manifest Destiny of “America.” But it is not a simple symbol of racism, because it includes not simply slaveholders Washington and Jefferson and “Rough Riding” imperialist Roosevelt, but Lincoln, The Great Emancipator and Savior of the Union himself. And indeed Trump’s speech there, while manifestly racist, and authoritarian, in numerous ways, was also surprisingly and cynically inclusive, invoking not Jefferson Davis, but Lincoln, and referencing a number of Black figures among the “national heroes” that Trump promised to venerate, including a suitably domesticated and whitewashed Martin Luther King, Jr.

Don’t get me wrong. In ways both subtle and explicit, Trump always offers red racist meat to his blood-red and lily white base.

But there is also a more complex rhetoric of nationalism in play, one that is authoritarian, neo-fascist, but also potentially inclusive, of a segment of the white population that does not identify with Confederate symbols, neo-Nazi symbols, and Q-Anon paranoia, but does identify with “American Greatness;” and even including some people of color who support him (“I’ve always had a great relationship with the blacks,” he has said repeatedly, oblivious to the racism of this very formulation).

In the face of the extraordinary spread of BLM protests, Trump tweeted that he has “done more for Black Americans, in fact, than any President in U.S. history, with the possible exception of another Republican President, the late, great, Abraham Lincoln … and it’s not even close.” In a follow-up interview the next day with Fox News, he equivocated slightly on Lincoln, saying: “let’s take a pass on Abraham Lincoln because he did good, although, it’s always questionable, you know, in other words, the end result.” All of this was predictably denounced by commentators, politicians, and activists rightly outraged by Trump’s “questionable” comment, and by the undeniably racist character of Trump’s entire public persona. The notion that he has done more for Black people than anyone but Lincoln is a most atrocious form of gaslighting by a malignant leader who has turned gaslighting into an evil art.

But while the “Never Trump” partisans of the Lincoln Project are unquestionably correct about the distance separating Trump from Lincoln, it is nonetheless true that Trump does sometimes appeal to a certain version of Lincoln, as defender of “the nation” and as strong leader capable of defeating his enemies and of superintending “the blacks” who apparently need a Strong White Father.

It is this combination of racism and nationalism that is so dangerous. And Trump’s version of it has striking parallels with what is perhaps the single most important racist cultural production in the twentieth century American history: D.W. Griffith’s “Birth of the Nation.”

The film was a groundbreaking development, the first full-length feature film widely distributed in U.S. history, and a box office blockbuster. It was a widely-viewed and hugely influential cultural representation, and it reflected, and reinforced, what became the conventional historical narrative during the Progressive era, which was an era of both racism and nation-building.

Based on a racist novel called The Clansman, the film’s narrative is straightforward, compelling, and propagandistically effective (as film critic Richard Brody observed in a 2013 retrospective, “The Worst Thing About ‘Birth of a Nation’ is How Good It Is”). In brief: the Civil War was an unfortunate War between the States that greatly disrupted American history, pitting brother against brother and “chum” against “chum.” Lincoln understood this, and wished for nothing more than to effect a quick and complete reconciliation between North and South (“with malice toward none, with charity for all”). But poor Lincoln, “friend of the South,” was killed, and the federal government came under the control of Radical Republicans who hated the Southern Way of Life, were power-hungry and arrogant, and who, egged on by nefarious “mulattoes,” used Reconstruction as a way to empower and to use ignorant, gullible, and licentious “Negroes,” who proceeded to attack civilization, form gangs, commit crimes, especially the rape of virtuous white women, and to turn the South upside down. Fortunately, these evil white carpetbaggers and the Negro tools they had empowered were resisted by the White Knights of the Ku Klux Klan, who helped to bring Reconstruction to an end. The white people of the North and South could thus be reunited in holy matrimony and fertile union; the Negroes could be intimidated from voting and put back “in their place” where, presumably, they could themselves be more productive, better patronized, and thus happier. A new nationalism—indeed a white Christian nationalism– was born.

The communicative power of this narrative was brilliantly analyzed by Michael Rogin in an important 1985 essay entitled “’The Sword Became a Flashing Vision’: D. W. Griffith’s The Birth of a Nation.” As Rogin points out, Griffith himself explained that he titled his film “Birth of a Nation”: “because it . . .  the Civil War was fought fifty years ago. But the real nation has only existed in the last fifteen or twenty years  . . . The birth of a nation began . . . with the Ku Klux Klan, and we have shown that.”

Griffith’s narrative is deeply racist. It represents Blacks as licentious, dangerous, and unsuited for freedom; it is nostalgic for the Lost Cause of the Confederacy—for slavery; and it glorifies Klan violence as both justified and redemptive. At the same time, it is a unifying narrative, in which the real villains are white abolitionists and Radical Republicans—the “Antifa” of their era—and their mixed-race accomplices; in which both white people in general and Black people are the victims of a terrible “social experiment”—Civil War and Reconstruction—that was imposed on them by extremist ideologues who were also very perverted, “bad people;”  and in which the heroes are white redeemers—Lincoln and the KKK and perhaps someone like Woodrow Wilson—seeking to restore order and harmony to The Nation.

The parallels between Griffith’s “Birth” and the veritable “Rebirth” promised by Trumpism (“Great Again”)  are striking. The way that new media are employed. The way a certain “exemplary” version of “the blacks” is patronized, while Blacks as a group are viciously disparaged, especially when they stand up for themselves. The way violence is deployed, both rhetorically and in actuality. And the way the real political challenges of the time are reductively explained by a paranoid conspiracy theory featuring the evil machinations of “radicals” envisioned as “anti-American” and perhaps even “rootlessly cosmopolitan.” (Jelani Cobb noted the ongoing resonance of the film in his sadly prescient 2015 piece, “The Sad Prescience of ‘The Birth of a Nation.’” )

The genealogy of Trumpist rhetoric is of course complex, and includes other sources as well: from Charles Lindbergh to George Wallace to Jesse Helms to Roy Cohn to Pat Buchanan to Rudy Guliani.

But the ways that Trump echoes Griffith are particularly disturbing, because they represent an effort to mobilize genuine mass support by combining the cruelties and resentments of racism with evocative and “patriotic” appeals to a rebirth of national grandeur. This is a very toxic mix.  Trump has already had much success peddling it to his base. And it would be an enormous error to underestimate the possibility of his continued success. We cannot assume that policy failure, or even mass death via Covid-19, will suffice to undermine his hold on power. We need to defeat him, decisively: by drawing from and helping to further fuel the rebellious energies currently mobilizing many citizens against him and the racism he supports, by doing the hard work of campaigning against him, and making sure that the November election is free and fair, and its results respected, and by promoting a more inclusive, egalitarian, and genuinely liberal and democratic narrative of American citizenship.