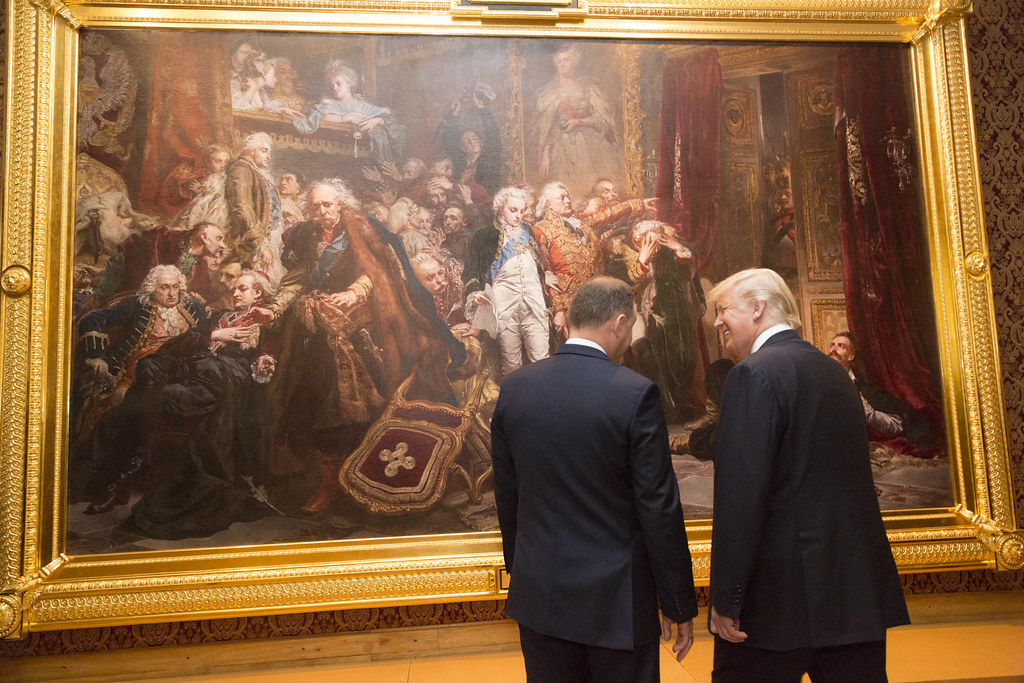 We often hear that in times of war, political divisions should be put aside. As Polish government officials like to say, this isn’t “the right time” to discuss petty domestic issues. Yet, it’s apparently the “right time” for them to continue to dismantle Poland’s democracy.

It might seem that the war in Ukraine will change everything about our politics, especially in terms of our approach to the most important issues – our security, European integration, and the values on which the Polish state is founded. At least this is what I thought in the last days of February 2022. I watched in awe as both chambers of the Polish Parliament passed resolutions by acclamation. I was relieved to see the leaders of my country getting along and keeping in touch with the rest of the Western world, beginning to play a more important role in international politics, and sometimes even setting the tone of the discussion. For the first time in years, I felt proud of my country when more and more foreign journalists called asking about Poland’s generous welcome of Ukrainian refugees. Polish civil society has become a better ambassador of Poland than a hundred foundations financed by the state.

It might seem that the war next door will make us reflect on our security and realize who is a true friend, with whom it is worth building long-term relations, and why the Western model of democracy, based on respect for the rule of law and human rights, should be our lodestar.

Unfortunately, mere three weeks into a bloody and terrible war, when Polish civil society was welcoming hundreds of thousands of refugees, the ruling camp wasted no time in moving us further away from the European Union.

Rather than admit their failure, Polish authorities prefer to blame the EU

The rule of law continues to be the main bone of contention. Poland still does not comply with the judgments of the Court of Justice of the EU, and the European Commission still withholds funds from the Union’s post-Covid 19 NextGenerationEU stimulus plan. Government officials (and especially the more radical members of the ruling right-wing coalition represented by the United Poland camp) roar repeatedly that Poland is entitled to these funds simply because there is a war going on. And since there is a war, the logic goes, Poland must be helped unconditionally and Brussels should forget about everything that happened before. But instead of just shouting about it, it would suffice to quickly introduce legislative changes and allow removed judges to return to their rightful place. But the government’s logic dictates that it is better to push the blame on the opposition or the EU itself than to simply admit a mistake and fix the consequences of years of senseless struggle upending the rule of law and staining Poland’s good name.

What’s more, at the same time, the Attorney General and the Minister of Justice Zbigniew Ziobro could’ve sent a simple letter to the Constitutional Tribunal reading: “I withdraw the motion regarding an inquiry into the compatibility of the European Convention on Human Rights with the Polish Constitution”. Instead, he persisted in pursuing the case even though the President’s representative, Prof. Dariusz Dudek, sent him a clear warning sign. At the hearing, Dudek stated that this was not the best time to deal with this topic. Yet, Law and Justice-appointed judge Mariusz Muszyński decided to hand down a verdict. He did not foresee, however, that it happened on the very same day when Russia decided to withdraw from the Council of Europe. Mariusz Muszyński is still a member of the Venice Commission. Let’s hope that he will not use this honorable forum as a platform to boast about how it feels to question the authority of the Strasbourg Court.

Although Prof. Dudek acted correctly, President Andrzej Duda decided to further escalate the rule of law crisis. There have been many rulings by the European Court of Human Rights about systemic dysfunctions in the process of appointing judges. And yet, for the President, the National Council of the Judiciary (NCJ) is still a perfectly normal, flawless constitutional body.

The President believes that he can fix all reservations and legal doubts through his hand-picked judicial nominations, treating them on par with divine anointing.

This time, the new slate of judges appointed to the Supreme Court include Professor Elżbieta Karska, who had been proposed twice before as a candidate for a judge of the European Court of Human Rights. However, Polish candidates, including Karska, were rejected twice by the Parliamentary Assembly of the Council of Europe due to the lack of transparency in their selection process. Other than Prof. Karska, more than 70 judges rised through the ranks thanks to President Duda’s legally dubious nominations. I feel the greatest resentment towards those of them who decided to use the situation as an opportunity to be promoted. Their insatiable desire for higher office seems to be more important than the fate of their colleagues who are being suspended.

The caravan goes on

Speaking of the National Council of the Judiciary, the end of its term is quickly approaching, and new members must soon be elected. It’s a great opportunity to end at least one major dispute, and return to the solutions agreed upon during the Round Table Talks in 1989, namely letting judges themselves elect the members of the NCJ. They don’t need the Sejm for that. But the caravan goes on, and the ruling camp has no intention of walking back. People known for their unquestioning party loyalty, including Łukasz Piebiak [who left the Ministry of Justice after media outlets exposed his involvement in a campaign aimed at intimidating judges who refused to toe the party line, ed.] are running for the NCJ. If Krystyna Pawłowicz [former PiS-affiliated MP known for her profane anti-European tirades, ed.], was promoted to become a Constitutional Tribunal judge, then Mr Piebiak can become a member of the NCJ. After all, who will be there to stop Polish authorities from doing it?

President Duda decided to cool down some of the political heat by vetoing the “lex Czarnek” bill [a controversial amendment to the education law, ed.]. Thus, the Minister of Education Przemysław Czarnek (together with superintendent Barbara Nowak [known for her sympathies for antivaxxers and catholic fundamentalist circles, ed.] and other high-level decision makers in the field of education) did not gain a tool to repress school principals and reorganize Poland’s education system to the liking of the ruling right-wing coalition. Yet, even if the bill ultimately didn’t come into effect, I’m afraid that the changes it was meant to solidify are already in place. Continued pressure, tension-building, and antagonizing public statements certainly have a “chilling effect”. Principals will already think three times before inviting an outside civil society organization or independent experts to their school.

But the President’s veto was not for nothing. On the same day, he introduced a bill to establish the Copernican Academy. I am not an economist and I will not analyze whether Poland can currently afford to create another institution resembling the Polish Academy of Sciences. I am much more puzzled by the mysterious provisions mentioning the organization of the Copernican Congress. It will take place in Toruń in February 2023. Curiously enough, according to the provisions, the police will gain various powers to check people who work or participate in the congress.

What’s more, spontaneous gatherings will be banned in Toruń three days before and two days after the congress. There were no such restrictions when Pope Francis was in Poland.

Even during Donald Trump’s visit in 2017, demonstrations were allowed. What is going to happen at the Copernican Congress that any gatherings must be banned in advance? Is a historical re-enactment of the burning of Giordano Bruno on the agenda?

A big step back for Poland’s democracy

After “lex Czarnek” was vetoed, the Minister of Education did not waste any time. Two weeks ago, he dismissed the rector of the University of Wrocław, Professor Przemysław Wiszewski. The Conference of Rectors of Academic Schools in Poland and the university’s Senate protested the decision. The official reason for his dismissal was his allegedly unauthorized management of funds from a grant that he was overseeing. As it often happens in such situations, Minister Czarnek followed Beria’s infamous motto: “show me the man and I’ll show you the crime”. This way, Mr. Czarnek joined the ignoble group of communist-era ministers persecuting rectors who refused to toe the party line. In Poland, universities may elect their rectors, but the final word now belongs to the Minister. This is the new interpretation of the principle of university autonomy.

We often hear that in times of war political divisions should be put aside. As Polish government officials like to say, this isn’t “the right time” to discuss issues other than national security. Yet, it’s apparently the “right time” for them to continue to dismantle Poland’s democracy by depriving citizens of the right to a fair trial, undermining the rule of law, limiting the freedom of assembly, and questioning academic freedom.

Let’s help refugees, support civil society, and fight for special EU support funds for local governments. But let us also remember that Ukrainians are not fighting for an authoritarian state. They are fighting for a democratic state that deserves its rightful place in the European Union. It is difficult to imagine a more powerful case for why we cannot allow the gradual and methodical dismantling of the democratic Poland we have built over the last three decades.

This article was originally published at Gazeta Wyborcza

Adam Bodnar is a law professor at the SWPS University of Social Sciences and Humanities in Warsaw, and the former Commissioner for Human Rights of the Republic of Poland.