This symposium contains essays by Michael Walzer, Sheri Berman, Leo Casey, and Jeffrey C. Isaac that reflect on the principles and possibilities of social democracy and liberal democracy in our current political times. The pieces constitute extensions of the authors’ presentations in the “Crisis of Democracy” panel that took place at the American Political Science Association 2018 Annual Meeting, organized by Leo Casey and originally convened to respond to pieces published in a special issue of Dissent magazine.

The rise of right-wing populism is probably the most pressing problem facing Europe today. Many analysts, including myself, have linked the rise of populism to the decline of the social democratic or center-left. Many traditional social democratic voters now vote populist; social democracy’s embrace of a “kinder, gentler” neoliberalism opened a policy “space” populists filled with welfare-state chauvinism; and social democracy’s fading electoral fortunes have rendered majority left government or, in many European countries, any stable majority government impossible, making it more difficult to solve problems, increasing dissatisfaction with democracy and support for populism further. But beyond these connections lies a more fundamental one: the loss of the sense of the possible that social democracy injected into postwar liberal democracy.

Social democracy was the most idealistic, optimistic ideology of the modern era. In contrast to liberals who believed “rule by the masses” would lead to the end of private property, tyranny of the majority and other horrors and thus favored limiting the reach of democratic politics, and communists who argued a better world could only emerge with the destruction of capitalism and “bourgeois” democracy, social democrats insisted on democracy’s immense transformative and progressive power: it could maximize capitalism’s upsides, minimize its downsides and create more prosperous and just societies.

Such appeals emerged clearly during the interwar years, when democracy was threatened by populism’s more dangerous predecessor — fascism.

In the United States, for example, FDR recognized that his job was not merely fighting the Great Depression, but also the fear that democracy was headed for the “dust heap of history” and fascist and communist dictatorships were the wave of the future. This required not merely practical solutions to contemporary problems, but also convincing citizens that democracy offered them hope for a better future. As Roosevelt proclaimed in his first inaugural address:

Compared with the perils which our forefathers conquered because they believed and were not afraid, we have still much to be thankful for… [Our problems are not insolvable, they exist] because rulers have failed…through their own stubbornness and… incompetence… This Nation asks for action, and action now… I assume unhesitatingly the leadership of this great army of our people dedicated to a disciplined attack upon our common problems… The only thing we have to fear is fear itself. 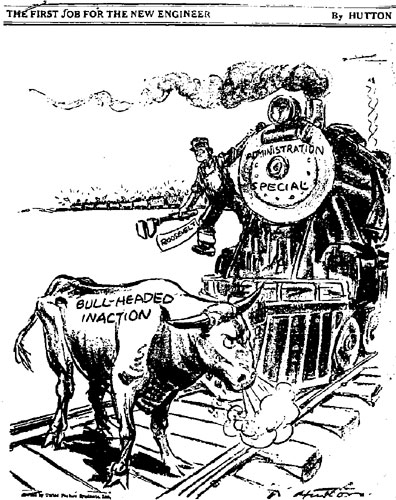 “His First Job,” a political cartoon published in 1933 by Hutton in the Marshall (TX) Messenger, depicts the daunting task ahead for FDR.

A similar dynamic played out in the other center-left success story of the era — Sweden. Recognizing the danger from the unstable minority governments that plagued the country during the interwar years, the growing power of fascism, and the Great Depression, the social democratic party (SAP) developed a new view of the relationship between the state and capitalism, culminating in its famous championing of “Keynesianism before Keynes.” Like Roosevelt they offered voters concrete solutions to contemporary problems as well as a commitment to creating a better world. During the 1932 election campaign a party newspaper, for example, declared “Humanity carries its destiny in its own hands… Where the bourgeoisie preach laxity and submission to…fate, we appeal to people’s desire for creativity…conscious that we both can and will succeed in shaping a social system in which the fruits of labor will go to the benefit of those who are willing to…participate in the common task” (Social-Demokraten, September 15, 1932). The party paired this economic appeal with a promise to turn Sweden into a “Folkhemmet” or “people’s home” — a country where the “barriers that…separate citizens” would be eliminated and there would be no “privileged or neglected, rulers or dependent, plunderers and the plundered.” The result was that whereas in countries like Germany and Italy fascists appeared politically active and ambitious, in Sweden the SAP became known as the party with exciting plans for creating a better world.

After 1945 social democratic parties broadly accepted the policies championed by Roosevelt and the SAP. Ironically, the success of these policies in stabilizing capitalism and democracy led many to begin viewing the left’s job in technocratic rather than transformative terms. This trend culminated in the late twentieth century with leaders like Blair, Clinton and Schroeder who believed transformative projects were passé or even dangerous and that the left’s goal should be managing capitalist democracy better than the right. The dangers or at least downsides of this were recognized by Blair himself who remarked in a 2002 speech that “sometimes it can seem as if it [politics had become] a mere technocratic exercise…well or less well managed, but with no overriding moral purpose.”

When times are good, such a politics can suffice, but when they are not a widespread belief that governments are unwilling or unable to change the status-quo leads to dissatisfaction with democracy. This, of course, is where populism comes in.

Populism peddles a politics of fear — of crime, terrorism, unemployment, economic decline, the loss of national values and tradition — and asserts that other parties are leading their countries to disaster. Surveys make clear that populist voters are extremely pessimistic: they believe the past was better than the present and are extremely anxious about the future. But pessimism has infected Western societies more generally. A recent PEW survey for example revealed that even though growing percentages of European citizens view their country’s economic situation as dramatically better than a decade ago, this has not translated into greater optimism about the future. Indeed, in many European countries the “experience-expectation” differential has grown: in the Netherlands, Sweden and Germany, for example, approximately 80% or more say the economy is doing well, but less than 40% believe the next generation will be better off than their parents. These views reflect a troubling reality: particularly in times of change and uncertainty, people’s views are shaped more by emotions than rational, empirical assessment. Recognizing this, Roosevelt, the SAP and earlier social democrats understood that countering pessimism therefore required not merely practical solutions to contemporary problems, but also an optimistic vision to counter the dystopian one offered by populists.

During the postwar decades social democracy provided just this. Against communism and liberalism they argued that people working together could use the democratic state to make the world a better place. The problems of the twenty-first century are different in form, but they are not different in kind. What is needed is a combination of pragmatic policies that can address challenges like economic inequality, slow growth and disconcerting social and cultural change, and an ability to convince citizens that liberal democracy provides the most promising path to a better future. The rise of politicians as different as Trump, Corbyn and Macron makes clear how desperate many are for leaders who insist that politics matters — that change is possible if the will is there. If center-left parties cannot respond to that yearning, voters will turn to other parties that do — with potentially dire consequences for the fate of liberal democracy.

Sheri Berman is professor of political science at Barnard College of Columbia University. Her latest book, Democracy and Dictatorship in Europe: From the Ancien Régime to the Present Day will be published by Oxford University Press in January 2019. This essay was originally published in Social Europe on October 10, 2018.