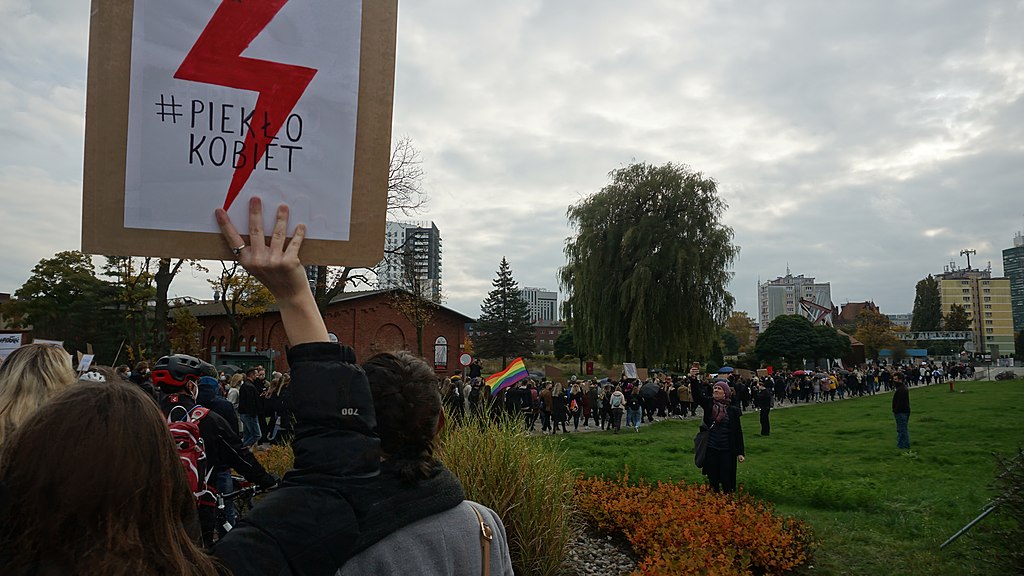 Channelling the grievances of women and of the LGBTQ community The pro-choice protests that started on October 22, 2020 are the beginning of a wider social movement channelling the grievances of women and of the LGBTQ community, as well as other marginalized groups in Poland, write Helena Chmielewska-Szlajfer and Roch Dunin-Wąsowicz. What’s more, the protests are not only taking place in Warsaw, and other major cities, but have mobilized people across Poland in small localities, even those known to be quite conservative. These qualitative shifts allow us to claim that a new social movement is emerging.

This isn’t the first time that Poland’s disenfranchised groups are rising up in protest against the encroachment of the state into their private lives, or against being pushed out from the public sphere. The LGBTQ community which comprise up to 5-10% of society, and women who are more than half of the population have been at the forefront of this battle, though never really together. It is near impossible to decipher whether in this moment we have reached the tipping point in the battle for the rights of women and the LGBTQ community, those realizations usually come in hindsight. Today, however, we are witnessing not only an unprecedented social upheaval on the streets of Poland’s small towns, medium and large cities but also a formation of a new coalition against creeping authoritarianism, in all walks of life. That alliance is led by the tandem of women’s rights and LGTBQ activists constituting a new social movement.

Since October 22, 2020 people have been coming out onto the streets throughout Poland in unprecedented numbers. Within a week, by police estimates alone, almost half a million people took part in the protests in almost 150 locations, making them possibly the largest protests in Polish history. The protests were first organized by the Women’s Strike (#StrajkKobiet), which dates back to 2016 when the Law and Justice government first pondered radically restricting women’s right to choose. Subsequently a great deal of them began to be organized spontaneously by people frustrated by the contested Constitutional Court’s ruling and by the government’s approach towards women. The #StrajkKobiet hashtag and the red lightning bolt sign have become symbols of the protest. Moreover, while in recent years the Polish flag has been all but hijacked by right-wing nationalists, now the protesters are taking it back by deliberately putting the white-and-red banner on display. On October 30, 100-150k people converged in Warsaw marking the largest anti-government demonstration since the 1980s, which was saturated with national symbols – from flag to slogans, from chants to dances.

Until recently women in Poland had the right to legally terminate pregnancies in three cases – if it was a result of a crime, if it threatened the life of the mother, or if the pregnancy wasn’t viable. Last week, Poland’s contested and controversial Constitutional Court deemed the last case (the so-called embryo-pathological reason) unconstitutional. In practice, this means that only a handful of abortions will be now performed legally, a drop from a mere thousand cases a year. Meanwhile, the estimates are that Polish women perform tens of thousands of abortions every year, either illegally in Poland, or everywhere in the European Union, and in the United Kingdom. This turn of events in the legal domain, instigated by the leader of the ruling party and deputy prime minister Jarosław Kaczyński, has prompted an unprecedented backlash from civil society groups and ordinary citizens. This can be now witnessed daily throughout metropolitan and provincial Poland amid the global pandemic. What is, however, special about this outburst of discontent is that it is a space where a new coalition of civil society is forming, the forefront of which are women’s rights activists and the LGBTQ community.

End of the contentious consensus

Poland’s abortion bill, one of the most restrictive on the continent, has been in place since 1993 – an emblematic example of a perversely regressive policy brought about by democratization that led to the subordination of women in Polish society. Dubbed as “the abortion consensus,” the bill was meant to appease the Catholic Church and liberals alike. And so it did, for almost three decades. In many respects, women were economically enfranchised under communism. Still, women’s rights have progressed in Poland since 1989 in politics, as well as in business, often beyond western standards, and that had been the public consensus before Poland joined the EU. Since 2004 the disparities between women in Poland and their counterparts across Europe have become glaring, especially when it comes to reproductive rights. Until recently, in the public’s perception women’s liberation was an (almost) done deal, and “feminism” has been often used as a derogatory term, restricted to fringe groups who have been demanding unrestricted access to abortion, better child support, and gender parity in politics and business. Feminists have been portrayed as fanatics on the margins of society, which has otherwise reached a consensus. Jarosław Kaczyński’s decision to put abortion back on the public agenda, through the intermediary of the politically-controlled Constitutional Court, has upset the apple cart.

The LGBTQ community in Poland is one of the most discriminated against and least legally protected in the EU. The aims of the movement – to ban hate speech, to legislate against hate crimes, to introduce marriage equality, and to recognize the rights of trans and non-binary individuals – have been painted as extremist, not only by the ruling radical right, but also by the liberal forces. At the same time, the LGBTQ community has a good track record of demanding recognition. The first case of civic disobedience took place in 2005, when the then Mayor of Warsaw – Lech Kaczyński (Jarosław’s late twin brother) – banned the Pride march, which did in the end take place. For a decade after that, the plight of the LGBTQ community did not change much, until it deteriorated once Law and Justice took power in 2015. During the subsequent local (2018), European and general elections (2019), as well as during the presidential campaign of 2020, LGBTQ have become a scapegoat for the ruling party and portrayed as the enemy from within. Poland’s current president, Andrzej Duda, infamously claimed that “the LGBT are not people, but an ideology” that threatens the national body and it is “worse than communism.” That kind of publicly sanctioned symbolic violence, was replicated by some eager local authorities who proclaimed themselves to be “LGBT ideology-free zones.” All this culminated in a brutal police crackdown on LBGTQ activists in the summer of 2020, who yet again have taken to civil disobedience in self defense.

Women and Queers under the white-and-red banner

The protests that began in Poland in late October 2020 are different. We are witnessing an alliance between different groups disenfranchised by the current government, with women and LGBTQ at the helm. The moment we are in right now is key, as we are witnessing the formation of a coalition of diverse groups that have been excluded by the ruling government, particularly women and queers – or “pedały,” an all-encompassing highly derogatory word for the entire LGBTQ community, which is now being reclaimed by the activists. In sociological terms, a social movement emerges when diverse groups of people realize that they share a common goal, which cannot be achieved by legal-institutional means, and that the state either does not work at all, or is working against them. This is the situation we are currently facing in Poland. With the collapse of the rule of law, people have come to understand that women’s rights and the rights of the LGBTQ community can be only won when demanded directly by citizens in the streets.

The large representation of LGBTQ people and symbols at the protests initiated by #StrajkKobiet is proof that such a coalition is being formed in front of our eyes. At the same time, social movements are often decentralized, comprising many ideological offshoots, using different strategies for their fight, hence the visible eclecticism of the ongoing protests both in content and form. The Polish government recently banned demonstrations because of the pandemic, so people claim to be going for “walks” instead. They have been doing so throughout local Poland, where such civic activity was previously unheard of. The majority of protests against the central government since 2015 have been restricted to the protesters in big cities, or solitary acts of defiance elsewhere, until now. Since October 22, 2020, provincial Poland too has been engulfed by social discontent. Equally, the participation of the LGBTQ community shows that the current protests are a critical moment in the shaping of a broad grass-roots social movement with potential for making real social change. This decentralized, localized revolution, led by the alliance of women and queers, is a chance to truly introduce equality in Poland.

Dr Helena Chmielewska-Szlajfer is an Assistant Professor at Kozminski University and Visiting Fellow at LSE Department of Media and Communications.

Dr Roch Dunin-Wąsowicz is a Fellow at the UCL Social Research Institute and Research Officer at the LSE Conflict and Civil Society Research Unit.

Helena and Roch are members of the TCDS community in Europe (NSSR/ Europe) and they are both New School for Social Research (NSSR) alumni (Sociology). Roch is also an alumnus of Lang College.

This text was originally published on the LSE EUROPE blog.