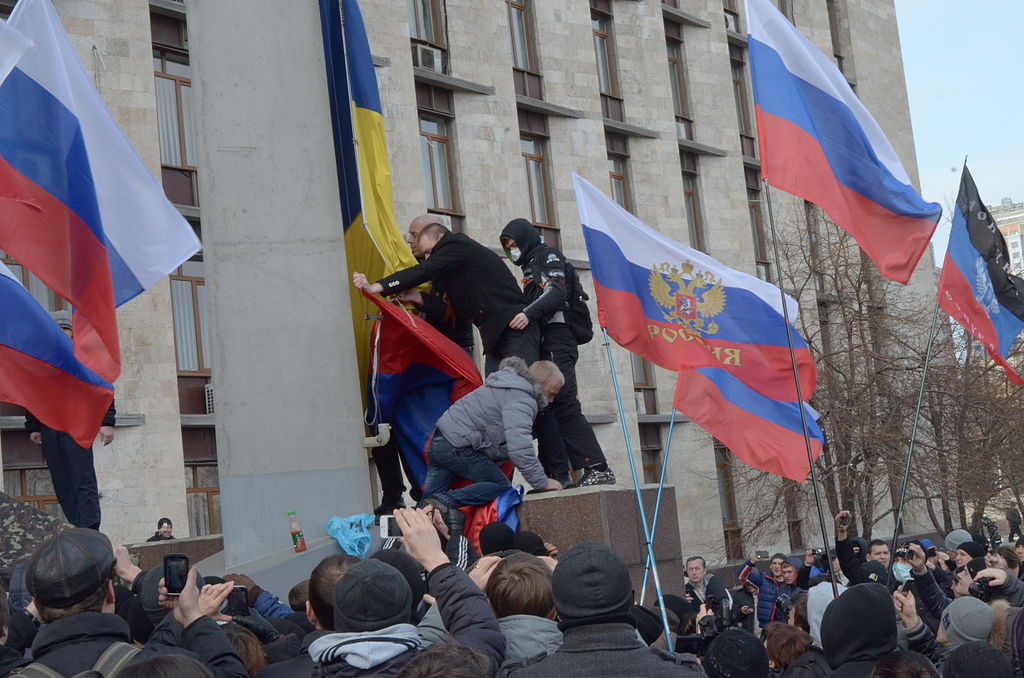 During a regular meeting of Democracy Seminar, the worldwide committee of democratic correspondence, last Thursday morning, (February 24th), we discussed the unfolding crisis in Ukraine and agreed to write up and share our quick responses from our different locations. In this post, perspectives from Romania, Lithuania, and Slovakia, sent to us soon after the meeting. Jeffrey C. Goldfarb

Thursday, February 23rd. I woke up this morning to a changed world. Russia is bombing Kyiv, millions of civilians in Ukraine are on the move trying to get out of the way, and I am sitting in my living room trying to figure out what I can do about this and for the folks affected by this disaster. Today refugees are on my mind more than anything else. At the border with Ukraine, in Sighetul Marmatiei, there are people in cars and on foot lined up for two kilometers, hoping to get into Romania. Thousands of people. Those who have both Romanian and Ukrainian passports have been allowed in already. The rest are anxiously waiting for the lines to move. The Romanian government estimates that around half a million refugees from the Ukraine will try to get into Romania in the near future, out of around 5 million refugees, an estimate of the international observers of this conflict.

What capacity does the Romanian government have to help these refugees? Some officials in the government are asserting that Romanian citizens have nothing to worry about and the country can meet the challenges of this refugee influx. Except that since World War I Romania has never had to deal with this sort of refugee crisis. In the last few hours, the Prefect of Maramures, the county where the Sighet border crossing is located, stated that they have a total of 200 beds available for refugees for the accumulating thousands on the border.  How will availability and access be decided? First come and first served? Children first and adults later? Elderly first?  I worry a great deal about the consequences of both action and inaction on this matter. The population living in the region close to the Romanian border are mixed ethnically, with Roma in significant numbers. Will that make a difference in how people are allowed into Romania and where they are sent once they get in? Will the rising wave of anti-Roma sentiment in Romania play a role in how this refugee crisis is likely to play out?

I have no answers. I am anxious for my native region and country, and I feel completely powerless.

I am writing to you in order to make a plea for Ukraine, Lithuania, Central and Eastern Europe and the democratic world.As we are all struggling to find a way to live in and deal with this new reality, I want to first of all thank you, for raising the issue of the war crimes being done against the Ukrainian people, there are two other things that need to happen:

1. There is a need to document war crimes. Russia’s army is an army of savages, we know that not only from distant, but recent history, with Putin in charge. Years ago my friend researched Russia’s military actions in Chechnya for Human Rights Watch. They documented, among others, a bomb attack on a market killing lots of civilians who were buying food after work; a deliberate attack on a refugee convoy trying to flee Grozny, the capital of Chechnya; and the wholesale destruction of Grozny by bombs that weren’t aimed at any military target whatsoever. After the bombing campaign, Russian troops moved in and the horrors continued but looked different: mop up operations in villages during which civilians, including women and children, were brutally murdered; detention camps were detainees were systematically tortured; and, finally, people simply started disappearing by the hundreds and eventually thousands after being detained by Russian troops. Sometimes mutilated bodies were found later in unmarked graves but most were never found.

I have little reason to believe that the Russian army has changed since. It got away with almost all the destruction and murder it committed back then and considering the bravery of Ukrainians to resist and the long history of Russia’s extremely bloody assaults on Ukraine, the life for simple people in Ukraine is yet to turn into a nightmare of epic proportions.

So, if you have any relationship with international civil and human rights organizations as well as with donor organizations, please make sure you raise this issue, the research and money needs to go into it along with the humanitarian aid.

2. The second one, is more in line with your day to day jobs. I do believe indeed that Putin is aiming at reshaping the entire geopolitical map of Europe and beyond. First aim, to retake the republics of the USSR, then – to dismantle the entire post war world order, based on transatlantic and European unity and cooperation among democracies. Both alliances rely on a certain type of conduct: cooperation, mutual trust and joint commitment. This is what he aims at. And not only his, he is an old delusional monster that managed to build a wide and well functioning junta around himself. In a way he is a hostage to it, because it is the only way he can be secure in his position. But one day that criminal system will have to take over and put another figure in charge, in order to maintain its power it has to change the geopolitical map around it, so it would not be the only junta run state among democracies. Once the Russian troops entered Belarus last week, it was clear that we, the Baltics, are in imminent danger. It would take them a couple of hours to get to Kaliningrad and cut the Baltics completely from the rest of NATO. This is why you guys, involved in the public debate in the US, have to think already about the next elections in the US If Trump or someone like him returns to the White House, Europe will falll. As much as Biden may be not the ideal President, I reckon his experience of governance and politics during Soviet times is what makes him understand what is at stake here, but most people in the US DO NOT Just like many of them still need to understand why Biden’s involvement in the conflict in Ukraine is a political win (even for the US) why someone should vote for a President who is involved in Eastern Europe affairs. The moral outrage is good, it shows that we still are worthy of the name humanity, but that is not the basis on which many voters cast their vote.

With a broken heart for Ukrainian friends,

Slovakia (as a neighbouring country to Ukraine) has been shocked and terrified by the fact of the Russian aggressive invasion in Ukraine  on 24 February 2022. The Slovak President, the Prime Minister and the Head of the Slovak Parliament immediately condemnedRussia´s aggression and clearly addressed their full support to Ukraine. In addition to the official statements, numerous civil society initiatives demonstrated their full support to Ukraine and its citizens, and presented a number of tools to help the war refugees. The first crowdfunding  campaign has started through Antena – a network of independent cultural centres in Slovakia. Numerous other non-governmental organisations, charities and churches also offered their support to Ukrainian war refugees. Open protests against Russia were organised in Bratislava and Banska Bystrica already on the first day of the Russian invasion. Universities all over the country (with a large number of Ukrainian students) discussed and started to offer help to Ukrainian students. Solidarity of Slovakia with Ukraine is obvious and strong. Previous pro-Russian (and pro-Slavic) voices from various opposition and Neo-Nazi parties and groups have become silent (for the moment), but it is clear that they are developing a new narrative (the U.S. and the “West“ responsible for the conflict and provocation).