Memory Politics in an Illiberal Regime 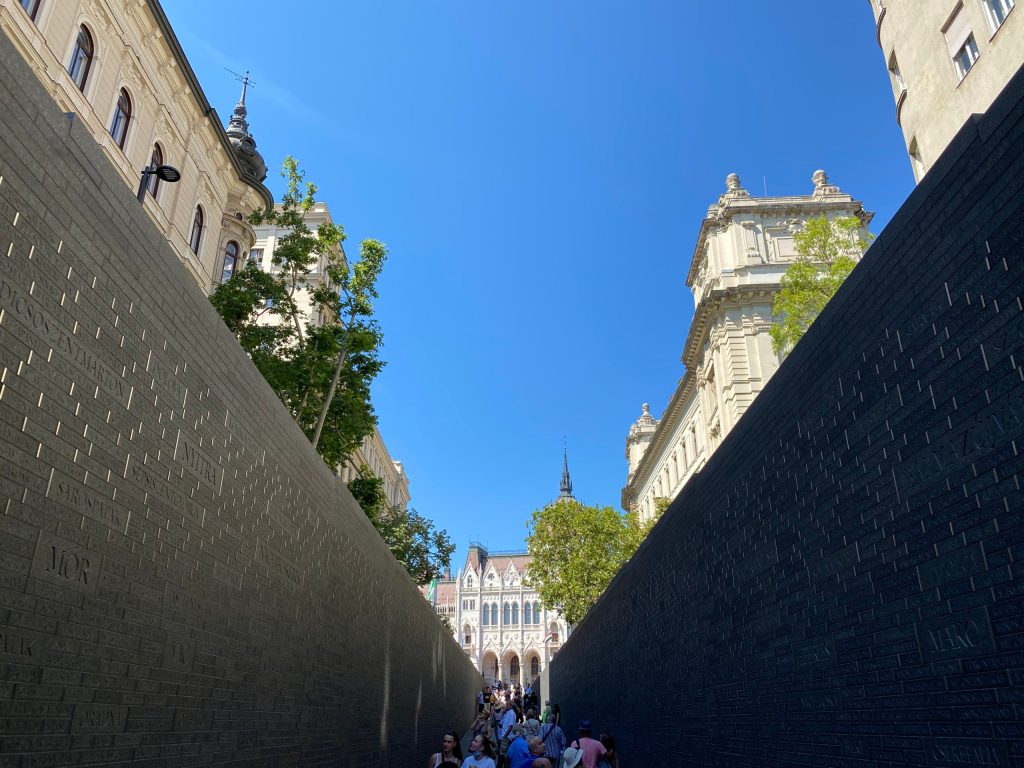 Memory Politics in an Illiberal Regime

As problematic monuments are being brought down in recent anti-racist protests around the world, Hungary, in contrast, saw the completion of a deeply flawed and tone-deaf memorial.

Built for the centennial of the Trianon Peace Treaty, the “Memorial of National Unity” in front of the Hungarian Parliament has a minimalist style echoing that of the Vietnam Veterans Memorial, the Yad Vashem, or the 9/11 Memorial. However, the new Trianon memorial represents a troubling contradiction: it draws on an international aesthetic originally created to honor the loss of human lives to express a quintessentially ethnocentric event and perspective on history.

The memorial, despite its name, does not represent a national community or seek to express what unity means for Hungarians today. Rather, as if stuck in time a century ago, it mourns the loss of former territory and glory. Much like the populist nostalgia of Trump or the Brexiters, it weaponizes self-victimization and isolationism while silencing an oppressive past. Instead of helping a democratic community tackle the legacy of a difficult historical event, it fuels the politics of resentment undergirding an illiberal regime.

2020 marks a peculiar centennial for Hungarians: on June 4, 1920, the Trianon Peace Treaty was signed, bringing the end of the old Kingdom of Hungary and creating modern-day Hungary. Named after the Baroque palace in Versailles where the Hungarian delegates signed the document, the peace settlement reduced the territory of the new state by 72 percent and annexed these areas to the neighboring states that emerged on the victorious side in the First World War.

While the population in these territories – now part of present-day Romania, Serbia, Croatia, Slovenia, Austria, Slovakia, and Ukraine – was majority non-Hungarian, around 3.3 million Hungarians also found themselves outside the new borders. Today these transborder Hungarian communities constitute one of the largest ethnic minority populations within Europe.

The Trianon treaty had left a deep scar in Hungarian collective memory. The drastic border changes which caused the separation of thousands of families and, in several absurd cases, of entire cities, were traumatic for entire generations. Moreover, in the postwar years around 350,000 war refugees fled to the new Hungary, many having to live in squalid conditions like train wagons, warrens, and barrack-rooms for decades. Yet the legacy of Trianon within memory politics has little to do with historical experience and personal trauma. In the past century, it became one of the constant and central fixtures of Hungarian political culture, acquiring mythical status in the ahistorical imaginaries of the national past.

Since 2010, as part of its populist rhetoric and practice, Viktor Orbán’s right-wing government set about to fully exploit the negative symbol of Trianon. After his party, Fidesz, secured a two-thirds majority, the Hungarian Parliament declared June 4 as the “Day of National Unity.” Next, it passed legislation intended to grant Hungarian citizenship to transborder ethnic Hungarians in an expedited manner. Besides the symbolic aspect, this gesture was motivated by electoral strategy.

The overwhelming majority of those 1.1 million people who received the citizenship – and the corresponding right to vote – supported Fidesz in all subsequent elections. Under Orbán, the question of how the country should relate to neighboring Hungarian minority communities became entangled within an antagonistic, self-victimizing, resentful, and xenophobic worldview and understanding of regional history. Illiberal populist memory politics achieved a cynical synthesis: transborder solidarity and a radicalized Trianon-cult became lucrative political instruments in a strategy for continued electoral success.

By 2020, the Trianon-paradigm had won, becoming a topic that all cultural and political actors in Hungary endorse in one way or another. Commemorative events on June 4 ranged from nationalist pathos and nostalgia to outright revisionism. In Budapest, citizens were asked by their newly elected liberal mayor to observe a moment of silence at 4.30 PM in remembrance of the Trianon Treaty. At that exact moment, at a government-sponsored event in Heroes Square, one hundred professional dancers swung into motion to honor the anniversary through folk dances and music from the transborder regions. The Hungarian Scout Association initiated a project called the “Fire of Togetherness” whereby 6,103 fires were lit on June 4 in 74 countries by Hungarians supposedly “cast astray” into the world because of the Trianon treaty.

On the following day, the Sixty-Four Counties Youth Movement, a radical right-wing group that openly calls for the revision of the treaty, marched through Budapest carrying banners which read “Justice for Hungary.” The Prime Minister’s own position was close to that of the far-right group, declaring in his commemorative speech that the “West raped the thousand-year-old borders and history of Central Europe [and] turned our country into death row,” and adding that “we will never forget that they did this.” Present-day Hungary thus remembered its hundred years of existence by mourning and resenting the very event which brought it to life.

The main Trianon memorial recently built in Budapest has a strikingly mournful and somber tone. As a site of memory, it is intended to represent the mainstream Hungarian interpretation of the Trianon Treaty for domestic and foreign audiences. The construction’s disheartening look comes from its resemblance to the entrance of a tomb: a 100-meter-long, downward sloping ramp leads the visitor into a fourteen-feet deep dark hole cut into Alkotmány street, where they encounter a fractured granite block with an eternal flame at its core. The walls of the ramp are also made of black granite and display the engraved names of the 13,000 cities, towns, and villages that made up the pre-Trianon Kingdom of Hungary.

Its style is inspired by an international aesthetic, yet the project was commissioned by the state without any public discussion or input on the design.  The visual language of this memorial is dissimilar to the tens of thousands of private or communal Trianon memorials across Hungary that rely on the revisionist imagery of the interwar Horthy regime, ranging from maps of “Greater Hungary,” Trianon-crosses, and weeping angels to pagan funeral poles. Instead, the memorial appropriates an international architectural form intended to express universal human suffering and uses it to the opposite effect: showcasing a narrative that is inward-looking and ethnically coded. Despite the modern feel, its style is informed by a revisionist mindset that reduces the complicated phenomenon of the Trianon treaty to a focus on the “loss” of territory.

After the plans were made public in 2019, historians were quick to point out the problem with the list of places that would be engraved. Instead of reflecting an authentic snapshot of the Kingdom’s geography in 1913, many of the names on the list were the result of decades of forced Hungarianization. Late-nineteenth century nationalist policies had forcefully changed around three thousand traditionally Romanian, Slovakian, Serbian, or German names throughout the country.

The aim was to erase local multi-ethnic, linguistic, and socio-cultural diversity and replace it with a distorted homogenizing Hungarian glaze. Such oppressive tactics were widely used by the British colonials, and, closer to home, they are reminiscent of the nationalist policies directed against the Hungarian minority in Ceaușescu’s Romania during the 1970s-80s.

The contradictions embodied by the memorial are jarring. It is grotesque enough that the memorial commemorates Trianon by using one of the deeply contentious tools of discrimination that had  caused the eventual dissolution of the old Kingdom. Yet to claim to honor crossborder Hungarians by adopting colonial tactics used against them under communist dictatorship is truly thoughtless.

The memorial, however, has even more sinister connotations. The international aesthetics of memorialization that it relies on emerged to represent unprecedented and unfathomable human tragedies such as the Vietnam war, the Holocaust, and 9/11 attacks. In these memorials the display of names of the dead is aimed at reclaiming them from oblivion, preserving their individual identity, and at spatially depicting the sheer size of the human loss.

The Budapest construction is especially similar to the Vietnam Veterans Memorial in Washington, D.C., which displays the names of those killed or went missing in action during the Vietnam war. Maya Lin, the creator of the site, intended the memorial to “bring out in people the realization of loss and a cathartic healing process.”

The aesthetics of the Trianon memorial draws a moral equivalence between the victimization of civilians or forcibly mobilized soldiers and the victimization of the abstract “nation” represented through ethnicized territory. The focus is not on the human dimension of a truly difficult historical event, but on past territorial greatness and its loss. According to the memorial’s visual message, the displayed cities, towns, and villages – both within and especially outside of present-day Hungary – need to be remembered because they are lost, missing, dead. But can the acceptance of such a narrative of loss really lead to anything like cathartic healing? What kind of unity is imagined in such a macabre vision?

Despite the nationalist possessiveness emanating from all Trianon memorials, the landscapes, the cities, and the people that ended up in new countries after the treaty, were neither lost nor dead in any comprehensible sense. Accepting a narrative of loss introduces an unnaturally dark imagery, equating neighboring countries with ideas of death and destruction. Not only is this historically inaccurate, it diminishes the agency and hundred-year existence of minority Hungarians in neighboring countries.

Finding themselves under new administration and new languages after the Trianon Treaty, they created complex and resilient communities that took on challenges that were specific to them and also those that impacted everyone living in Central and Eastern Europe. Some members of these communities assimilated into the majority society, but most accepted what László Végel, a Hungarian writer from Vojvodina (Serbia), calls the “centaur-like nature” of minority existence: oscillating between languages and cultures while taking their plurality as a given. This state of being can be a gift and a punishment at the same time but never the sign of a lost life.

Time had not stopped at 4:30 PM on June 4, 1920, as the engravings on the Memorial of National Unity wish to suggest. The supposedly “dead” cities mourned on the black granite walls – among them my hometown in Transylvania (Romania) – are home to some ethnic strife, to a sea of ethnic indifference, and some fruitful cross-ethnic collaboration, but they are very much alive. This life, with its otherness and contemporaneity, is invisible in the ethnocentric perspective that only wants to see a glorified “imaginary homeland” – but not real cities or people.

Memorials are built with the purpose of condensing complex and often contentious historical phenomena into the foundation stones of political and national identity. The architecture of memorialization is a form of collective pedagogy, aiming to instruct posterity about how to interpret the past. At best, memorials are symbolic tools within the public sphere, aiding democratic communities in the articulation of common goals. At worst, they are unilateral imprints of ruling elites and their narrow instrumentalization of the past – undemocratic performances for the present and not reflections on the future.

Intended to express a sense of unbounded togetherness, the form and the framing of the Trianon Memorial in Budapest communicates an ethnocentric message of loss and resentment. It is a political tool that propagates a negative national symbol, a black hole that collapses history. Instead of asking what unity and national identity could mean today, it produces a schizophrenic tension between an imaginary, ahistorical conception of a national past and people’s personal, multilayered, and contemporary understandings of self. Like all the memorials to this hundred-year-old Hungarian obsession, it does not step outside of entrenched narratives and does not wish to heal – but rather to perpetuate historical trauma for political gains.

Szabolcs László is a PhD Candidate in History at Indiana University, Bloomington.