Is Some Version of Our Future Now Playing Out on the Streets of Minsk? 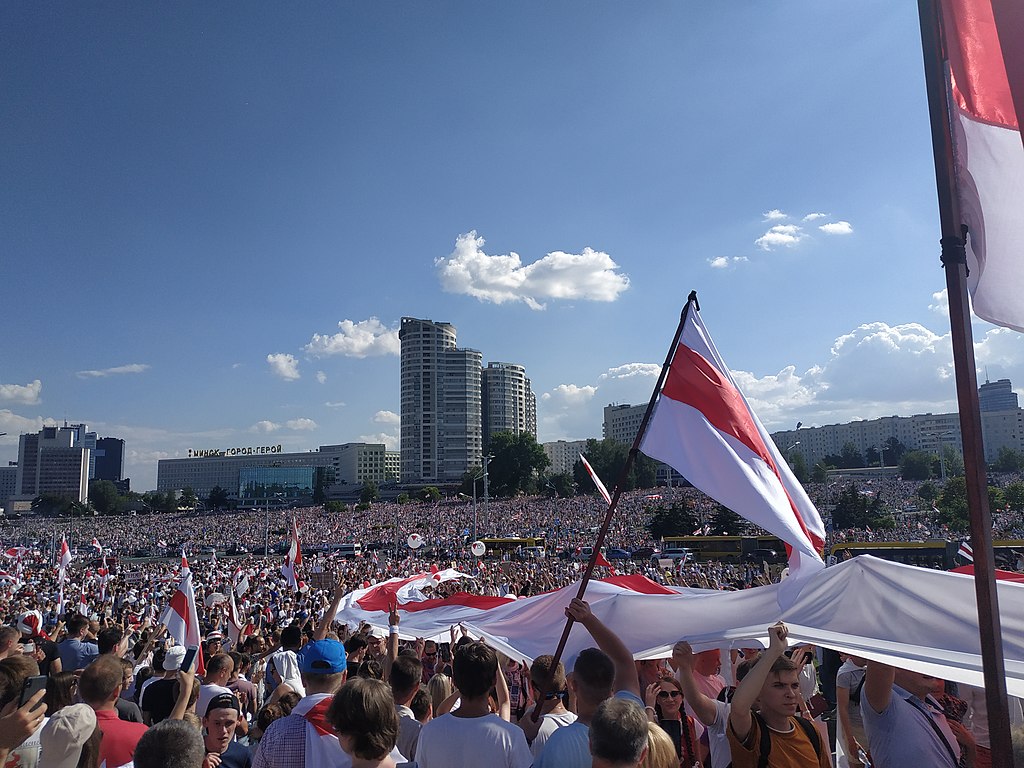 Is Some Version of Our Future Now Playing Out on the Streets of Minsk?

I have no particular expertise about Belarus and nothing profound to say about this conflict.

Belarus’s longtime President Alexander Lukashenko is a dictator who rose to power on the basis of nationalist appeals and has sustained his power, for over a quarter of a century, largely through corruption and repression.

And a political opposition and a mass movement, led largely by three brave women, has taken to the streets to contest the staged election that Lukashenko claimed he had won with 80% of the votes, a claim that begs credulity.

How will this contest play out?

We can hope. But we can’t know.

But we can also wonder and worry: is this the future here in the U.S. too?

Trump is no Lukashenko. Yet. Many things about these two countries are so very different.

But Trump is an autocrat who, like Lukashenko, craves power above all else. He too has demonstrated a willingness to lie, cheat, steal, defame, and deploy force to quell his opponents. He too has indicated in so many ways that he is disposed to corrupt the upcoming November election, inflate his vote total, accuse his opponents of treason, and refuse to recognize an electoral defeat.

So as we watch what is going on in Belarus as sympathetic spectators, we must also watch as citizens who may soon be facing a very similar—not the same—set of challenges. The probability of this may not be high. But it is higher than anyone thought even a few years ago, and too high to risk complacency.

There has been blood in the streets of Minsk over the past week. And the detention of many members of the political opposition. Two of the leading opposition politicians, including Svetlana Tikhanovskaya, who ran against and may have beaten Lukashenko,  have been forced to flee the country. But there has also been organized resistance, most of it nonviolent.
Readers ought to pay some careful attention to the account presented in “Belarus riot police drop shields and are embraced by anti-government protesters,” a story which dropped on Friday, August 14th, at CNN, and is worth quoting at length:

At least 50 Belarus security personnel in riot gear dropped their shields and were embraced by anti-government protesters in Minsk, as demonstrators chanted “brothers” at the police.

Belarus authorities say longtime President Alexander Lukashenko won 80.1% of the vote, in a poll which many believe was rigged.

A crowd estimated by CNN’s team in Minsk to be tens of thousands of people marched through the capital on Friday in revolt against the strongman leader Lukashenko, who has ruled the country for 26 years.

Opposition groups claim the election was marred by widespread ballot stuffing and fraud in order to keep Lukashenko in power, while the independent monitoring group “Honest People” said that according to its data, Tikhanovskaya had won in at least 80 polling stations across Belarus. Tikhanovskaya, who fled to Lithuania after the vote, on Friday called for city mayors to organize peaceful protests this weekend, and asked her supporters to sign an online petition demanding a vote recount, with the presence of independent observers.

. . . . There had already been signs this week of the country’s military and police officers apparently turning against Lukashenko and showing support for the opposition. A video posted on Instagram by a man named Evgeny Novitski shows his brother — a former special forces officer — throwing his uniform into a trash can, saying he is not proud of his job anymore.

“Hi all! I gave an oath to my people, and looking at what’s happening in Minsk right now, I can’t be proud of where I’ve been serving, and so, I can no longer keep this uniform at home,” the former officer says.

Another video posted by Belarusian TV station Nexta, shows a police officer named Ivan Kolos saying he refuses to follow “criminal orders.” He urged his colleagues to not point guns at peaceful people and be with them instead. He said he would take orders from Tikhanovskaya, not from Lukashenko.

. . . The growing outcry prompted some Belarusian authorities to apologize late Thursday, a reversal from their previous rhetoric promising a severe response to protesters.

“I want to take full responsibility and apologize in a humane way to these people … I’m not a bloodthirsty person and I don’t want any violence,” Belarusian Interior Minister Yuri Karaev said in an interview with a state TV channel ONT.

There is no reason for optimism about how this situation will be resolved in Belarus. But as we offer the protesters solidarity, we ought also to be prepared to learn from what they are doing there.

As Jamelle Bouille wrote in Friday’s New York Times, and as many others have been saying for some time, the results of the November election will almost certainly be contested, and Trump will almost certainly attempt some version of what Lukashenko is attempting. And we need to be prepared to take to the streets, non-violently, in ways that truly demonstrate a commitment to democracy, and that can hopefully persuade mayors and governors and bureaucrats and police and the military that we are in the right and that the autocrat must go.

This piece was originally published on the Democracy in Dark Times platform.