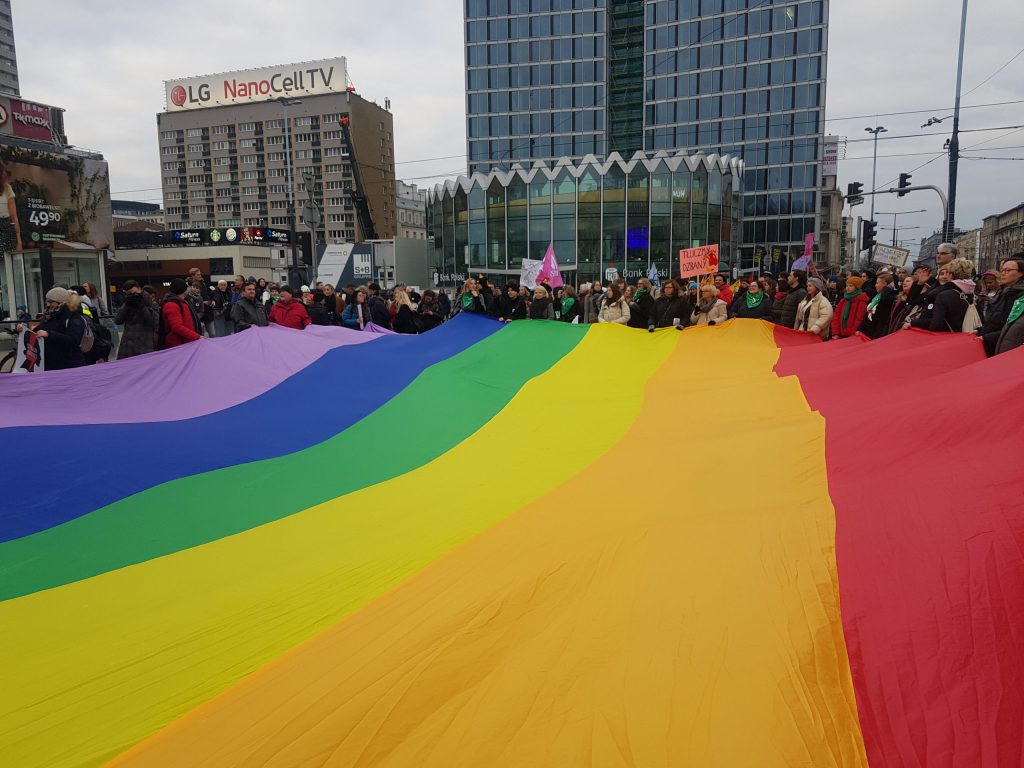 Anti-gender campaigns in a time of crisis

We may have expected that a major health crisis would result in an easing of ultraconservatives efforts to limit the rights of women and minorities. The reality proved to be different. In March 2020 Polish Archbishop Wacław Depo claimed in an interview that “coronavirus is just one of many threats, along with wars and gender ideology,” whereas right-wing journalist Witold Gadowski publicly expressed hope that the “pandemic may have good sides, because it may push aside issues such as gender, LGBT and other Marxist bullshit.” The efforts to introduce further limitations in access to abortion and assaults on LGBTQ community in Poland continued. In response, the women’s and LGBTQ movement employed new and innovative ways to protest such initiatives under the restrictions implemented due to the pandemic.

Poland may appear an extreme case, given the strength of the local Catholic Church and the legacy of gendered nationalism, but it is not the only country to  use Covid-19 to curtail women’s reproductive rights. Ultraconservative actors see in the current crisis a political opportunity to push for legislation and regulation banning abortion or limiting access to sex education. In the United States Republican governors of six states — Indiana, Iowa, Mississippi, Ohio, Oklahoma and Texas — took advantage of the pandemic to issue orders prohibiting abortion wholesale, except in situations where the mother’s life was at risk, under the pretext of managing necessary resources for those in need. Many conservative politicians and faith leaders around the world — Catholics, along with Evangelicals and orthodox Jews — interpreted the pandemic as God’s punishment for homosexuality, licentiousness and abortion. They either expressed the view that “gender ideology” is as dangerous as the virus itself or hoped that the current crisis will make people receptive of “traditional family” values and heterosexuality.

While statements comparing “gender ideology” to dangerous viruses, such as Ebola, are not new, it is worth taking a closer look at the struggles around gender and sexual democracy in a time of crisis. Such an analysis may help us understand the sustained structural affinity between ultraconservative anti-gender activists and right-wing populists, and which in turn may help us develop effective counter-strategies to oppose these forces.

Anti-gender politics of the Law and Justice regime

In mid-April, amid the rising global concerns over health, security and economic survival, the Polish government discussed two controversial citizenship bills related to reproduction and sexuality. The first proposal aimed to further restrict existing abortion laws in the country which already banned the termination of pregnancy, except in cases of rape, incest, danger to the woman’s health, and serious, irreversible malformation of the fetus. It was this last exception that the new law sought to eradicate; 700 or so legal terminations taking place in the country each year due to  birth defects. Thus, the proposed bill would almost completely end lawful abortions. The second piece of legislation, which was debated in the Polish parliament at the same time, was a citizens’ project to “Stop pedophilia” and, if passed, it would introduce a penalty of up to 5 years in prison for individuals who allegedly “encourage youth to start their sexual life.” While its advocates stated that the goal was to protect children from sexual abuse, in practice, the law targeted sex educators and anti-discriminatory workers, who, according to ultraconservative activists, use sex education “to groom and familiarize children with homosexuality” and convert them into homosexuals. After a turbulent debate, both bills were sent to parliamentary commissions for further work but the Polish president had declared that he would sign the law introducing further restrictions on abortion if it was to reach his desk.

Homophobic messaging has become a staple of the electoral campaign of President Andrzej Duda, who seeks re-election on the 28th of June. In order to mobilize hardcore supporters of Law and Justice Duda signed the so-called “Family Charter,” which includes pledges to prevent marriage equality for gay couples and to ban teaching about LGBT issues in schools. He also made international headlines in mid-June when calling the promotion of LGBT rights an “ideology … that is even more destructive than communism.” Clearly, the ruling right-wing party aims to entice homophobic sentiments to polarize Polish society even further, through propaganda eerily similar to the one employed in Nazi Germany.

These recent developments can be interpreted as a continuation of decade-long global anti-gender campaigns, which have included opposition to the ratification of the Istanbul Convention and to the implementation of gender mainstreaming in national and transnational regulations, fervent efforts to limit access to contraception, abortion and sex education, and also serious assaults on LGBTQ rights. Agnieszka Graff and I have been examining the anti-gender campaigns in Poland and abroad for over six years now, and while it is clear that the current anti-gender campaigns are rooted in the “culture wars” that emerged in the 1960s and 70s, this trend is a distinctively new wave of ultraconservative activism.

Opportunistic synergy between the anti-gender movements and right-wing populists

The anti-gender campaigns are hardly just a backlash against women’s rights. Today, ultraconservative pundits and activists focus on the concept of “gender,” which allows for linking women’s and LGBTQ rights with broader concerns over family, modernity and neoliberal globalization. This new wave operates in a novel socio-political context, which can be defined as “the populist moment.” According to Chantal Mouffe, the populist moment is “a new conjuncture” in which neoliberal hegemony is “being called into question by a variety of anti-establishment movements both from the right and from the left.” In some countries, including Poland and the United States, ultraconservative groups facilitated the right-wing leaders’ ascent to power, and now they thrive in their close alliance with right-wing populists. The anti-gender campaigns are clearly most energetic and effective in the countries where the ultraconservative religious actors allied themselves with right-wing populist parties.

In the context of the current crisis, however, the immediate goals of the anti-gender movement and right-wing populists in power (the Law and Justice party in Poland or Donald Trump in the US) are not necessarily identical. Ultraconservatives see the pandemic as a window of opportunity to curtail women’s rights and promote their agenda but, for leaders such as Mr. Kaczyński, the main goal is to acquire more power and prevent major social unrest. While some of the party representatives expressed public support for a total ban on abortions, and Kaczyński himself proclaimed in 2016 that his party would “strive to ensure that even very difficult pregnancies, when the child is condemned to death, or is severely deformed, will end in birth, so that the child can be christened, buried, given a name,” the party leadership in 2020, just as in 2016, decided to send the proposal for further debates.

This shows that the cooperation between ultraconservative anti-gender actors and right-wing populists follows the logic of what we call an opportunistic synergy: it includes political alliances, ideological affinities and organizational ties, but it does not mean that the policy goals of both parties are necessarily the same. While cooperation is mutually beneficial, these ties are by no means stable, nor do they lead to the same consequences in different contexts. Failed attempts to tighten abortion law in Poland in the last four years show that even in countries where democracy is in grave danger, mass protests can be effective.

Preventive measures against the spread of the virus, including a full lockdown, made protesting very difficult, but many Polish women decided to take a stand against the harmful bills proposed by ultraconservative groups. It turned out that even under the shelter-in-place order, it was possible to voice people’s dissent, to protest and to cooperate with others. Of course, organizing mass protests like those in 2016 and 2018, when over 200,000 women took to the streets, was impossible. Existing organizations and networks, such as Polish Women’s Strike (OgólnopolskiStrajkKobiet), decided to mobilize people by engaging in alternative forms of protests. People were encouraged to place banners and slogans on private balconies and in windows, block the centers of major Polish cities in cars and take part in so-called “queuing protests,” which involved standing in queues at stores located in central squares or in the vicinity of the Polish parliament. Together with Action Democracy (Akcja Demokracja), Polish Women’s Strike promoted an email campaign where people sent almost three million emails to members of parliament protesting these changes. Individual people and groups produced memes, videos, songs and artworks, which were later widely shared online. A group of young people – Zuza Karcz, Klaudia Borkowska and Kacper Parol – initiated protest action on Twitter and Instagram under the hashtag #waveofprotest (#falasprzeciwu), which successfully mobilized their peers – in just a couple of hours the hashtag was used thirty five thousand times. Many participants of this campaign also posted pictures with the symbol of the protest, a red lightning bolt, openly expressing their political views and convictions for the first time. Mainstream liberal media amplified these efforts which ultimately had a real political effect as the politicians, instead of rejecting the proposals, sent it to parliamentary commissions for further work.

Elżbieta Korolczuk is Associate Professor of Sociology, works at Södertörn University in Stockholm and at the American Studies Center, Warsaw University. Her research interests involve: gender, social movements and civil society. Korolczuk is also a commentator and women’s and human rights activist.