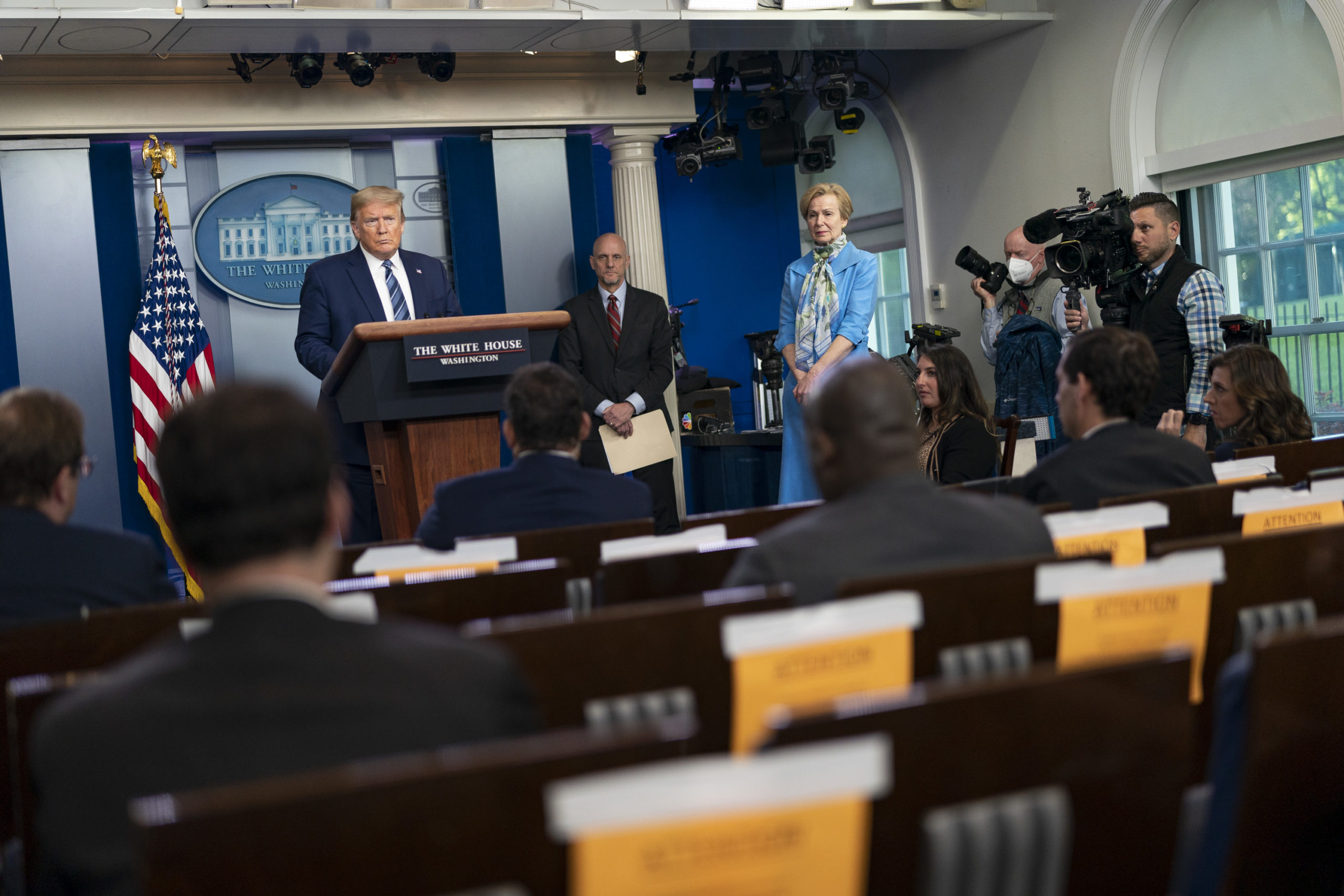 An earlier version of this post was published in the Verfassungsblog On Matters Constitutional.

“When somebody is the president of the United States, the authority is total. And that’s the way it’s gotta be. It’s total.”

Carl Schmitt, Germany’s most influential authoritarian jurist, has long played a major role in political and legal debates around the world. Because of his latitudinarian views of executive emergency power, Schmitt is now regularly referenced in discussions of President Trump’s extraordinary and probably unprecedented claims to presidential power. Trump’s knee-jerk hostility to the administrative state has helped spare Americans the worst consequences of his Schmittian legal instincts. Yet that hostility has come with its own high price.

Lawfare Managing Editor Quinta Jurecic was perhaps the first to ask, just a few weeks after Trump’s 2016 electoral victory, whether US citizens had elected their “first Schmittian President.” Since then, a veritable cottage industry on Trump’s alleged Schmittianism has emerged, from commentators on both the left and right. Writing in the New York Review of Books, Tamsin Shaw found clear parallels between Attorney General William Barr, a right-wing Catholic who has diligently defended the president’s most outlandish legal claims, and Schmitt’s own mix of legal decisionism and clerico-fascism. For their part, conservatives have pushed back against liberal and left-wing critics, highlighting Trump’s refusal to exert dictatorial authority on the scale Schmitt likely would have endorsed. Conservative editor Aaron Sibarium recently claimed in National Review that even those emergency powers Trump has exercised under the COVID-19 crisis have entailed little more than encouraging Americans to follow health guidelines laid down by the Center for Disease Control (CDC). Indeed, those political decisions having the greatest existential life-or-death significance have often been left to governors and local officials.

Admittedly, Trump’s latest Twitter-fired political jeremiads have further confused matters. Tweeting for the “liberation” of states subject to “stay-at-home” orders issued by Democratic governors is a bizarre presidential move, not the least because many Republican-run states are pursuing the same policies. And never mind that presidential calls for popular insurrection against state governments are probably unconstitutional. Trump’s odd vision of “total authority,” it seems, not only allows him to outsource emergency governance to state and local officials but then to pillory them for simply following CDC recommendations. At any rate, it remains difficult to imagine that Schmitt, who played a decisive legal role in the disastrous 1932 Preussenschlag which destroyed Weimar democracy’s last remaining center-left state government, would abide Trump’s advice to the governors to “call your own shots.”

Trump’s confused Covid-19 response has encouraged both liberal and conservative commentators to claim that the President’s Schmittian instincts have been fortuitously checked by his obvious character flaws. According to Sibarium, Trump “is too narcissistic to flex his muscle when the public good requires it, too obsessed with self-image,” and Americans have been luckily spared the worst consequences of the President’s Schmittian dark side. In a recent piece co-authored with Benjamin Wittes for The Atlantic, Jurecic describes Trump as a “lazy authoritarian,” who adores the glamor of Schmittian emergency rule but not the careful attention to policy details it potentially demands. Trump’s ominous Schmittian pronouncements are repeatedly undermined by his disinclination for hard work and preference for watching Fox News while eating fast food. In the final analysis, Trump “represents an executive that eyes the Schmittian executive enviously before ducking and taking cover,” typically passing the buck to others and avoiding hard political decisions.

However useful, such analyses risk personalizing and thus trivializing a structural contradiction at the heart of Trump’s administration: the president’s Schmittian instincts sit uneasily and probably inconsistently alongside his basically neoliberal view of government. Trump’s lackadaisical approach to the details of real-life public policy is not just a personal foible. Rather, it rests on deep skepticism about the capacity of government to do anything right, at least when it comes to the modern administrative state’s efforts to provide social security, education, and healthcare—meaning protection from disease and illness. Of course, Trump is no neoliberal when it comes to advancing global free trade or open borders for goods and services. Yet he remains at heart a neoliberal in his deep hostility to the administrative state’s efforts to check and regulate capitalism and other core traits of modern life. Precisely that hostility has served as the necessary glue for his alliance with mainstream Republicans who otherwise find his high-wire political antics unsettling, yet still share his longstanding preference for rolling back “intrusive” government regulations.

Schmitt understood that the sort of emergency dictator he had in mind presupposed an effective and indeed “strong state,” a “Leviathan,” outfitted with an imposing bureaucratic apparatus and a properly trained corps of loyal civil servants ready to serve as its institutional backbone. No fan of modern democracy or a progressive social welfare state, Schmitt correctly acknowledged that effective emergency executive rule required some core traits of modern stateness.

In sharp contrast, Trump has regularly sought to undermine the US federal government’s capacity to grapple effectively with a host of social, environmental, and health challenges. In advancing that agenda, there is little evidence of undue presidential narcissism or laziness. Trump’s politically canny picks for the Supreme Court, Neil Gorsuch, and Brett Kavanaugh were selected as much for their hostility to the modern administrative and regulatory states as their conservative views on abortion and same-sex marriage. As Michael Lewis has documented in The Fifth Risk, Trump has successfully fomented chaos and disorder within the federal bureaucracy, chiefly as a way of disabling its regulatory machinery. To the extent that a semblance of “order” can be identified, it tends to favor privileged private interests and their political allies, many of whom now conveniently oversee administrative agencies originally intended to regulate them. In Trump’s administration, the foxes really are in charge of the chicken coops.

Lewis presciently predicted in 2018 that a government bent on purging competent civil servants and scientific experts would necessarily fail in its basic performance of a broad array of essential but high-risk tasks. President Trump disastrously fired the US pandemic response team as a budget-cutting measure, reassigning a few of its members. The administration’s efforts at overseeing the Covid-19 response are now being coordinated by none other than Jared Kushner, presidential son-in-law, and real estate mogul. As late as March 10, while still in open denial about Covid-19, President Trump demanded drastic cuts to the CDC budget, which had called for every previous year. (Fortunately, Democrats had been able to resist the cuts.) The deeply unsatisfactory and arguably inept CDC response to the present crisis, which has left millions without access to proper medical equipment or reliable Covid-19 tests, is hardly unrelated to the president’s animosity to the administrative state. Morale is low in the CDC, the Food and Drug Administration, and other federal public health-related agencies. Many federal employees are eager to jump ship for jobs in the private sector.

Now Trump is aggressively calling for “reopening” the states and promising that “normal life will return soon.” His sustained attack on the administrative state has left Americans woefully unprepared for any return to normalcy. While Trump’s over-the-top Schmittian legal rhetoric plays to his hardcore authoritarian political base, the president is exacerbating the very real health crisis that Americans and people worldwide now face.

William E. Scheuerman, is Rudy Professor of Political Science at Indiana University, and the author of The End of Law: Carl Schmitt in the Twenty-First Century.