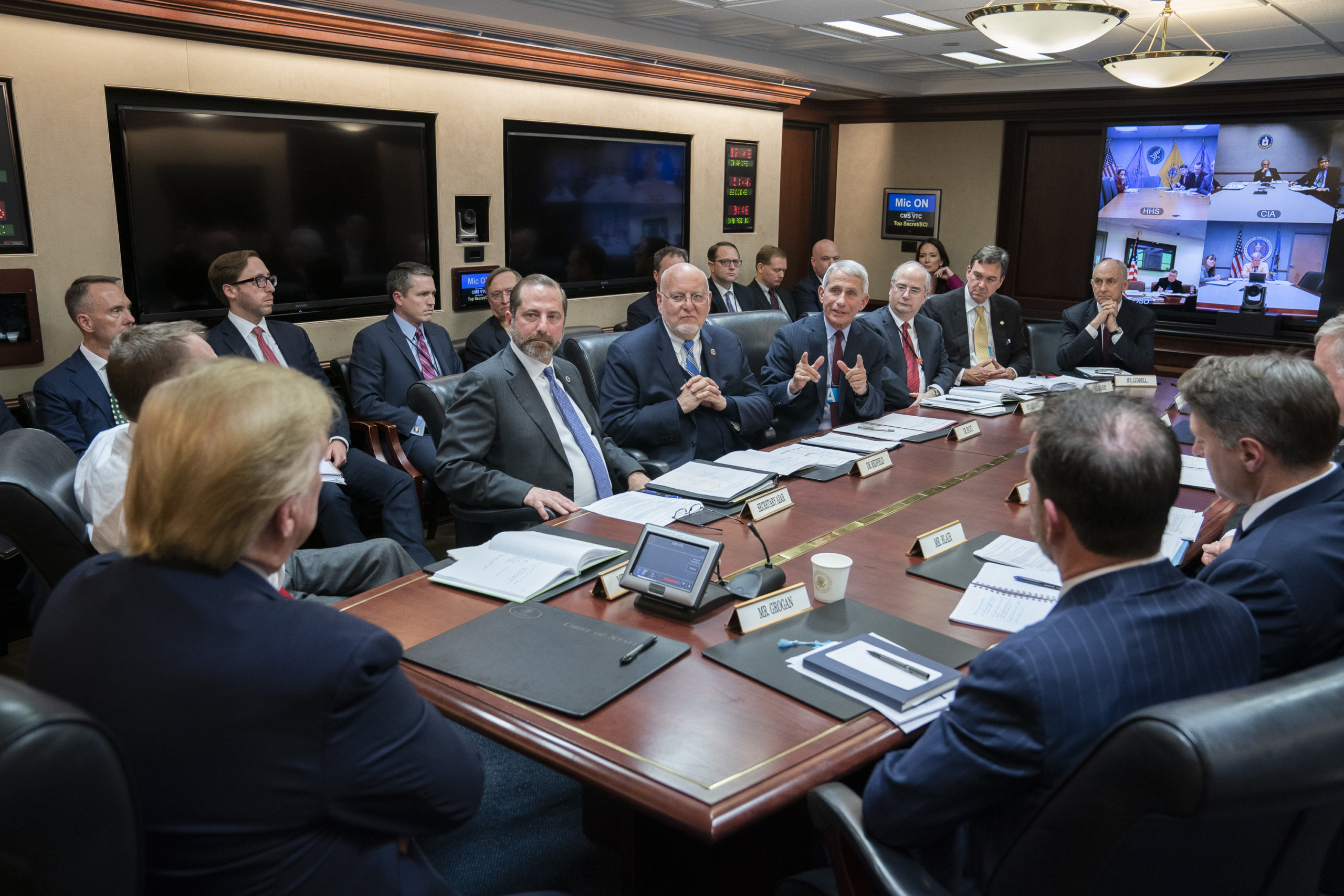 I wake up in the morning determined to examine one of Donald Trump’s press briefings, seeking to analyze the specific ideological and expressive dimensions of his presentation of self in my daily life. But I have to admit, I have failed. I have found it too difficult to watch an entire briefing from beginning to end. Paying close sustained attention to his live performances is just too painful.

My friend and Democracy Seminar co-chair, Jeff Isaac, keeps on promising his friends that he won’t watch the briefings anymore, but he can’t help himself. Just about every day, I read his cursing of Trump and his enablers on Facebook. Jeff can’t take his eyes off Trump, even as he finds him revolting. He’s made up of different stuff than me in this regard. For my mental health, I give the briefings only fleeting glances and then read reports from journalists whose job it is to keep us informed. That seems to be more than enough for me to discern the disturbing political patterns—and to vividly perceive the briefings, a tribute to the excellence of the White House press corps.

I find it enlightening to examine Trump’s performances through the lens of Erving Goffman’s dramaturgical sociology (as I looked at Biden and the Democrats in my last post), as Trump engages in expressive action to define himself and the situation of our country. Goffman would direct our focus both to how Trump works to “give” a good impression of himself and to the impression he “gives off.” We should also consider how his image management succeeds or fails in interaction with his audience: including the critical, the skeptical, and the supportive. How he performs and how his performances are received together expressively defines him and the situation of the nation.

As a member of his audience, he drives me crazy, something made worse by my current distancing from friends and relatives. Trump’s affectless expression of sympathy, his self-congratulation, his antipathy toward those who don’t praise him, his bitter dismissal of difficult questions, and his attacks on the journalists who ask them, repeat again and again, sometimes for more than two hours. I take this personally.

Meanwhile, I need to psychologically distance myself from Trump, who celebrates successful advances we are making as his own and sees any setback as the fault of others. I am thinking of my neighbor who returns daily from the emergency room. Last night, as we celebrated him with our drums and rattles—howling, as we learned is the custom in Missoula, Montana—I called out and asked how was it at Columbia Presbyterian Hospital. His reply: “no longer acute, but chronic.” Three other doctors live nearby, along with a physical therapist recruited for emergency work and a retired nurse practitioner who has volunteered, despite the strong reservations of her family. They are exhausted. And yet they persist.

Trump also persists. His ability to substitute his imagination of the way the world works for the way it actually works is astonishing, making it very difficult for the experts who accompany him. They are obviously playing a complex game. They try hard to convey the factual information and their expert judgments daily, as they simultaneously struggle to make sure that they don’t offend the boss and his supporters. Anthony Fauci is the master, though he has been repeatedly attacked by the fanatics, some of whom have issued death threats. Dr. Rick Bright wouldn’t walk the tightrope and was demoted when he questioned the value of the president’s purported miracle cure, hydroxychloroquine. And when the director of the Centers for Disease Control and Prevention, Robert Redfield, warned in an interview with The Washington Post that a second wave of Covid-19 in the fall is likely to be more dire than the current pandemic, he was forced to appear as if he were changing his position—though he didn’t—during the president’s briefing on April 22. The following day, Trump actually proposed crackpot cures: disinfectants and sunlight as treatments for Covid-19. The expert advisors remind me of my friends in Communist Poland in the 1970s and ‘80s, who tried to maintain their integrity while going through the motions as loyal citizens in the People’s Republic.

Trump is the snake-oil-salesman-in-chief. He appears to believe his miracle cures, and when he was questioned on his bizarre and deadly advice, he and his enablers pretended he was joking. I feel it can’t get worse than this, but then it repeatedly does.

And suddenly, over the weekend, relief seemed to have come upon us. It appeared that the daily circus was coming to an end with Trump’s tweet:

What is the purpose of having White House News Conferences when the Lamestream Media asks nothing but hostile questions, & then refuses to report the truth or facts accurately. They get record ratings, & the American people get nothing but Fake News. Not worth the time & effort!

The briefings were canceled, but almost as soon as it was announced—indeed, as I was still working on this piece—the White House then announced that the day’s briefing was rescheduled at the usual time. The narcissist-in-chief couldn’t stay out of the limelight.

There are obvious dangers for him. Many observers, including many Republican supporters and aides, are convinced that Trump is sowing the seeds of his electoral defeat in the briefings. Others watching in dismay argue that the events should not be broadcast live because they are more like Trump campaign events than public health briefings. New York Times columnist Charles Blow observed that Trump played the media in his 2016 campaign to great success and warns that he is doing it again.

On my optimistic days, I am heartened by the Republicans’ fears for November. On darker days, I fear that Blow’s concerns are well-founded.

For my circle of acquaintances, friends, neighbors, and relatives, the king’s madness is readily apparent, and it seems to us that it should finally be clear to everyone. We have a prejudice in favor of expert knowledge and see that Trump has repeatedly made matters worse: not understanding the pandemic threat initially, not perceiving Covid-19’s exponential growth, and believing that somehow it was nothing more than a weapon used by his opponents. Trump expresses disdain for those of us who don’t support him and for the truth that we depend on.

I know that for those who embrace Trump’s imagination as their own, he appears as a strong leader, protecting America with walls, border fortifications, bans on visitors from China and Europe, and the suspension of immigration. Trump’s supporters see that he’s been tough from the beginning, and continues to “fight the good fight,” as he wages war against his and their imagined enemies. In their interaction, Trump and his followers define this situation as real, and it is real in its consequences for them, as the Thomas theorem stipulates. They are together constituting a reality through their collective imaginations. Sharing a coherent definition, Trump’s supporters likely appreciate his briefings. He expresses support for them, as he fights those who denigrate him. His wager is that such a view can be sufficiently energized to prevail again electorally, as he did four years ago. Even as he is now condemning Fox News for its political correctness, he seeks to whip up his “base.”

At the moment Trump seems to be on the defensive. His advisors and allies are suggesting that he move away from the microphone. But he is also going on the offensive, celebrating himself and condemning his enemies, explaining any loss of support and popularity as a result of the crooked media.

I struggle to live with Trump, as do those in my social circle. In our world, Trump “gives off” a clear message of incompetence and ignorance in his gestures, words, and deeds. Even worse, he has blood on his hands.

But what is repulsive for those of us who oppose Trump is attractive for his supporters. Trump’s daily briefings, no matter how ludicrous they appear to us, may yet still serve to empower his base, as his rallies have done in the past.

One thing is certain: Trump is above all a polarizing figure. In his briefings, tweets, and indeed all his words and deeds, he provokes strong affective responses in both his opponents and his supporters. The passionate commitment of his supporters should not be underestimated. And those of us who oppose him have our work cut out for us. In the coming months, as the pandemic wanes—and then waxes again—I hope that we who oppose him will do so with all the power we can muster, drawing on our personal experiences, reaching out to those who share our deep concerns, respecting our differences, and working together.

I will say more about how I think this can be accomplished in my next post.

Jeffrey C. Goldfarb is Michael E. Gellert Professor of Sociology at The New School for Social Research and Publisher of Public Seminar.