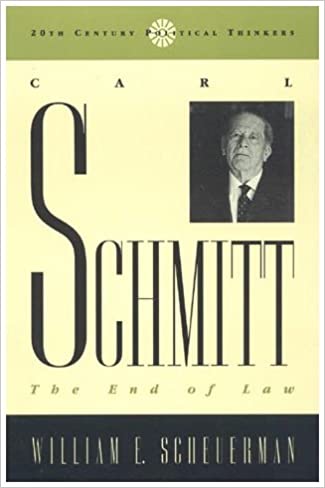 When I published the first edition of Carl Schmitt: The End of Law back in 1999, Schmitt and his ideas seemed primarily of historical interest.1 Accordingly, my efforts focused on understanding how one of twentieth-century Europe’s most creative right-wing legal thinkers could jump into bed with National Socialism, surely its most heinous political movement. I highlighted how Schmitt’s longstanding jurisprudential concerns ultimately encouraged him to participate aggressively in the creation of an identifiably postliberal legal order. By 1933, Nazism appealed to Schmitt because he mistakenly thought that it offered an answer to a legal-theoretical question that had always fascinated him: if general legal norms and rules —core elements of the liberal rule of law— cannot provide regularity or determinacy in law, how then might they be achieved? How could liberal law’s flaws, in short, be successfully transcended? Far more than mere opportunism came into play. Shockingly, Schmitt joined forces with the Nazis because he believed that only a more fully homogeneous corps of German jurists —“cleansed” of Jews and other so-called “alien” elements— could provide for the determinacy and regularity allegedly denied the liberal rule of law.

As the saying goes: “that was then, but this is now.” I had little inkling that Schmitt would soon become pertinent to present-day political developments. With the dramatic worldwide emergence of authoritarian populism, Schmitt’s thinking seems disturbingly relevant. As the Cambridge jurist Lars Vinx has correctly noted, Schmitt’s significance today stems from his “sophisticated redescription of the democratic ideal that pits that ideal into the service of political authoritarianism.”2 Unintentionally, Schmitt’s thinking also provides a vivid warning to those of who hope to resist democratic backsliding.

Schmitt’s political theory anticipated core traits of what we can now observe both in contexts where authoritarian populists have already fundamentally transformed political affairs (e.g., Hungary, Poland, Turkey), and where leading political figures are still eagerly trying to do so (e.g., Brazil, India, and the USA). Schmitt always insisted that liberalism and democracy are not only different but fundamentally antagonistic: the former supposedly subscribes to a narrowly individualistic, antipolitical notion of liberty, whereas the latter is an authentically political aspiration entailing substantial equality and far-reaching identity. Democracy’s realization can legitimately take authoritarian forms. Why? Deliberative parliamentary government and the rule of law, Schmitt idiosyncratically argued, constitute exclusively liberal but not democratic ideals.3 Identity is best generated by a strongman-regime where the executive directly manifests the people’s unified, homogeneous will. Plebiscites and referenda potentially have roles to play in this model of “democracy,” but not as instruments by means of which voters deliberate, gain a better sense of their interests, or render their rulers accountable. Rather, as one of Schmitt’s most astute contemporary critics rightly observed, “[f]or Schmitt…the democratic character of the plebiscite consists purely in an unorganized answer which the people, characterized as a [manipulable] mass, gives to a question which may be posed only by an authority whose existence is assumed.”4 Plebiscites and referenda become devices by means of which powerful and basically unaccountable leaders manage an inarticulate, politically subdued populace.

Authoritarian populism constitutes a strikingly similar attempt to jettison democracy as collective autonomy and public freedom for democracy as shared political identity and homogeneity. The former entails a commitment to open contestation between free and equal citizens and requires basic liberal rights (free speech, the right to assembly, and so on). In contrast, the latter reduces democracy to an exclusionary quest for substantial identity. It presupposes the existence of a unified homogeneous people, whose identity is then sharply juxtaposed to outsiders likened to threatening “enemies.” While democracy as public autonomy needs robust elected legislatures and independent courts, democracy as identity favors plebiscitary leaders claiming a monopoly over representing “the people” and its unitary will. As then presidential candidate Donald Trump announced at a May 2016 political rally, “[t]he only important thing is the unification of the people, because the other people don’t mean anything.” In Trump’s eyes, the “other people” were not “real Americans,” and he alone directly embodied those “real” Americans. “I am your voice,” he subsequently declared at the 2016 Republican Convention, before promising that “I alone can fix” the national crisis he depicted as an existential struggle.

The shocking implications of this degraded notion of democracy were on full display on January 6th, when then President Trump —in a speech immediately prior to the violent attack on the US Capitol— effectively incited his followers to riot, praising them as true “American patriots” who were simply standing up for the “integrity of our glorious republic.” Most disturbing of all is that we now know that those participating in the Capitol attack saw themselves as “real Americans” tasked with reversing an election they viewed as stolen by life-or-death political foes, those eighty-one million US citizens whose votes to replace Trump apparently “don’t mean anything.”

Authoritarian populists such as Trump hollow out democracy while mimicking its language and sometimes its forms. They practice staged or phantom democracy. Its leading figures, preoccupied with their public image and the vagaries of mass opinion, engage in a semi-permanent political campaign. Their mastery of new technologies and ability to manipulate the mass media, as Schmitt similarly anticipated, often proves decisive.5 Populist leaders play this game because they fear a loss of mass support and want to control and manipulate the populace. Public forums, consultation exercises, and experiments in dialogue and deliberation may even be deployed.6 Yet such devices get robbed of any real critical or democratic potential. Undesirable political candidates get harassed, constituency boundaries gerrymandered, and inconvenient electoral results miscounted or conveniently ignored.

Authoritarian populism also reproduces Schmitt’s deep hostility to the rule of law. Schmitt consistently rejected the traditional idea that the rule of law can effectively tame power holders by guaranteeing a measure of impartiality and some modicum of equal justice. As The Concept of the Political (1932) openly declared, “the sovereignty of law only means the sovereignty of those men who draw up and administer the law.”7 What matters about the law is not its general and impersonal normative framing but instead the concrete personal decisions made by those outfitted with power to apply and enforce it. The rule of law is always fundamentally a “rule of men” (or perhaps women, though Schmitt’s theory possesses obvious masculinist traits). Its promise to rule by impartial norms usually represents a partisan political weapon employed, when opportune, by political groups best able to exploit them against their “enemies.”

With clear Schmittian echoes, today’s authoritarian populists pay lip service to the rule of law, but when in power cynically remake legal practice according to the old adage “for my friends everything, for my enemies, the law.” They aim to transform law and courts into discriminatory political weapons, while conveniently looking the other way when political allies skirt or ignore the law’s boundaries. Thus their astonishing tolerance for blatant corruption from within their own ranks, while sanctimoniously targeting any hint of wrongdoing among political rivals. Theirs is a radically instrumental and deeply politicized view of law, with the usual boundaries between law and politics simply swept aside.

Trump’s example proves illuminating here as well. Under his watch, the erstwhile independent Office of the US Attorney General was nearly reduced to a collection of personal lawyers.8 Even ardent loyalist Attorney General William Barr was forced to resign during Trump’s final days, apparently because of his refusal to go along with the President’s plans to overturn the November 2020 election results. Trump regularly endeavored to jettison the rule of law for a hyper-politicized authoritarian legalism, what he dubbed “law and order,” targeting black protestors (Black Lives Matter), Muslims, “liberal elites,” undocumented immigrants, “the media,” refugees, and others whom Trump depicted as existential threats to “real Americans.” Repressively deploying the law when it suited his political and personal goals, Trump effectively treated his own endeavors —and those of his allies— as above the law. Even those who participated in the violent attacks on January 6th never faced condemnation from the President. Hours after he incited the mob to riot, and having obstinately refused to call out the National Guard to squelch the violence, Trump told his followers to go home, reminding them that “we love you, you’re very special.” He then added, “Remember this day forever!”.

Of course, Trump’s partisan supporters in the US Senate have since opted to spare him an impeachment conviction, an irresponsible decision likely to have terrible long term ramifications.9 Letting the riot’s powerful instigator go free, while prosecuting the small fry who participated in it who now face criminal charges, does not bode well for the rule of law. Still, Trump’s authoritarian populism appears on the defensive. Massive voter turnout in the November elections, coupled with a principled commitment to democracy as public autonomy among some members of Trump’s own political party, means that his quest for democracy as exclusionary political identity, at least for the moment, has stalled.

This suggests a final way in which Schmitt remains pertinent. The first edition of my book emphasized how Schmitt’s jurisprudence primed him to embrace Nazism. I now recognize that my argument might lead us to miss today’s real political danger, namely the possibility of an authoritarian populism that operates according to a logic adeptly theorized and endorsed by Schmitt.

To be sure, authoritarian populism’s fate remains up for grabs. I hope that we can successfully reverse its damage to American democracy, and that voters in Brazil, India, and elsewhere will soon put a stop to it as well. Elsewhere things look more bleak. In Hungary and Poland, for example, authoritarian populism seems relatively secure. Even so, it remains unclear whether it constitutes an identifiably distinct, stable regime type and not instead a transitional stage that may evolve into something worse. Because Schmitt not only provided a defense of authoritarian populism, but then enthusiastically endorsed an even more poisonous German fascism, his example provides a warning to anyone who refuses to acknowledge such perils.

Those of us trying to make sense of authoritarian populism can read Schmitt against the grain to understand its disturbing political and legal dynamics. Those worried about its developmental trajectory would do well to recall his disastrous political choices during the early 1930s.

2 Vinx, “Carl Schmitt and the Authoritarian Subversion of Democracy,” Philosophy and Social Criticism, Vol. 47, No. 2 (2021).